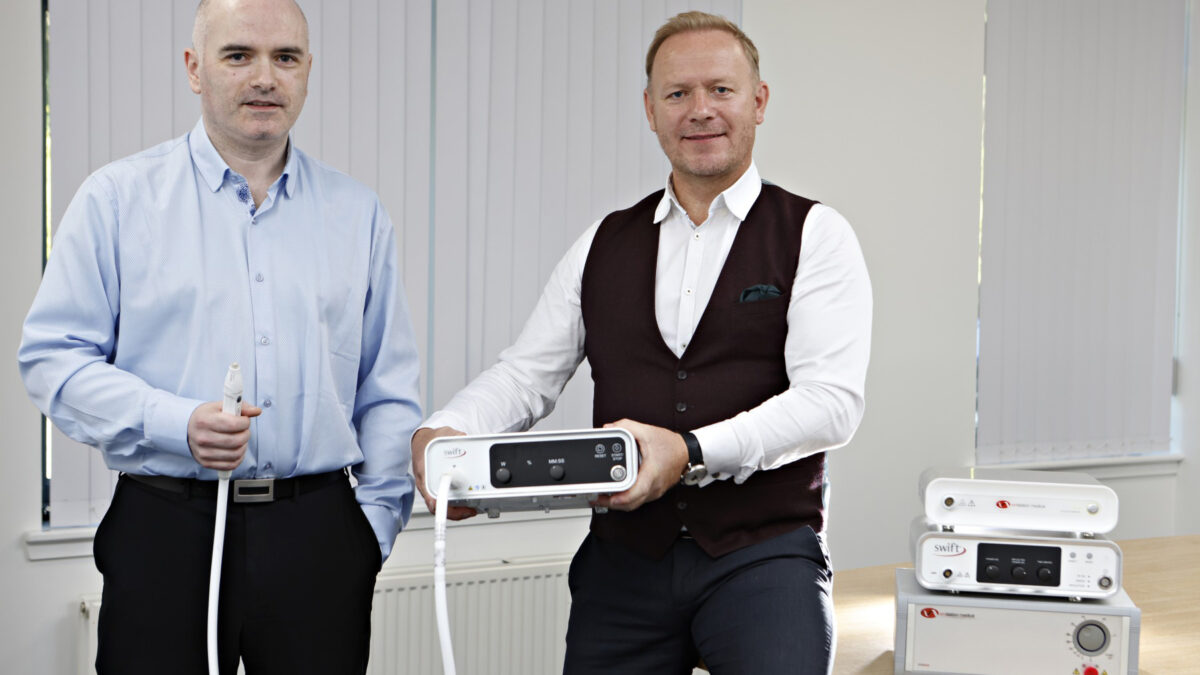 A Scottish med-tech company that produces specialist microwave generators to treat a range of skin conditions has acquired a US distributor.

Emblation has acquired Saorsa Inc as part of a two-year expansion programme and to fuel the next stage in its ambitious growth plan.

The company, founded by Gary Beale and Eamon McErlean, who met during their post-graduate studies at Edinburgh’s Heriot-Watt University, has already taken a foothold in the US.

As part of the seven-figure deal, Saorsa will now become Emblation Inc to spearhead growth in the US, having already built up an impressive record as the sole distributor of its pioneering Swift® Microwave Therapy technology in the country.

Gary Beale, co-founder and CEO of Emblation, said: “This is a huge step towards us achieving both our commercial and clinical goals over the next four years. The US is the largest global healthcare market and from an Emblation perspective, represents a major area for growth.

“The scale and potential impact of this one acquisition is massive for us. It is an exciting time for everyone in the firm, and I’m delighted we will now be integrating such an enthusiastic and energetic team to the Emblation global family.”

Saorsa, a firm headquartered in Orlando, Florida, is led by its founders, med-tech industry leaders, Chris McNamara and Pete Turnbull. The pair first met Gary Beale to spearhead the launch of the Swift® machine in Canada.

Mr Beale added: “When we began discussing our plans for the US market, they were determined to take advantage of the opportunity and as a result, they founded Saorsa alongside two investors and former colleagues in 2018.

Since then, Saorsa has been the exclusive supplier of Swift® in the US, rolling out more than 400 devices, with more than 1000 practitioners trained in its use and more than 50,000 treatments carried out on skin lesions.

However, following the acquisition, it is now expected to deliver even greater growth and is already recruiting new staff with ambitions to triple the number of Swift® devices in use across the US in the next three years.

McNamara, co-founder of Saorsa, added: “We are excited and energised to be officially joining the Emblation group. This acquisition was an important step for both companies to achieve our long-term ambition to establish Swift® as the market leader in microwave-based applications for the treatment of skin lesions.

“We understand the challenges facing US private practice and are committed to making an impact through innovation. We’ll be able to immediately benefit from shared capabilities and will sharpen our focus on accelerated growth for the US business.”

The creation of Emblation Inc in the US, follows the establishment earlier this year of Emblation GmbH in Germany and brings a third global business under the Emblation corporate umbrella.

The award-winning medical technology company is revolutionising the way microwave energy is used in healthcare. Its aim is to improve on traditional treatments, using the unique advantages microwaves deliver – accurate, repeatable procedures, and better clinical outcomes.

Swift® provides podiatrists and dermatologists with a new, precise, and easy procedure for soft tissue lesions. The treatment works by delivering a highly controlled dose of energy into the tissue, creating heat which stimulates an immune response. This delivers highly effective outcomes for stubborn skin lesions, such as warts and verrucae.

Emblation’s technology is transforming the treatment of HPV infections globally, and is widely used in dermatology, podiatry and oncology, with a number of disruptive applications under development in the fields of cardiology and gynaecology.

The firm was founded by Gary Beale and Eamon McErlean, who met during post-graduate studies at Heriot-Watt University in Edinburgh. The pair went on to launch Swift in 2016, as a radical new treatment in the podiatry sector.

Robots on march to help people with disabilities live independently

Scottish med-tech firm to double workforce after trials with Boeing

Upping the pace to fight the pandemic