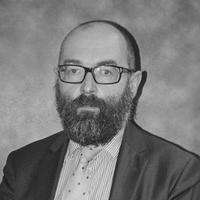 Featuring a ‘citizen view’, a ‘clinician view’ and an ‘adminstrator view’ the new technology – which is being built in-house by the NHS in Scotland – was shown to delegates at the two-day Digital Health & Care Festival in Glasgow yesterday.

The concept is based on work carried out by NHS Digital (NHS England’s digital organisation), which itself was inspired by the widely-lauded UK Government website – GOV.UK – but is being evolved by the NES Digital Service team based at the Bayes Centre in Edinburgh to meet the aims of the Scottish Government’s national Digital Health & Care strategy – which set out to create a ‘common architecture’ for all users of the health and care system.

Geoff Huggins, director of NES Digital Service, gave an overview of how the new service is being developed by a team that has expanded from three to 33 members of staff in 12 months, alongside the organisation’s head of product Rohan Gunatillake.

Huggins, a former Director of Health & Social Care Integration within Scottish Government, set out by trying to manage expectations in terms of the delivery timescales for the new platform, which he said in the last six or seven months had gone from having been widely accepted as a long term project, perhaps taking 10 to 15 years to have any impact, to something that people wanted to see delivered ‘now’.

“I guess this shows the challenge of having somehow built this expectation that people are now saying we want this, or something like this, now,” he said.” Acknowledging also the challenges of getting skilled people to come and work on such a project – when they could probably go and work in the lucrative private sector – was also another area of risk, said Huggins, but he said that people had been attracted by the ‘complexity of the project’ and the possibility of ‘changing how we do care’.

Huggins and Gunatillake provided the closing keynote address to the audience at the conference – which is organised annually by multiple health and care service partners in Scotland – and the National Digital Platform had been a topic of much interest for delegates over the course of the two days, which saw Cabinet Secretary for Health & Sport and Director General, Health & Social Care, Scottish Government, both emphasise the need to up the ‘pace and scale’ of digital transformation for the sector.

In terms of progress, the NES Digital Service is hoping to roll out one of its ‘products’ – the Respect form for managing the wishes of patients at the end of their lives – in the new year. Gunatillake said that the team had been working across the health service with all the various technology portals that the NDS will integrate with – including Clinical Portal (a service used by hospital clinicians at NHS Forth Valley, where it will be rolled out first) and Person Centred software used by care homes – as well as with clinical stakeholders who are helping to shape the process.

Dr Juliet Spiller, a palliative medicine consultant who works for Marie Curie, and who has has been instrumental in Scotland in terms of shaping the Respect process, gave a moving testimony about the potential for the NDS work to radically transform the way patients are cared for at their end of their lives.

She said: “I’ve been a consultant for 17 years and I’ve been involved in a huge amount of different aspects of trying to support, making sure that patients get the best possible care in end of life care situations and I can honestly say that actually watching a video of Alistair Hann presenting this to the new team, in terms of something that he was going to take forward and the way that he did that was one of the best moments in my career.

“I honestly can say that because I realise the completely transformative nature of what he was saying was possible and what he was saying he was going to do. And every time I hear somebody from the team talking about this and hearing how everybody gets what this is and how potentially transformative it is, it just reinforces that sense that this is genuinely one of the most important things for healthcare moving forward – not just for my area of healthcare but for every aspect of healthcare.”

Attending her first-ever digital health event, Dr Spiller said her principle concern – in a Q&A with Gunatillake – was around funding. She had been exposed to projects in the past where people had put a lot of effort in, only to see it abandoned because of budgetary pressures, adding: “That has been my constant anxiety around this.”

Gunatillake, whose varied background has seen him create a mobile mindfulness app for modern life, called Buddhify, said that the project’s goal is to provide a single common architecture which can unite the multiplicity of NHS and care digital services that exist at NHS board level in Scotland – both hospital and GP systems, that currently don’t interface with one another – and also with the care sector, which again depends on which software has been selected by each of the 32 local authorities in Scotland.

He said that this is one of the reasons that the work is “so hard” but also “so important” that they get it right. Gunitallake and Huggins presented a slide which outlind the enormity of the integration challenge and creating the ‘underpinning architecture’, pictured below, amid some background noise emphasised from some quarters during the day that the re-design of the Respect process should not be the core focus of the team.

However Gunitallike said that the approach was to ensure that the NDS provides the same experience for anyone who interacts with it. He said:”In the same way with that ‘under the hood stuff’, we’re using the same architectural components, we’re building our design libraries which will use the same UI (user interface) components and the same service design components: so, service patterns, interface patterns, design patterns will be consistent across the whole thing. This is the world we’re building from an experience perspective.”

He added: “Because when we started this work we talked about citizen-facing services, practitioner-facing services and administator-facing services; but actually I started to become quite uncomfortable with that terminology, the idea that even just by using those citizen facing, practitioner facing [terms], it makes it feel like different things. We’re not talking about that. We’re talking about one single thing that’s got different types of user and what that user experience is personalised and based on who you are.”

In Scotland, he said that the work that the NHS Digital team in Leeds had done will be iterated because they had done a lot on the citizen-facing side but less so with clinicians. “So, we’ll be interested to see what the differences are, what the gaps are,” he added. The NDS will also work with NHS 24 which is building out its NHS Inform service – Scotland’s national health information service – to ensure there is consistency across anything a citizen may be offered by the NHS. “It makes sense that we both design those libraries together and build out those libraries together,” he said.

By spring next year, the NDS will have increased its staff up to around the 50 level, filling mainly engineering and product roles, Huggins said, and the focus will very much be on developing the core componentry of the system so that it can interact, via a cloud-based system, with the substrates of data stores that exist in health and care in Scotland, as well as to ensure Respect is delivered and scaled up at a national level. The three driving ambitions of the NDS project in its entirety are to create a portal which provides clinical data at the point of care, with a common architecture and which hosts data at scale to drive research and quality improvements.

We need to increase the pace and scale of transformation in health and care, says Cabinet Secretary