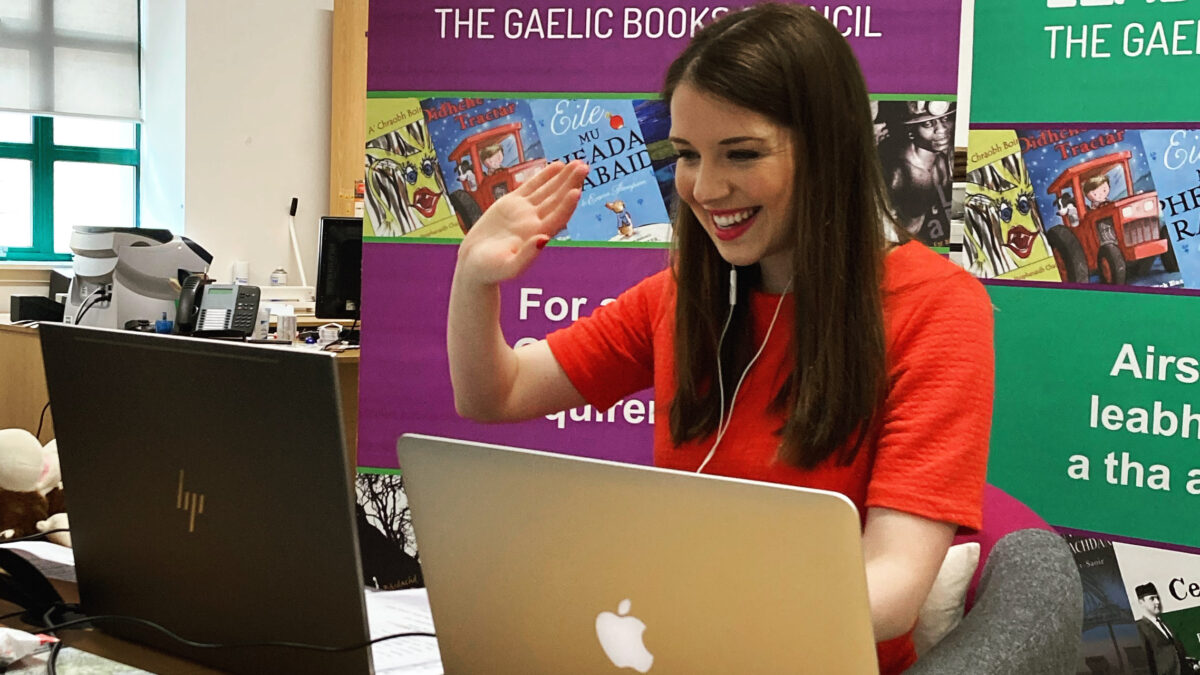 Learn with Linda: how Gaelic storytelling became an online hit during Covid

“I’m not really technically-minded,” says Linda Macleod – but this hasn’t stopped the rising TV star from delivering digital Gaelic reading sessions to thousands of kids during the pandemic.

The entertainer has been hosting Leugh is Seinn le Linda – Read and Sing with Linda – for young children with the Gaelic Books Council for five years, alongside her work with BBC Alba.

But when Covid struck 18 months ago, the “fun, hand-clapping, foot-stomping” storytelling sessions – which normally take place once a month in a cosy Glasgow bookshop – were cancelled.

This changed when e-Sgoil – the national digital platform for remote learning in schools – approached the Books Council with hopes of teaming up to deliver online Gaelic medium literacy classes to students across the country. A partnership with the Stornoway-based remote teaching facility was formed.

From her home in Glasgow, Macleod started delivering three 30-minute sessions a week via Microsoft Teams on the national digital platform Glow, which all pupils and teachers in Scotland can access.

They were a hit. From September to December 2020 – Linda’s Gaelic online sessions were viewed 4,278 times.

This is an almost eight-fold increase in reach compared to the same period in 2019, when 498 kids attended the Gaelic Books Council’s in-person sessions.

“Going online just sort of opened it up,” says Macleod. “The online sessions have been great through lockdown because we’ve been able to continue delivering them and the children have been able to actually have that as part of their curriculum. We’re very thankful that technology has aided us in that respect and that we’ve had the opportunity to do it.”

She adds: “We have done tours before – so we have taken the project to the islands, around the Highlands, to Edinburgh, and we’ve been around various schools and parent and toddler groups as well.

“But having the sessions online has been lovely to reach a wider audience on a more regular basis, and showcase the project to those who hadn’t heard of it before.”

BBC Alba soon took interest in the project, and the singer went on to present two series of Leugh le Linda (Read with Linda) on the channel.

Macleod, who is from North Uist in the Western Isles and has spoken Gaelic all her life, says going digital has allowed the Gaelic Books Council to overcome geographical barriers.

“If we were doing live sessions, we wouldn’t be able to go to those schools every week. There wouldn’t be enough hours in every day to reach the masses that we are over such a spread-out area,” she says.

Additionally, seeing the same faces each week has “reinforced their learning on a regular basis”.

Was the transition to digital challenging?

“I’m really not that great with technology. It’s never been my strong point. So it was a little daunting at first.

“But to be honest, it was very straightforward, even for the likes of myself to do. Obviously, at times you’re thinking to yourself – ‘I hope this is working’ – but we got there. Like everything else, you adapt to the situation, and you make the most of it.”

Despite the impressive increase in reach and engagement that has come from going online, she admits to missing the more “intimate” sessions at the Gaelic Bookshop in Partick.

“When I am with the children in-person and I can actually see them, I find it so much easier to interact with them,” she says.

“Sometimes the cameras are turned off in some schools – so it’s just a little bit easier when you’re actually with the children to gauge how they feel about the story and what parts they like, and then actually ask them questions.”

And on top of learning how to navigate a new online environment – the country was (and still is) navigating a pandemic.

Due to Covid restrictions which meant children were not permitted to sing in school for the majority of last year, Read and Sing with Linda became ‘Read and Play’, though they got away with rhymes and “rapping ever so slightly”.

But what she couldn’t do with singing, she made up for by dancing. “Even through the screen, I tend to get the kids moving.”

She adds: “I’m aware that with the stress that the kids have been quite tense through lockdown. So we do tend to promote just a bit of movement just to help them ease and stretch.”

Though the Gaelic Books Council are keen to return to in-person sessions “when it is safe to do so”, online classes will continue for the foreseeable future.

Does Macleod see a future for digital lessons post-pandemic?

“I’m pretty sure online sessions like this will play quite a big part in the curriculum going forward, especially with regards to opening up more opportunities for rural and remote schools.”

She may not consider herself technically-minded, but having signed up to deliver another eight-week block of sessions with e-Sgoil – she could be converted soon.

Fears ‘valuable staff’ could be lost thanks to Scottish education reform