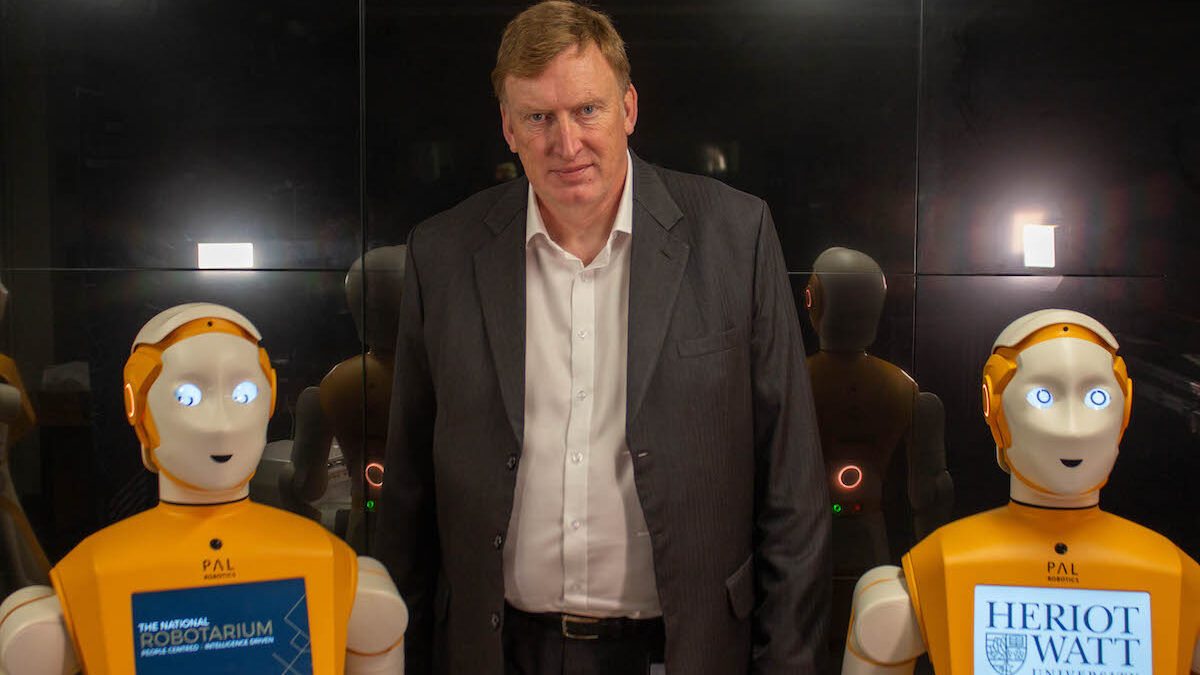 Scotland’s national centre for robotics and artificial intelligence (AI) has appointed its first chief executive – a move that is being called a “major milestone” for the UK’s tech economy.

Stewart Miller, former chief technology officer of the UK Government’s innovation agency, Innovate UK, will take up the role at the National Robotarium in Edinburgh.

As a “distinguished” business leader with a wealth of experience in technology development in the aerospace sector, Glasgow-born Miller is “well-suited” to lead this initiative.

Now based in East Lothian, he has previously worked in senior roles at major firms including Leonardo and BAE Systems.

Miller plans to build the National Robotarium into a “globally recognised centre of excellence” for robotics and AI, working directly with businesses to accelerate innovation and drive value from world class research.

He will also aim to create future talent through a flexible skills programme and support entrepreneurs capable of developing exciting new businesses to fuel the economy.

The National Robotarium, a partnership between Heriot-Watt University and the University of Edinburgh, is one of five innovation hubs supported by the £1.3 billion Edinburgh and South East Scotland City Region Deal – a 15 year investment programme funded by both governments and regional partners.

Kate Forbes, finance and economy secretary, said: “I offer my warmest congratulations to Stewart Miller on being appointed to this exciting role. His extensive experience of both the public and private sectors will be a real asset to the National Robotarium, and have a direct impact on our world-leading manufacturing industries.

“This is a crucial time for business, trade and investment in Scotland. City Region and Growth Deals have a key role to play in our economic recovery from the pandemic as we work towards a fairer and more inclusive Scotland. Our investment in the National Robotarium is part of our £300 million commitment to the Edinburgh and South East Scotland City Region Deal, which will help to build a future economy that benefits everyone.”

Iain Stewart, UK Government minister, said: “Congratulations to Stewart Miller on his appointment to head up the exciting work at the National Robotarium. The UK is investing £21 million for cutting-edge facilities at the Robotarium as part of the Edinburgh and South East Scotland City Region Deal, bringing jobs, opportunities and businesses to the region and helping to make it a global data capital. We are investing more than £1.5 billion in region deals across Scotland, and helping communities to build back better after the pandemic.”

Miller’s appointment comes as the UK Government’s Innovation Strategy identifies robotics and AI as two critical “technologies of the future” which will help to transform society and fuel economic growth over the next decade.

The market for Robotics and Autonomous Systems alone is forecast to reach almost £3.5 billion by 2030. The development of the National Robotarium will help to grow the UK’s existing advantages in this field and position Scotland as a “world-leading” centre for innovation and entrepreneurship in line with the Scottish Government’s National Performance Framework.

Professor Richard A Williams, principal and vice-chancellor of Heriot-Watt University, said: “The appointment of an outstanding chief executive underpins the ambition for the National Robotarium to accelerate digital and AI driven skills to serve society in a positive way and to create new businesses and jobs for Scotland and address global opportunities. Stewart’s appointment is a significant moment as we drive forward our collective research and education strengths to lead innovation in this area and to ensure, working with partners, we catalyse the talent pipeline needed to serve this fast-growing sector. A massive opportunity for Scotland.”

Miller said: “It’s a huge honour to take up this role, helping set the direction of the National Robotarium which has enormous potential to transform lives. The opportunity is to bring together the needs of businesses and society and the emerging technology solutions from research at the UKs leading universities.

“As someone who has been working in technology for 40 years, leading a facility that is tackling some of the world’s biggest challenges using Robotics and AI is incredibly exciting. It is clear to me that this role presents an extraordinary opportunity to build productive global partnerships, creating economic, environmental and societal benefits. I look forward to working with research teams, students, and partners across industries and governments as we grow the National Robotarium’s influence and impact.”