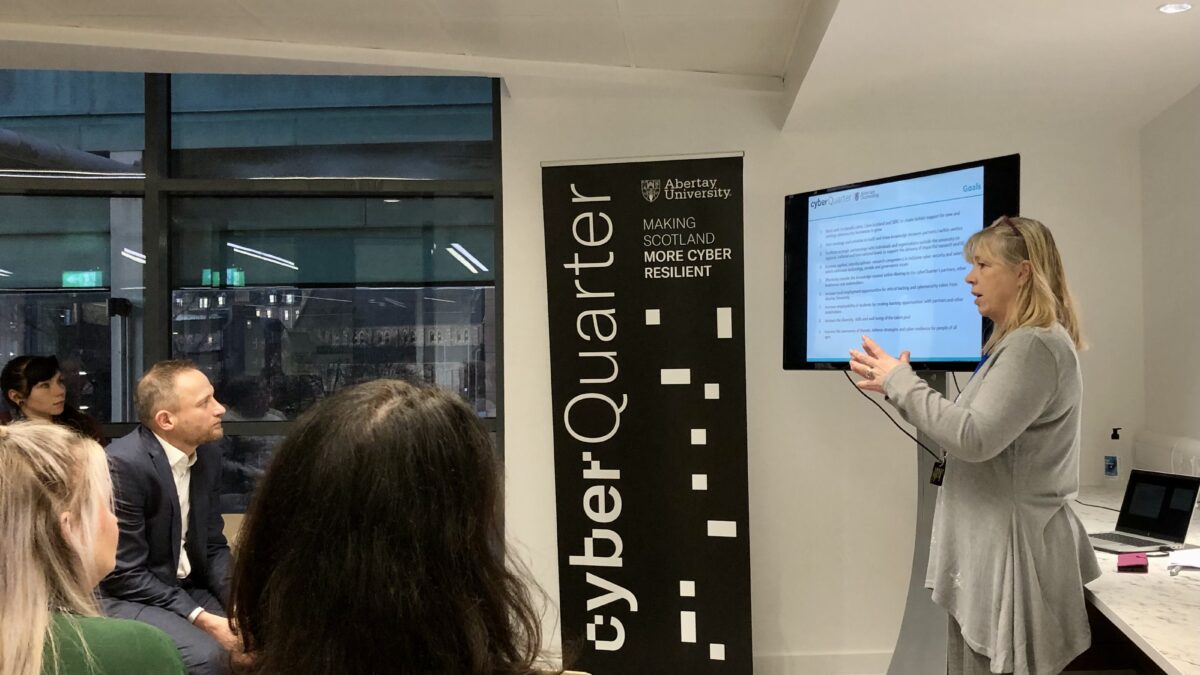 Professor Lynne Coventry, director of cyberQuarter at Abertay University, speaking at one of the many cyber events hosted at the Annie Lamont building. Photograph supplied.
Cyber

Global cyberattacks have risen dramatically in recent years as online threats have evolved from email scams and malware to sophisticated and targeted ransomware.

According to cybersecurity firm NCC Group ransomware attacks almost doubled in 2021, rising 92.7 per cent on the previous year. For serious and organised crime gangs, it is a growing and increasingly profitable business that shows no signs of slowing down.

Lindy Cameron, chief executive of the National Cyber Security Centre (NCSC), recently identified ransomware as the primary threat to Britain’s national security, and warned that these types of online threats are ‘evolving’ as  gangs increasingly offer them to other criminal entities ‘as a service’.

It is little surprise that there has been a commensurate rise in spending on cybersecurity products and services. In response to the threat, businesses of all shapes and sizes are dedicating more time and resources on protecting themselves and their assets – in particular their data – from cyber harm.

Universities are vital to that cause. Many of the most innovative cyber technologies start life as an academic thesis or research paper, and students completing undergraduate and postgraduate-level cybersecurity courses are in record demand.

Abertay University in Dundee is one such institution carving niche for itself in the cyber world. In 2020, it was named as Scotland’s only ‘gold standard’ Academic Centre of Excellence in Cyber Security Education (ACEs-CSE) by the NCSC, in recognition of the high quality of its degree programmes and also its plans for cyberQuarter, a dedicated cyber facility funded jointly by the UK and Scottish Governments – and the university itself – through the Tay Cities Region Deal.

Two years hence and the £18m hub located at the university’s repurposed Annie Lamont building is now officially open and functioning as a base for cyber students and startups, as well as a working ‘security operations centre’ (SOC) for NHS National Services Scotland. Soon, it will also house one of Scotland’s new ‘tech scalers’, a nationwide education and mentorship programme for ambitious tech companies and founders – an initiative developed by Mark Logan, the former Skyscanner executive.

For Cheryl Torano, the business development manager for cyberQuarter, it’s not just a question of banging the drum for cyber in Dundee, although that is an important part of her job, but also crucially to try and retain some of the cyber talent that is coming out of the university, particularly from the well-regarded ‘ethical hacking’ degree course, as many are too often tempted to leave the city for highly paid jobs in Edinburgh or Glasgow, further afield in the UK or even Silicon Valley.

“We’re aiming to make Dundee a digital city, and that goes hand-in-hand with cybersecurity, as you can’t have tech without cyber,” she says. “For us, retaining the talent we’ve got coming through is key to that, as we need to be developing some of those companies here and giving our students opportunities here.”

“The cyberQuarter is going to give those students so many opportunities to get work experience with the likes of a working SOC and to develop their research interests as well,” she adds.

On that front, professor Lynne Coventry, who has been appointed as director of cyberQuarter, will be key to ensuring the university is able to attract the big cyber research grants from across the UK. She was instrumental in growing the research base of Northumbria University, where she worked prior to her appointment in August last year, which was awarded Academic Centre of Excellence in Cyber Security Research status by the NCSC. It is for that reason that Abertay wanted to entice her to the role, so it could enhance its own research base, supporting the teaching excellence it has already achieved.

“I guess I’ve been brought in because I’ve got an interdisciplinary background,” she says. “So I’m wanting to bring that to the role, and to look at issues around governance of cybersecurity and businesses, the people side and behaviours. And then the tech, what we need to do for the tech on the innovation side.”

She adds: “So really, with the help of Cheryl bringing in the businesses, it’s to get those businesses thinking about their future needs and buying into doing some research with us. That applied research focus and making companies more visible to the students, increasing placement and internship opportunities, will be key to the success of the cyberQuarter. In two or three years I’d like to see all of our students to be able to get a placement opportunity with the companies that we’re involved with. And for that to become our USP as a degree as well.”

Professor Coventry sees the potential for landing big research funding opportunities from the UK and Scottish Governments and via UK Research and Innovation (UKRI) ‘knowledge transfer partnerships’, which are designed to connect businesses to academic research that can help them innovate and grow.

She is committed to using the building to make those connections “authentically and strategically”, as she wants to avoid the scenario which sometimes leads to companies being overwhelmed by universities contacting them with research proposals that may or may not benefit them.

Whilst quiet on the day of my visit, the Annie Lamont building has clearly been sympathetically renovated with the modern startup in mind. On the ground floor the old student union has been transformed into a vibrant cafe and meeting space and the four floors above are all largely open plan with desk space, kitchen facilities and meeting rooms.

With the advent of remote working post-pandemic, students and young companies are not necessarily located in the building every day but it is being used for meetings and events, such as workshops and seminars. The NHS’s security operations centre also is enticing students to come in and get a feel for working on the frontline of cyber defence in Scotland, and the Scotland 5G Centre has announced it will operate its Dundee hub from the building.

More widely, the building really puts Dundee on the map for cybersecurity and technology. It has already cultivated a reputation for gaming, with the likes of Grand Theft Auto and Minecraft for consoles having its roots in the city – and now its cyber credentials are being supported at a national level by the likes of the Scottish Business Resilience Centre (SBRC) and ScotlandIS, among 12 founding partners.

The days of ‘jute, jam and journalism’ feels like a distant memory as the city’s £1bn waterfront development has given rise to the iconic V&A Dundee, a revamped Slessor Gardens and the proposed Eden Project biosphere, which will bring some natural vitality to the city centre.

A brand new e-Sports arena with 3,500-4,000 seats will also provide a huge gaming and concert venue for the city when it takes shape, and there are discussions about adding more office space to the transformed waterfront. The city, once derided for its high teenage pregnancy rate and appalling drugs misuse statistics, is going through something of a renaissance – and tech is clearly at the forefront of a bold and more confident future.

The question is whether Dundee can boost its appeal – and compete at a global level – so that more tech companies choose to base themselves there. That will be down indeed to retaining some of the cyber talent coming out of Abertay, and equipping students with some entrepreneurial skills as part of their course, or encouraging collaboration with business-minded fellow students, which was one of the recommendations in Mark Logan’s ecosystem report for the Scottish tech sector.

But it will also be about spending time and energy on appealing to students and startups of other cities in Scotland, the UK and overseas to come and work there. If cyberQuarter can project its influence successfully at those levels, then it has every chance of playing an integral part in a new chapter of Dundee’s storied past.

Cyber security: Kicking 2023 off on the offensive