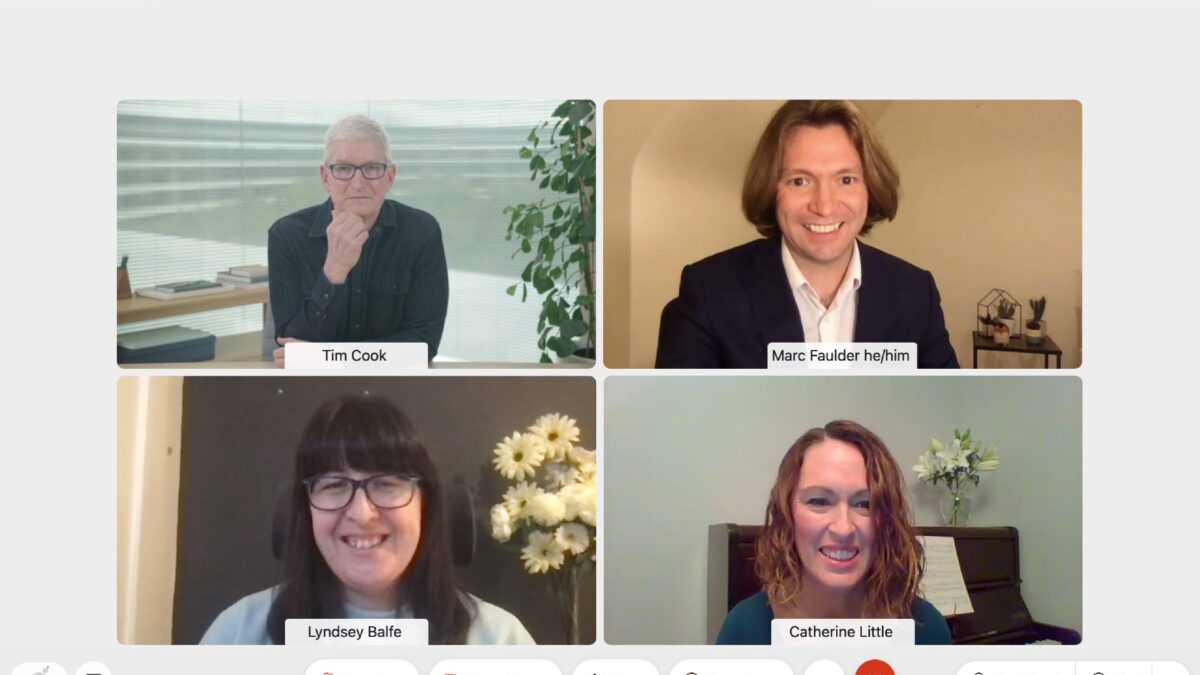 Borders teacher gets some ‘face time’ with Apple’s Tim Cook

A Borders school teacher had some ‘face time’ in a virtual meeting with Apple chief executive Tim Cook – to promote coding skills for kids.

Catherine Little, who teaches at Kingsland Primary School in Peebles, met the tech giant boss with fellow teachers from the UK and Ireland, as part of efforts to boost a Europe-wide computing science drive.

Little said: “It was amazing to be able to share the importance of coding and the work that we are doing around it with such a high-profile Apple representative. Our young people are really embracing coding and it’s been great to see them getting involved with Europe Code Week.

“Coding helps children with things like communication, creativity, maths, writing and confidence, and through Inspire Learning we’ve been able to make it really accessible for the pupils.”

Last week, nearly 2,000 young people in the Scottish Borders displayed their tech skills during a two week-long coding festival – a campaign run by volunteers across the continent to promote the impact and potential of coding in education.

As part of it, the Scottish Borders Council’s ‘inspire learning’ team hosted a live lesson using iPads and Apple TV technology, involving up to 90 P4-P6 classes across primary schools in the area.

The session looked at creating and designing apps with a focus on accessibility for all.

Since then, two secondary schools in the Scottish Borders have been recognised as ‘centres of innovation, leadership, and educational excellence’ by Apple.

Kelso and Selkirk High Schools have been awarded for the way they are using technology to teach young people through the council’s ‘inspire learning’ programme.

The £16 million initiative, developed in partnership with Apple, aims to create a “world-class” digital environment in Borders schools whilst getting iPads into the hands of all P5-S6 pupils.

She said: “They [the schools] have been given this prestigious recognition due the hard work of the staff and pupils at both schools and their willingness to embrace new ways of working using technology.

“This has, of course, been delivered through our award-winning Inspire Learning programme which has transformed the way we teach and learn in the Scottish Borders.

“Inspire has become embedded at the heart of what learning and teaching looks like in the Borders. Its ambitions were clear and direct: to raise attainment, support equity and inclusion, and help prepare pupils for a digital future.”

Despite a national focus on digital skills and education, secondary schools in Scotland are finding it increasingly difficult to deliver computing science.

The latest official data shows the number of pupils studying the subject has declined significantly over the past decade, while the gender gap has grown. In 2001 there were 28,393 pupils who sat computing science across all levels, and 9,825 girls. As of 2020 there were 9,873 pupils who took the subject and just 1,895 girls.

Meanwhile, Scottish Government statistics reveal that between 2008 and 2020, the number of computing science teachers in Scottish schools fell from 766 to 595.

Exams will not be scrapped, Scottish Government says

CodeClan set for expansion in Glasgow