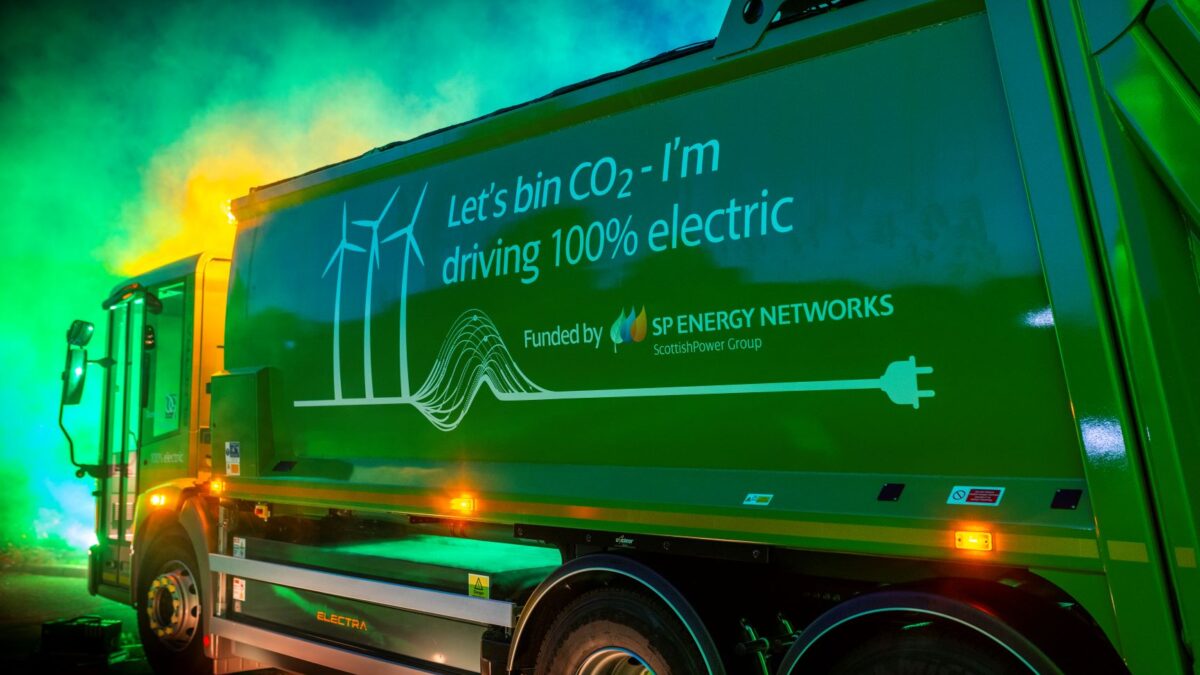 “We will lead a green travel revolution,” Nicola Sturgeon promised while unveiling her programme for government earlier this month.

It’s a bold statement – but one that’s been delivered alongside a series of “world-leading” climate change targets which aim to decarbonise the public transport network.

With the Cop26 climate change summit in Glasgow next month, ministers are working towards their ambition to eliminate the need for any new petrol or diesel vehicles in public sector fleets by 2030, phase out the sale of new petrol and diesel cars by the same year, and decarbonise Scotland’s railways by 2035.

The Scottish Government has also committed to investing £120m over the next five years to support the rollout of zero emission buses, and has launched the first £50m phase of a Scottish Zero Emission Bus Challenge Fund.

Leading by example – the First Minister now undertakes her own government duties in a plug-in hybrid vehicle provided by Police Scotland.

The rate of transformation required through decarbonisation is unprecedented, and local authorities – as some of the largest fleet operators in Scotland – are beginning to shift gear.

The eco-friendly bin lorries are currently serving communities in both Dumfries and Stranraer, the two largest towns in the council area.

Using the vehicles to collect waste is part of the drive to reduce carbon emissions and improve air quality.

In 2019, Dumfries and Galloway became one of the first councils in Scotland to pass a Climate Emergency Declaration, agreeing to reduce carbon emissions in the region to net zero by 2025.

This legislative move was made after SNP Councillor Dougie Campbell put forward a motion to full council to declare a climate emergency, alongside a “radical and comprehensive” 12-point action plan outlining how net zero targets will be met.

Between now and 2030, our fleet will be completely electric, possibly high hydrogen-powered – we’ll see how that technology goes…

With transport being the largest contributor to harmful climate emissions in Scotland – emitting a total of 13.9 million tonnes of carbon dioxide equivalent in 2019 – “greening” transportation in the region is one of the council’s main priorities.

Campbell says: “Whilst we’ve embarked on this plan to electrify our own fleet, what we’re hoping is that it encourages other businesses, other organisations and individuals to convert to electric and on top of that, what we’re also doing, is we’re putting in place electric vehicle charging points across the region.”

The project has been “gaining a lot of interest on social media” among Dumfries and Galloway residents and has “captured people’s attention”, says Campbell.

And though there are plenty of benefits – the maintenance costs are low, noise pollution is reduced, there are zero carbon dioxide emissions, running costs are less than diesel – the council is not making any rash decisions.

Understandably so. The price of electric vehicles is indeed staggering. A regular bin lorry operated
in Dumfries and Galloway costs just £160,000 plus VAT – you could buy six of them for the price of one high-tech green machine. However, the cost is expected to come down in time.

“So it’s been done in a phased basis, but the plan is, between now and 2030, our fleet will be completely electric, possibly high hydrogen-powered – we’ll see how that technology goes… So, it’s not a case of buying an electric bus or electric bin lorry to grab headlines, it’s part of a phased process.”

The council is monitoring the performance of the electric bin lorries to provide evidence for the time when elected members will need to decide on whether to replace the existing diesel fleet at the end of its life with electric vehicles.

It is also still to be discovered if the existing range for the vehicle in rural locations in the region is “practical”.

The vehicles should save about 680 tonnes of carbon dioxide emissions annually.

According to Keith Anderson, chief executive of ScottishPower, to have any chance of meeting net zero by 2045 – and 2050 for the UK as a whole – Scotland needs to change how it moves people and goods around the country and emerging climate tech solutions will prove paramount.

He says: “Ditching petrol and diesel vehicles is a huge part of the energy transition, but this has to be done in a way that works for people and businesses in every part of the country and leaves no-one behind.

“That means all-electric refuse vehicles may be suitable for some areas, but not for others – and that’s the reality of a cleaner, greener future. Electrification will only go so far and there will be some forms of transport, and some industries, that will need to consider other technologies and innovations.

“That hybrid approach – using different technologies and different solutions – is what will help us get over the line on the journey to net zero.”

ScottishPower is leading the way, already working on various projects based around the use of green hydrogen as a zero-emission fuel, with the hydrogen being produced using renewable energy that could come from their windfarms and energy parks or be developed on site specifically for that purpose.

Anderson adds: “These are really exciting innovations that will give us more tools in the box, enabling the country to decarbonise at a faster rate and in a fairer way.

“What we’re looking at in the coming decades is nothing short of a green energy revolution: our cities will change, our homes, the quality of our air, our offices and businesses – and the really exciting bit is that all the technology is there now, but we’ll also see new innovations in the coming 10 and 20 years that we haven’t even thought about yet.”

The Scottish Government is also tapping into this innovation – supporting the production of Scotland’s first hydrogen-powered train together with Scottish Enterprise and the Hydrogen Accelerator.

It is hoped the development – which is to be demonstrated at Cop26 – will boost the Scottish rail supply chain and promote green technology.

SP Energy Networks’ £20m Green Economy Fund was established in 2018 to support the Scottish Government’s energy strategy and the drive to become net zero by 2045.

The fund is designed to support ambitious and innovative projects that will help meet climate change targets, boost economic growth, improve air quality across the country and deliver a better future, quicker for communities.