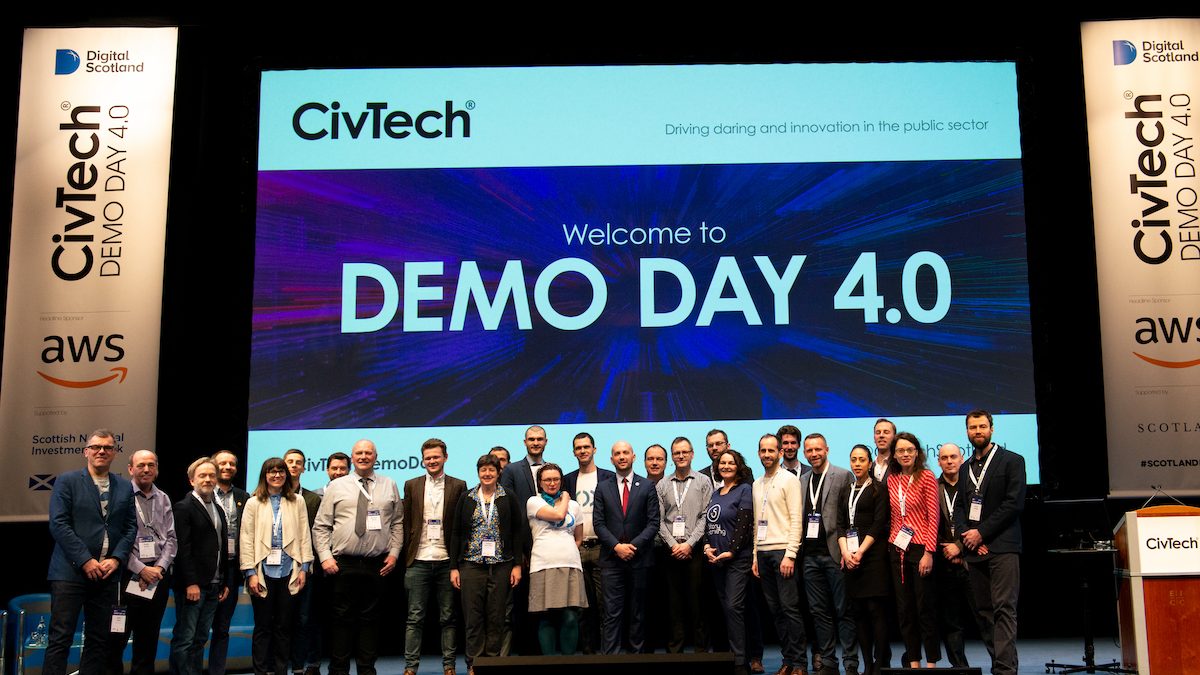 CivTech – the Scottish Government’s flagship innovation and technology accelerator scheme for start-up companies – is poised to become a significant addition to the public sector response to climate change.

The government-backed business mentorship and support programme, which held its fourth annual ‘demo day’ on Wednesday at the Edinburgh International Conference Centre (EICC) – has indicated a shift in policy focus as the public sector considers new ways to harness entrepreneurial talent to help the country realise ‘net zero’ carbon aspirations by 2045.

More than 450 delegates gathered for CivTech 4.0 Demo Day at the EICC to watch fourteen companies respond to public sector challenges, with almost half of this year’s cohort explicitly focused on ameliorating national and local government responses to environmental challenges.

Colin Cook, Director Digital, The Scottish Government, reflected on the urgent need for public services to try and find ways to bring solutions to market which can help not only Scotland but global governments adopt climate change-focused innovations and technologies.

Addressing a packed auditorium at the full-day event, which featured its first ‘Net Zero Zone’, Cook said: “We have the opportunity to address the biggest challenges of our time and later this year in Glasgow the Scottish Government and Scotland hosts COP 26.

“And what we’re going to do – and we’re going to put all our energies and passion into doing – is to leverage what we see today in the Net Zero Zone, leverage the six companies that are already trying to tackle climate change, build on that and focus the future of CivTech on tackling the climate emergency.”

He said: “With your support in that area I think we can do something really special and use COP 26 to send a powerful message, not only about Scotland’s determination to address the climate emergency but also about the level of innovation in digital and data that we have. It’s a great challenge and it’s a great future for CivTech. ”

Among the challenge sponsors at the conference were Glasgow City Council, which asked technology providers, ‘How can we help citizens reduce their carbon footprint and make the city more resilient to the impacts of climate change?’ The council worked with Reshape Technology, which devised an app to help people at an individual level measure their own impact on the environment, through their everyday behaviours. The idea behind the tech is that everyone with a mobile phone can download a ‘fitness app for the planet’ and view a dashboard of their ‘carbon stats’, with access to a series of features which even ‘gamifies’ the experience.

Cook said that COP 26 in Glasgow in November – where the world’s eyes will be on Scotland and the UK as hosts of the global UN climate summit – could be a fantasic platform for Scotland to showcase some of the climate change-focused applications being developed through the CivTech programme.

He added: “CivTech is designed to meet the major public service challenges of its day and there is no greater public service challenge and no greater societal challenge than climate change. So, it’s up to us to use the CivTech process to get the energies of entrepreneurs, academics, small business people and get them working with government to develop solutions. And that’s what we intend to do. I think with COP 26 coming up, quite often with good ideas like these, you need a platform to launch internationally. And we’ve got a fantastic platform coming up, so there’s a lot of potential in that.”

Forestry Land & Scotland chose no fewer than five companies when it issued its own challenge, ‘How might we use technology to make better use of Scotland’s valuable but limited supply of high quality tree seed?’ The organisation selected Elsoms Seeds, Silvibio, Cumbria Tree Growers, Forest Research and Forestart, all of whom featured in a busy Net Zero Zone, where Fergus Ewing, Cabinet Secretary for Rural Economy and Tourism, spoke during the lunchtime break, adding: “This event is an opportunity to understand what has been released by the efforts of CivTech in the forestry field. Already I’ve grasped that what is happening here will transform forestry in just a few years’ time.”

He added: “The climate challenge is with us and there is an appetite for action, and not words. And we are delivering action not words in Scotland, and we have been for some time. We have led on renewables, on peatland restoration, on forestry and restoration of open-cast old coal sites.” Ewing said these ‘massive eye-sores’ are now set to become sites for new forestry, which he said has been a ‘tremendous achievement’, and also paying tribute to the digital innovations that have been pioneered through CivTech.

In economic terms, the impact of CivTech has more than doubled year-on-year, with new figures shared at the conference indicating that since inception the programme has created 141 full-time equivalent jobs, with £11.6m in contracts secured by challenge companies and £6.1m in investment and grants. The new Scottish National Investment Bank (SNIB) was also featured at the event, with a keynote from Benny Higgins, the former Tesco Bank chief executive who has advised First Minister Nicola Sturgeon on its creation. Higgins, who talked about its ‘mission-oriented finance’ approach – where social and environmental goals are part of the investment approach – said that the £2bn it will have its disposal will enable Scotland to have the ‘firepower’ it needs to scale its economy and meet some of those challenges.

Summing up the day afterwards, Cook said he wants CivTech to take that direction in future, and said the programme – acknowledged by apolitical founder Lisa Witter as a ‘global leader’ earlier in the day – is a real opportunity to put Scotland on the map, solving not just public sector challenges but scaling up to meet demand in a growing international ‘govtech’ market. He said also that the companies that had responded to the Forestry & Land Scotland challenge were evidence that CivTech can also be a ‘successful way of working beyond the narrow definition of the tech industry’.

He said: “There’s been a real energy here today and I think we’ve got some products that have the potential to scale, the potential to go intenationally, which is what we’re looking for. Because ultimately we’re trying to put Scotland’s economy in a better position. And actually I was really impressed with some of the ideas to improve the yields from seeds. If I was an investor looking at Scotland, I think we’ve served up some really interesting ideas today.”

“The programme provides ways of exploring responses to the most difficult issues we face as a nation, including how we respond to the climate crisis and improve wellbeing for all our citizens.

“CivTech Demo Day is a culmination of months of hard work from our innovative public service challenge sponsors and the companies and entrepreneurs who responded. It is also a platform for companies to showcase their work and encourage other public organisations to consider how they can use technology to solve problems.”

For full background on the challenges, sponsors and companies visit: https://civtech.futurescot.com/civtechdemoday/473229

CivTech 5.0 to launch in July