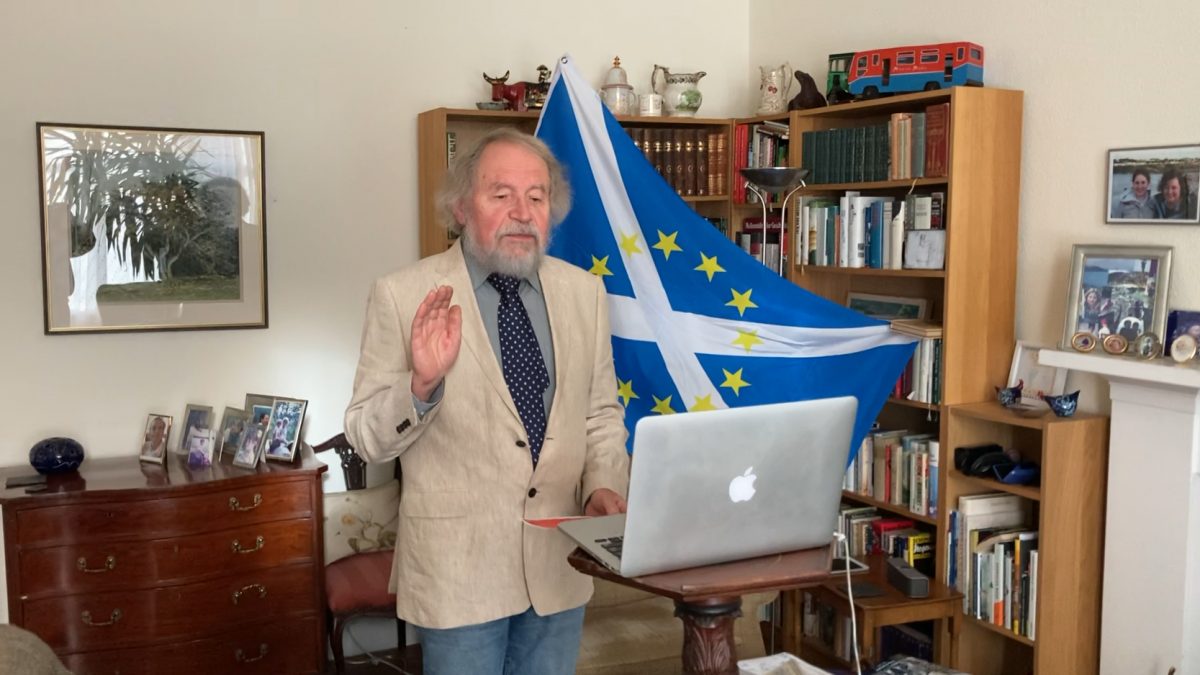 Argyll and Bute council turned to virtual meeting platform Zoom as it sought to address the backlog caused by the Covid-19 pandemic.

The council started up its online ceremonies back in October to offer citizens an alternative to travelling to a local register office, where restrictions had led to scaled-down events.

Rolf Krezdorn, originally from Fribourg in Germany, was among the first to take part in the remote ceremonies after applying for British citizenship.

The 70-year-old, who has lived in Helensburgh for 20 years, said: “It was a good thing to do under the circumstances, definitely. And I really appreciated how the council arranged for it.

“Obviously it wasn’t the same environment, and you can’t invite people, and it wasn’t face-to-face.

“But technically it was very smooth and there were no problems.”

He was informed of the process for the event, gave his citizenship affirmation and listened to the national anthem in the surrounds of his own home, where he displayed the EU and Scottish flags.

He said: “I do feel Scottish – I have spent so much time in Scotland now and my children have grown up here, gone to school or university here. My wife is originally Swiss but also half-Scottish, so the intention had always been to apply.”

Citizenship ceremonies are held around the UK in local register offices after foreign-born residents have successfully applied for British citizenship, via the Home Office.

After the pandemic hit in March last year, the process of issuing certificates and officiating local ceremonies – usually overseen by council registrars with the involvement of a Queen’s representative such as a Lord Lieutenant – was severely curtailed.

For Argyll and Bute council, which carried out 26 citizenship ceremonies in 2019, they had to find a solution to address a growing backlog of cases.

Julie McLellan, Service Point Supervisor/Registrar, District of Campbeltown, Argyll and Bute Council, said: “It was a bit different, but you still felt the joy that they were going through the ceremonies. In Rolf’s case you could tell he was very proud as he had his flags in the background.

“These online ceremonies have been a lot quicker as you don’t have all the hospitality, the teas, coffees and sandwiches – and you also don’t have the presence of the Lord Lieutenant, who is usually present on behalf of the Queen.

“In this case there were only two of us in the office, with an assistant the other side of the room working the music. It has taken away from the citizen’s experience, there’s no doubt about that, and having such an enjoyable day with the hospitality and ceremonial feeling but this has been a good way to provide a service.”

The council has also run in-person events, but they have been limited to just the citizen and the council registrar, with no guests permitted because of lockdown restrictions.

McLellan credits her colleague, Robert Miller, the council’s customer engagement and transformation manager, with getting the digital ceremonies off the ground.

She said the council had to purchase a tablet to run the ceremonies as Zoom was not allowed on the council’s network or wifi.

However, the council was in the process of moving to Microsoft Teams, like much of the public sector in Scotland.