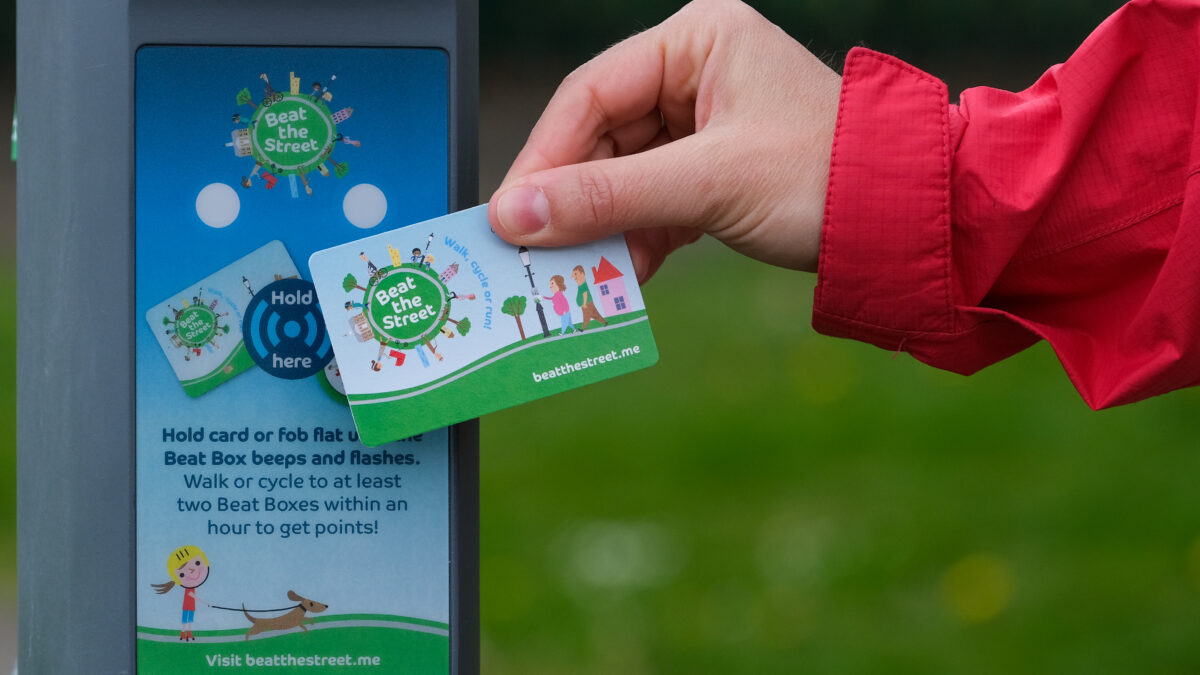 Can Renfrewshire ‘beat the street’ in physical activity game?

A popular physical activity challenge unlocked by sensors that has taken Scotland by storm will launch in Renfrewshire this autumn.

Beat the Street is a real-life interactive game that aims to get whole communities moving together and has been played by more than 1.4 million people in more than 100 locations across the UK and beyond.

In Scotland, Beat the Street has already successfully been played in locations such as Glasgow, Falkirk, East Renfrewshire and South Lanarkshire, and the Renfrewshire game will take place from Wednesday 15 September to Wednesday 27 October across the areas of Bridge of Weir, Elderslie, Houston, Howwood, Kilbarchan, Linwood, Johnstone and Lochwinnoch.

Prior to the game, residents will see special sensors called Beat Boxes appearing on lampposts around these areas which players will hover their card or fob over to start their journey. They can then walk, cycle or wheel to the next one within an hour to score 10 points.

To play, primary schools will be provided with fobs and maps, but the game is free and open to all, so the wider community is invited to collect a free card from a distribution point listed here.

Players can join a school team, a workplace or a community group and the further that participants walk, cycle or wheel, the more points they will win for their team.

To mark the charity’s 40th anniversary year, Beat the Street participants can also help one of the Provost’s chosen charities MND Scotland earn a cash donation of up to £500 based on the total number of miles travelled.

Councillor Cathy McEwan, convener of Renfrewshire Council’s infrastructure, land and environment policy board, said: “Beat the Street is a fantastic initiative to get children, families and our communities active. We are incredibly excited to bring it to Renfrewshire and we can’t wait to see how far everyone can walk, run, cycle, and scoot during the challenge.

“We hope that as many local residents as possible will take part earning points and prizes for themselves, their teams and MND Scotland while getting active and spending time outdoors.

“The game is designed to encourage active travel wherever possible so get the steps in, get in the saddle or any other method that means leaving the car at home.

“Anyone living, working or studying in the area can get involved – it’s completely free to play and is an excellent opportunity to go outdoors, spend time with your friends and family and get moving.”

Beat the Street Renfrewshire has been commissioned by Renfrewshire Council in partnership with Renfrewshire Leisure and is funded by the Scottish Government’s ‘smarter choices, smarter places’ programme, administered by Paths for All. It is being delivered by Intelligent Health.

The game was created by Dr William Bird in a bid to tackle the UK’s low levels of activity, to help people incorporate healthy habits into their daily lives, as well also improving air pollution, increasing active travel and reducing congestion.

Beat the Street has been updated to ensure that it is Covid-19 safe and there is no need to touch any of the sensors or Beat Boxes – all players need to do is hover their card or fob near the sensor and it will register the points.

Affordable homes in Scotland to be digitally-enabled