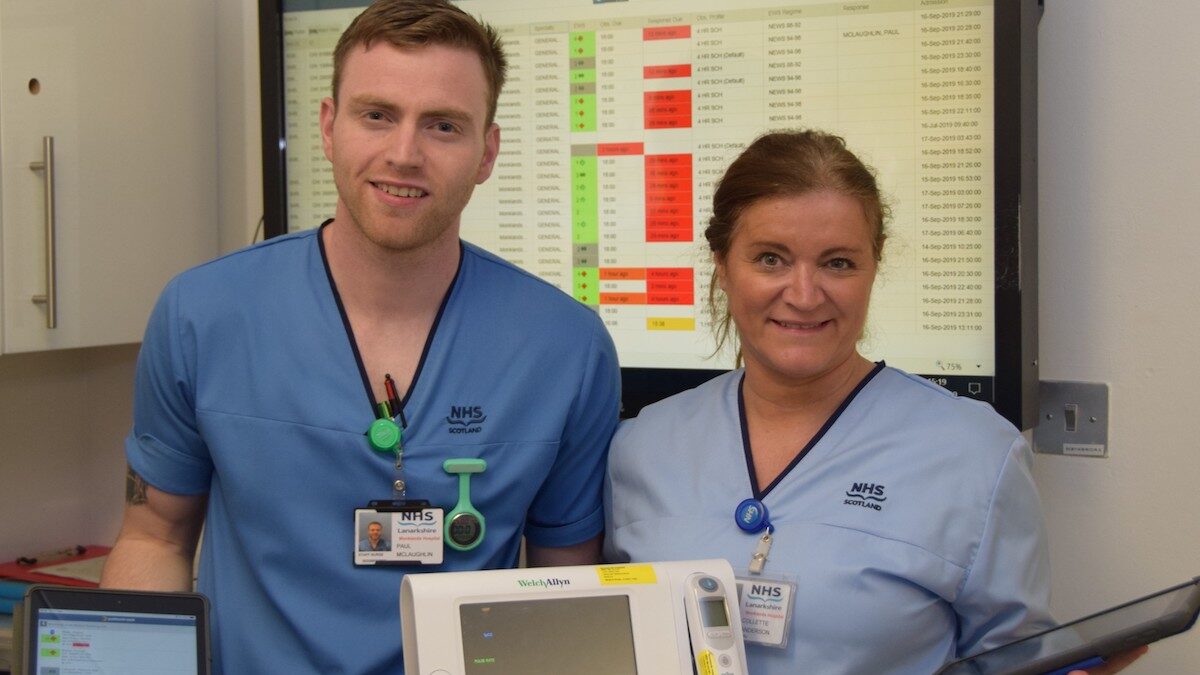 A digital system that automatically alerts clinical staff when patients are becoming unwell has been successfully tested as part of plans for a new hospital in Lanarkshire.

The system, which works in conjunction with Hillrom’s Welch Allyn vital signs monitors, replaced a paper-based system with Monklands one of the first hospitals in Scotland to use the innovative technology.

The trial was spearheaded by the Monklands Replacement Project (MRP) as part of its exciting ambition to make the new University Hospital Monklands Scotland’s first digital hospital when it opens around 2028.

MRP redesign lead Donna McHenry, who led the pilot study, said: “Patient observations should be conducted every four hours for the majority of patients, but achieving the desired frequency is challenging.

“Compliance with vital signs monitoring and recording has historically been inconsistent. With busy, noisy wards and healthcare professionals working to the limit in terms of capacity, tasks such as data recording can sometimes be pushed down the priority list.

“So the pilot study was carried out in two medical wards and two surgical wards at UHM to see whether a standardised electronic recording system could improve compliance and help deliver safer care. It allows healthcare staff at the bedside to record patients’ vital signs on iPads instead of using paper charts.

“The system records key factors including pulse, respiratory rate, blood pressure, temperature, level of consciousness and oxygen saturation as well as the frequency of observations and whether the frequency is correct in the context of the ‘early warning’ score system and clinical observation policy that we use.”

David Watson, senior advanced practitioner at UHM, helped Donna analyse the success of the pilot. He said it led to a notable improvement in electronic compliance for a complete set of observations using the NEWS (National Early Warning Score) system, a tool that calculates an overall score from vital signs that are key to identifying, escalating and prioritising patient deterioration.

David explained: “Pre-pilot recording of vital signs was 31 per cent, but this rose to 100 per cent for the four trial wards during the pilot, with 56,000 electronic observations in total.

“The NEWS frequency reliability – showing observations completed on time – was also 31 per cent using the old paper system compared to 74 per cent for the wards using Patientrack.

“We surveyed staff and the majority agreed that ease of use was a strength of the system. The survey also revealed that staff perceived an improvement in patient safety due to the availability of timely and accurate vital signs, which would suggest an increased likelihood of earlier identification of those patients who are deteriorating.”

The system’s greatest strength is the ability to have hospital-wide visibility of all patients and their NEWS score. This is particularly useful during out-of-hours, when staffing numbers are reduced, and also for critical care outreach teams to ensure they are aware of potential deteriorating patients who may need their support.

University Hospital Monklands chief of nursing services Karen Goudie, who’s a member of the MRP team, said: “Our goal is for the new University Hospital Monklands to be Scotland’s first digital hospital, using systems that allow a more agile response to the challenges the NHS faces. That’s why the current Monklandssite is leading the way in taking forward technological advances, such as Patientrack.”

COVID-19 demonstrates the vital role of data in healthcare