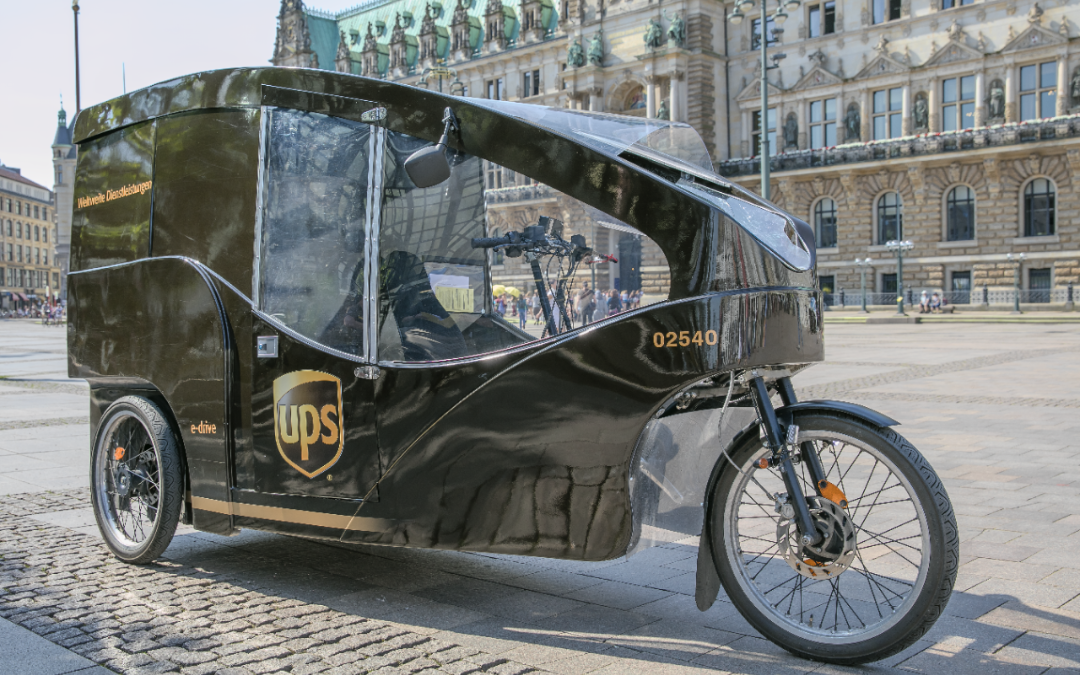 A global parcel delivery giant is on course to introduce ‘e-cycles’ to coincide with crunch climate talks in Glasgow after the First Minister personally intervened to speed up the green transport revolution.

Nicola Sturgeon agreed to help US freight company United Parcel Service (UPS) bring its ‘last-mile’ hop electric bikes to Scotland – which could come in time for the Cop26 climate change summit in November.

The First Minister took part in a private video conference with the company on December 12 last year in a virtual discussion event hosted by the London Chamber of Commerce.

Details of the meeting, published on the Scottish Parliament’s lobbying register, reveal that a senior executive from the company explicitly sought support from Ms Sturgeon as part of its green scheme.

Notes submitted by UPS on the register read: “We highlighted how UPS would like to work with the Scottish Government to roll out e-cycle projects in key cities for sustainable, final mile deliveries.

“The First Minister commented that this would fit in with the Scottish Government’s plans of working with businesses to deliver post-Covid sustainable economic growth. She committed to providing UPS with the right contacts at a local government level to further pursue this.

“As a result, a call was scheduled with Scottish Enterprise and subsequent calls have occurred with Glasgow City Council to discuss a cycle project to coincide with Cop26.”

The meeting – where Brexit, Covid-19 and Cop26 were due to be discussed – appears to have paid off as officials at Glasgow City Council (GCC) confirmed it had since been in contact with the multi-billion dollar American firm, following an introductory meeting facilitated by Scottish Enterprise, the Scottish Government’s economic development and business agency.

A pilot project is now on track to coincide with the United Nations event in the city – organised by the UK Government – when politicians from across the world will gather to promote green policy initiatives.

“The objective is to deliver the UPS last mile pilot project for Cop 26; the data collected from the pilot project will support the choice of a long-term location in Glasgow which will be explored as part of the new city centre strategy.

“GCC supports the development and implementation of sustainable last-mile delivery solutions which would alleviate vehicular traffic and have a positive impact on air quality.”

The council exceeded its 2020 target to reduce carbon dioxide emissions by 30 per cent after achieving 37.5 per cent in 2018 and is now aiming to reach net zero carbon by 2030.

It has plans to issue a specific carbon dioxide reduction target in its local heat and energy efficiency strategy and carbon management plan later this year.

The spokesman added: “Carbon dioxide emissions from transport have been one of the more challenging areas for us to deal with, with emission levels staying reasonably consistent from 2006 to 2018.

“Active travel has visibly become more popular throughout the city, and our spaces for people project has made cycling across the city safer and more enjoyable for a diverse group of users.”

It is hoped the introduction of e-bikes to replace delivery vehicles in the city will have a positive impact upon not only carbon dioxide emissions but also on nitrous oxide, sulphur oxide and ‘particulate matter emissions’, which can be dangerous to human health.

Scottish Enterprise said it had taken part in conversations to see how it can assist with identifying a city centre site where e-cycles can be stored overnight and from which deliveries can be made during the day, and a location next to the Clyde has been earmarked for the scheme.

A spokesperson said: “A key priority for Scottish Enterprise is to support low-carbon opportunities that will help Scotland attain a net zero economy.

“We will continue to work with partners across the public and private sectors as part of the collaborative effort to tackle emissions and achieve Scotland’s climate change ambitions.”

The electric bikes – which resemble three-wheeled tub-tuk vehicles popular in Thai cities – are designed to address growing emissions concerns and minimise traffic congestion. They are equipped with battery-powered electric motors and “customised, modular load containers”, according to the firm.

The e-cycle riders operate from locations called “eco hubs” positioned around the city, which receive package deliveries early in the day.

Peter Harris, vice president, international sustainability at UPS, said: “We have been in discussions in Scotland on the deployment of e-cycles. As these discussions related to e-cycles are still going on, we can’t confirm our specific plans for Scotland.

“Implementing these projects involves evaluating a range of factors – such as space for container staging, e-cycle parking and charging availability to support sustainable final mile deliveries for our customers.

“Cycle logistics is just one aspect of our continuing work to minimise the miles we travel and increase the energy efficiency of our transportation network, efforts that also include developing a range of alternative fuel or advanced technology vehicles to help us in moving our world forward by delivering what matters.”

The issue of high air pollution from traffic in Glasgow has been well-documented.

In January 2020, a study of the UK’s major urban areas estimated that the pollution caused by vehicle traffic in Glasgow was responsible for at least one in every 29 deaths in 2017.

Statistics also indicated that Glaswegians are 25 times more likely to die from respiratory illnesses caused by vehicle emissions in the city than by being involved in a car crash.

On the news that Sturgeon helped set the wheels in motion for the multinational parcel carrier, famed for its retro style brown delivery trucks, Scottish Conservatives’ housing, communities and social security spokesman Graham Simpson said: “It is welcome that such a major company such as UPS are looking to use Cop26 to promote e-cycle initiatives but it is important that all lobbying of senior SNP Ministers, including the First Minister are always made as transparent as possible with the public.”

He added: “The Cop26 summit in Glasgow presents huge opportunities to tackle our climate emergency and active travel projects can be at the heart of that.

“As we look to expand active travel and cycling projects in Glasgow and other Scottish cities, there must be guarantees that no companies or individuals are getting an unfair advantage due to having close relationships with the SNP Government.”

A Scottish Government spokesperson said: “As the national development agency, Scottish Enterprise is  responsible for delivering a significant, lasting effect on the Scottish economy, working with partners in the public and private sectors.

“During a virtual meeting with multiple members of the London Chamber of Commerce the First Minister participated in, UPS was advised to contact Scottish Enterprise to establish what, if any, public support may be available to support their growth ambitions, as is normal practice.

“We would advise any businesses seeking information on what public support may be available to them to contact their local Business Gateway or enterprise agency.”