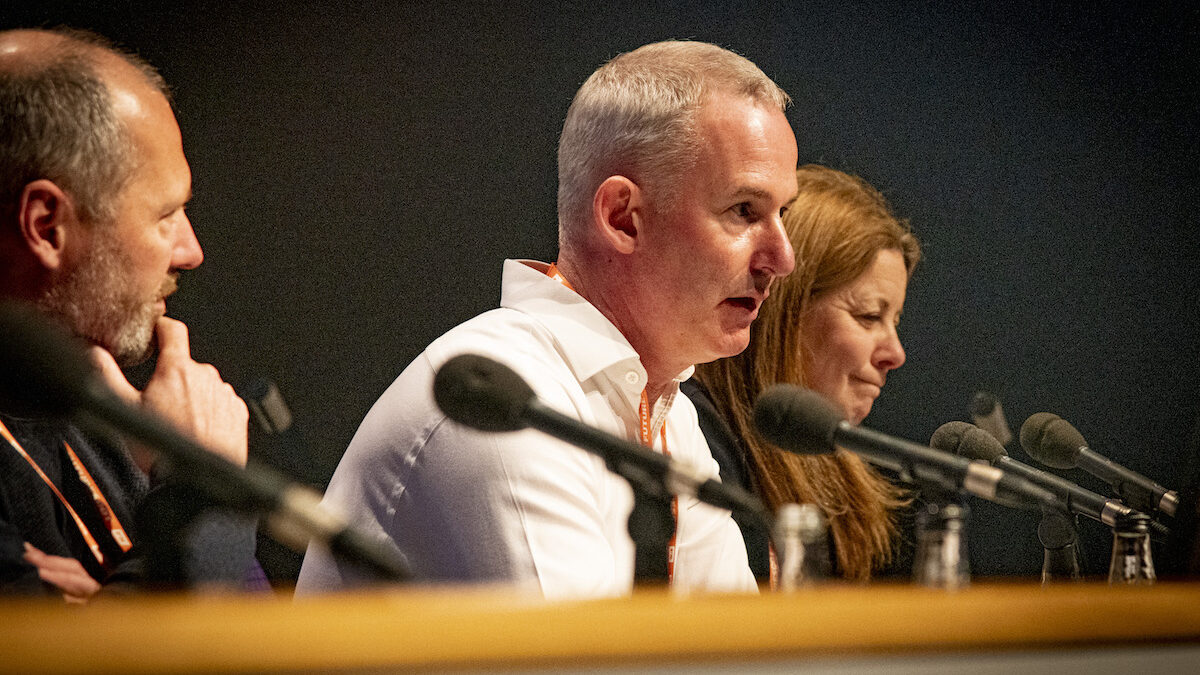 Logan, who spoke at Digital Scotland in Edinburgh last week, believes the issue stems from a feeling of “angst” among secondary school teachers when it comes to computing science.

He said: “Some teachers are much more confident at teaching programming than others. In many cases, for example, we are teaching computing science with non-specialists who are not really skilled in programming and those kind of techniques.

“So that in turn causes the syllabus to have to be dumbed down, frankly, to make it teachable. And that makes the subject more boring and reduces the impetus on creating strong programmers at school level – which means when our students go to university, they’re behind their European counterparts.

It is a concern that Logan, who authored the Scottish Technology Ecosystem Review, witnessed first-hand when his son was taught computing science by a home economics teacher.

He said: “We wouldn’t accept that if it was mathematics… and I think we’ve got to hold ourselves to that standard because the countries that we are trying to emulate and compete with – they’re doing that. So, we’ve got to really take this seriously.”

Another problem Logan pointed to is the rapid rate at which computing science changes.

He said: “A teacher graduating – even with strong programming skills 12 years ago – probably hasn’t been exposed to app development, for example. And that’s where the interesting projects are for children nowadays.

“We’re trying to create the software engineers of the future. So we have to be able to train children early in getting programming skills, and that requires us in turn to have a teacher base that’s confident to teach that.”

To tackle the issues, Logan is now calling on the government to implement “an ongoing, entirely voluntary, intensive training programme available for teachers throughout their careers”.

“I think that would reduce some of the anxiety about teaching some of these points and it would allow us to create a more modern syllabus and a more deeper syllabus for programming,” he said.

Logan also revealed that Scotland’s education secretary Shirley-Anne Somerville has committed to a number of actions to transform computing science in schools.

He told Digital Scotland delegates that she was “extremely supportive” of his request to establish a new education senior steering group – made up of key stakeholders from various education bodies – to “authorise, give license and direct the relevant people in our respective organisations to solve these problems in a collaborative fashion”.

He said: “I think one of the challenges in computing is that there is a lot of stakeholders. And there’s nobody who owns the problem singly in one body. And therefore, if you’re trying to change anything, it requires quite a lot of coordination. And that’s just difficult. Whenever anything crosses a departmental or organisational boundary, you can multiply the timescale to get it done by some number.”

The new group will seek ways to get “a lot more teachers into the profession” and create a programme to upskill teachers.

Logan added: “I don’t think that’s the last word on the issue. I think these are, frankly, in my view, modest beginnings because they create a foundation we can build on… We’ve got to get the foundations in place, get enough teachers confident to teach the subject, a syllabus that’s interesting, and so on.

The team will include the chief executives of the Scottish Qualifications Authority, Education Scotland, the Scottish Funding Council and Skills Development Scotland.

Head teachers and the Association of Directors of Education in Scotland will also be represented, as well as the learning directorate and the economy director.

In addition, Ms Somerville has promised the government will invest £1.4 million to create the Scottish Advancing Computing Science (STACS) – an organisation run for and by computing science teachers to share best practice in the subject across all schools.

The network, which is one of the recommendations set out in Logan’s report, will be hosted by the University of Glasgow.

Despite a national focus on digital skills and education, secondary schools in Scotland are finding it increasingly difficult to deliver computing science.

The latest official data shows the number of pupils studying the subject has declined significantly over the past decade, while the gender gap has grown. In 2001 there were 28,393 pupils who sat computing science across all levels, and 9,825 girls. As of 2020 there were 9,873 pupils who took the subject and just 1,895 girls.

Scottish Government statistics also reveal that between 2008 and 2020, the number of computing science teachers in Scottish schools fell from 766 to 595.