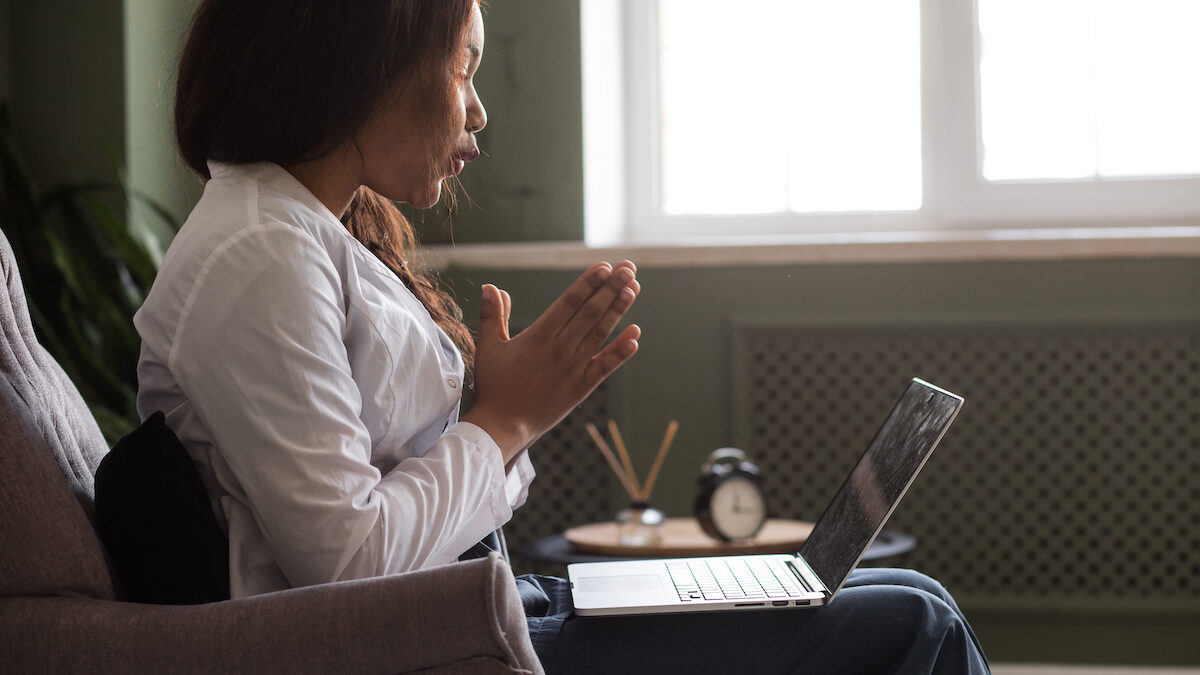 Group therapy sessions for patients with mental health problems are being held for the first time online with the expansion of a national video consulting service.

The NHS Near Me platform, used by clinicians to connect directly with their patients remotely, has developed a new tool for group sessions to support people with a range of conditions, including pain management and diabetes.

The new feature, which is available for use across local health boards, social care services and the wider public sector, enables providers to host ‘virtual clinics’ with up to 30 patients.

This is a “game-changer” for healthcare in Scotland says Marc Beswick – the national lead for Near Me Networks in the Scottish Government’s Technology Enabled Care Programme.

Since Near Me was first trialled in Scotland in 2016, he says, there has been a “long-term aspiration” for Attend Anywhere – the Australian software company behind the platform – to develop a tool for group sessions.

The site was originally “never built to cope” with more than four of five people on the same call.

The demand was strengthened when Covid struck and in-person treatments were halted across the country.

Beswick says: “There were so many groups running pre-pandemic where people came to receive education, health advice, support each other. But all that completely stopped.

“So this need for a group consulting platform has been a frequently requested and much sought after feature. And it’s taken quite a long time for us to get to a point now, where we’ve got a platform that will hold 30 people, all the safeguards are in place, clinicians can use it, and it’s approved for use across the public sectors.”

But how does it differ from Zoom, or Microsoft Teams, which can host meetings with up to hundreds of users?

Beswick says: “It is possible to have group conversations on Microsoft Teams and we’re keeping an open mind as a network as to which platform may or may not work the best in future.

“We are working with Microsoft on looking at what does Teams need to be like for it to be easy to join for patients and safe and secure for their personal information? And also for the safety and security of the staff using it.

“Teams has come from a commercial perspective, around sales, sharing information, making connections – and that’s not the kind of stuff you necessarily want when you’re dealing with patients and confidential information.”

With Attend Anywhere, only service providers can see the names of their guests, and no patient details are kept once the call has finished.

The Technology Enabled Care team is currently supporting clinicians in Lothian, Lanarkshire, Highland and Grampian to run groups, which launched at the beginning of this month.

Beswick says: “We want to make sure these early groups are as successful as possible. And also learn from these groups, so that when we meet other clinicians to plan more groups, we can hopefully share what was helpful and what things to avoid.”

Though it will “take time for the momentum to gather and for groups to spread out across Scotland”, Beswick is optimistic that the service, which has been piloted among clinicians over the past year, will be a success.

“Near Me went from about 300 [appointments], a week to 22,000 [appointments] a week during the first few months of the pandemic, so I do think groups will take off. I’ll forecast a decent amount by the summer.”

But as Scotland continues to emerge from the pandemic, will the need for online groups stick around?

Beswick says: “There’s still quite high demand for this in terms of the benefits around traveling for patients, traveling for clinicians and efficient use of clinician time.

“And also, within the hospital estate, or the NHS estates – space is a real premium. Because many places are still enforcing social distancing, space is even tighter now.”

Sessions can also be held at any time during the day, making them easier to fit around participants’ work schedules.

Already, this seems to be making an impact on the number of patients seeing the courses through.

Beswick says: “Anecdotally, some services have said that people have been able to complete courses more successfully digitally rather than in person.

“Having to physically get to a place to go to a group, I think logistically poses people more problems than joining online.”

Despite the benefits of remote treatment, Beswick is keen to stress that patients will not be limited to virtual-only group sessions.

He says: “There will still be people who can’t access the technology or don’t have the right devices or perhaps aren’t particularly confident on video. So we want to make sure that this is a choice.

“So not everybody will want to choose to come to a video group and services will still need to have to look at alternatives for those people that a group is not going to work for them or the type of health or care need they’ve got doesn’t necessarily lend itself to a digital group.

“There’s  conversation to be had, I think, between clinicians and patients around what’s going to work for you? You know, we don’t want to make it digital only, we want to give people an option and a choice.”

There has been a surge in backlogs across Scottish healthcare since Covid struck.

Data released last summer revealed that the number of children and young people waiting more than 12 months to start mental health treatment was almost three times higher than the year before – the worst figures on record.

The Public Health Scotland statistics showed that for the quarter ending March 2021, 72.5 per cent of youngsters started treatment within 18 weeks of referral to children and adolescent mental health services (CAMHS), falling short of the Scottish Government’s “standard” of 90 per cent.

The most recent statistics, from December 2021, showed 78.6 per cent of children and young people seen within 18 weeks.