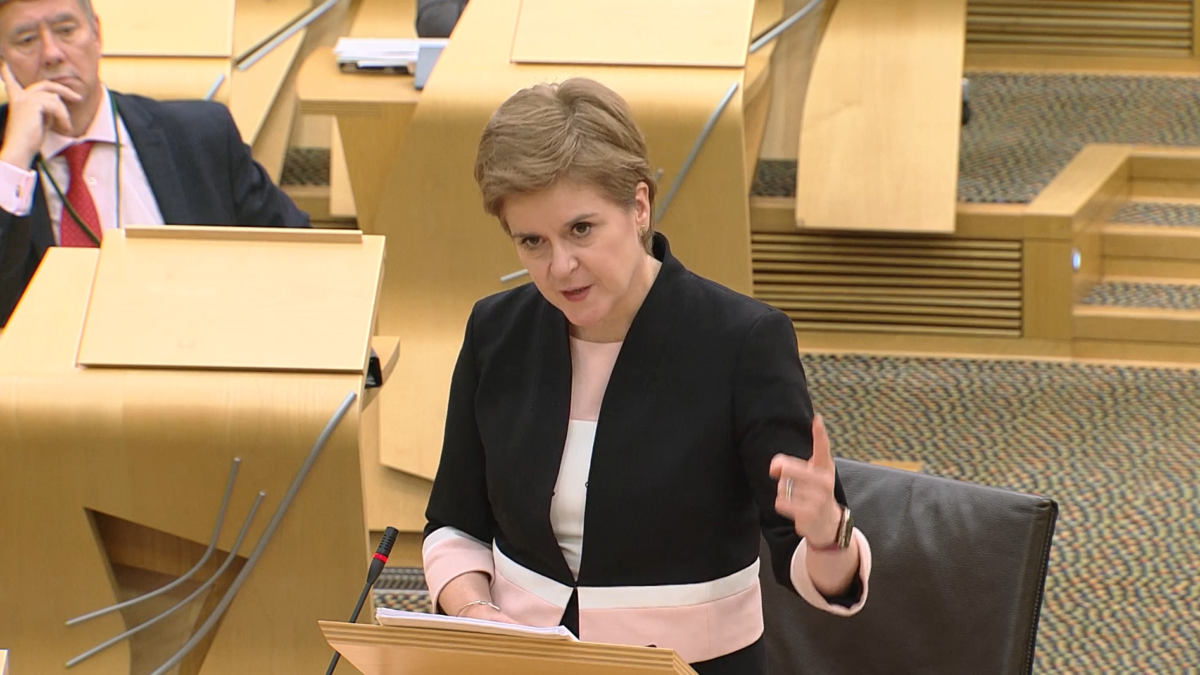 Nicola Sturgeon has blamed a technical fault in NHS systems for the failure of the new covid status app when it was launched last week.

The First Minister said it was “deeply regrettable” that an ‘error’ occurred in the NHS system that stores citizens’ community health index (CHI) numbers and the app, which she said was not at fault.

Ms Sturgeon gave an explanation this afternoon to MSPs at the Scottish Parliament who she reassured that problems with the app have now been remedied – encouraging businesses and individuals to use it.

Problems with the app were first reported last Thursday on social media where users shared difficulties of being able to link the information they put into the NHS app with their medical records.

It left many unable to download their covid vaccination certificates, which are to be required as proof of entry for many venues when new entry rules are enforceable from October 18.

The First Minister said: “The app which we can opt to use to show evidence of our vaccination status became available for download last Thursday afternoon. I am of course well aware that many people found it extremely difficult to use the app initially.

“In particular, many found that the app was unable to locate their vaccination record from the information that they had provided. This problem was especially acute over Thursday evening and Friday. I know this caused extreme frustration for users who wanted to download the app as quickly as possible and also for businesses and events organisers who were planning to test their certification arrangements over the weekend and I apologise for that.

“The problem was not with the app itself but with the NHS systems that it links to. Essentially, the high level of demand after the launch of the app, combined with an error in one part of the NHS system, meant the information wasn’t being sent quickly enough from the NHS system to the app. This also for a period caused problems for those requesting paper copies of vaccination certificates or seeking to download a PDF.”

She added: “I’ve tried to set out here as clearly as possible the technical reasons for that; it is deeply regrettable but action was taken to resolve the issue. The issue in essence was the linkage between the app and the NHS systems.”

Ms Sturgeon insisted that improvements have now been made to the NHS system – as of Friday evening – and that the backlog of people waiting for their information to be matched had been cleared by Saturday lunchtime. She said the Scottish Government would continue to monitor the performance of the app and engage businesses in the sectors where certification will be required.

She said that certification testing arrangements put in place at Hearts and Rangers football clubs over the weekend managed to check 20 per cent of fans and government officials also met with those clubs, plus Aberdeen, Celtic, Hibs – and the managers of national stadium Hampden – yesterday to ‘consider any lessons learned’ from the weekend experiences.

In spite of criticism, she insisted that the covid certification remains a “proportionate way of encouraging people to get vaccinated and also of helping large events and nighttime hospitality to keep operating during what will be a potentially difficult winter.”

As of midnight Sunday, almost 380,000 people had downloaded the app, she added, according to figures obtained from Google’s Android and Apple’s app stores, and that further data will be published when it becomes available.

“However, this raises even more questions about the justification for the SNP’s vaccine passport scheme, which has been an utter shambles from the very beginning.

“The app was delayed and only came out less than 12 hours before the scheme began. Instantly, it was a disaster. People couldn’t find the app. They couldn’t get the app open. It didn’t work.

“There was no public information campaign. Businesses had absolutely no idea what they were supposed to do. Football clubs ignored it. What an avoidable own goal this has been.

“Nicola Sturgeon sounds ridiculous when she claims the scheme came into force “as planned”.

“But the problem wasn’t all demand, it was down to serious errors in the SNP system.”

Pupils to be offered online study support ahead of exams

As many as 1,200 COVID-related domains are still registered each day

‘We are on the cusp of a huge health tech revolution’, says health secretary on launch of new National Artificial Intelligence Lab