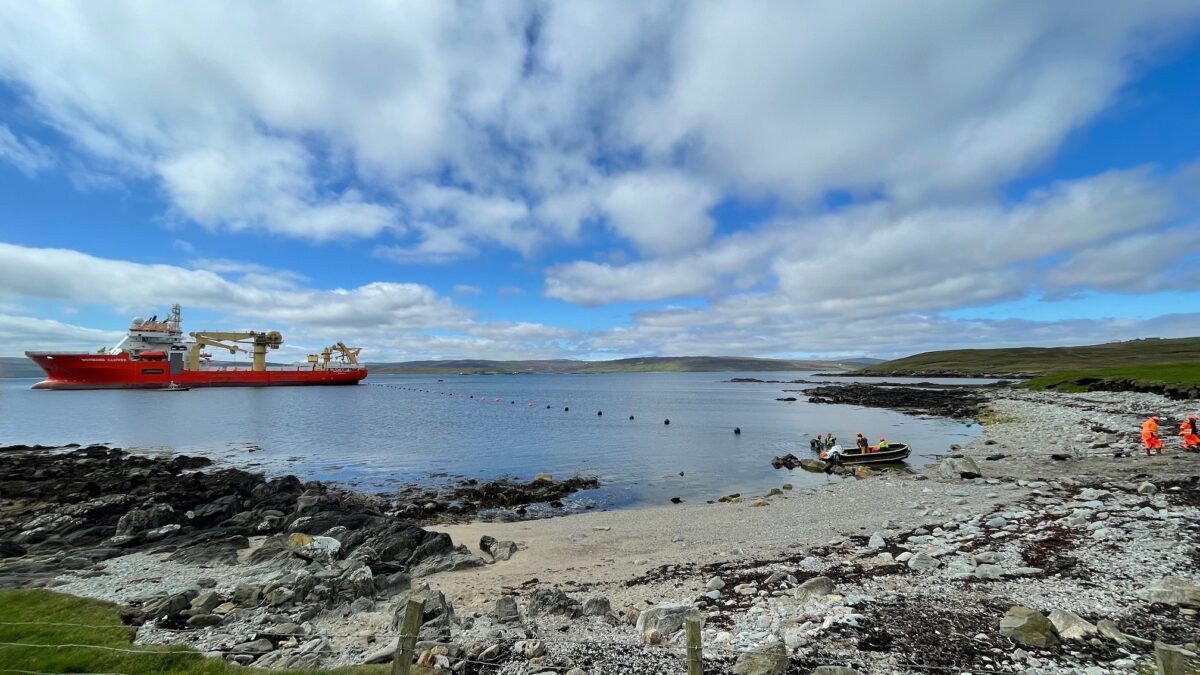 The subsea cable landing points in Shetland. The Normand Clipper was one of two vessels which had to negotiate unexploded Second World War munitions to lay the cables for Openreach/Supplied.
Connectivity

Onlife life transformed after drama in the deep seas

It is a project designed to deliver the most up-to-date of technology, but it could have been blown off course by a military relic.

The Royal Navy had to step in when an unexploded torpedo was discovered in Scapa Flow, the UK’s main naval base during the First and Second World Wars, while work was underway to connect Orkney residents to gigabit-capable broadband.

A Navy dive team from HM Naval Base Clyde carried out a controlled explosion at a site between Flotta and South Ronaldsay as part of seabed surveys being carried out by the MV Athena in advance of the laying of subsea cables.

The work was part of the Scottish Government’s Reaching 100% subsea cable deployment which has laid a total of 16 new cables totalling 224km. These cables are set to transform the online lives of islanders, who had previously laboured under near dial-up speeds for their internet experience.

The complex build, which started in May 2022, has been years in the planning and is a major milestone for the R100 programme, a commitment to ensure every home and business in Scotland can access superfast broadband.

Robbie McGhee, deputy director, digital connectivity at the Scottish Government, said the “drama” had passed and generally speaking the project, which will connect homes and businesses across the north of Scotland and on 15 islands, had otherwise fared “remarkably smoothly”.

He added: “Delivering subsea connectivity to these 15 Scottish islands is a significant achievement for the R100 programme.

“The complex subsea work provides the foundations to deliver access to gigabit-capable connections in some of Scotland’s most remote communities, providing access to resilient infrastructure that is on a par with what is available in our cities and large towns.

“The Scottish Government is investing over £600 million in the programme and we currently expect to connect more than 114,000 premises through the R100 contracts and many more through the R100 Scottish broadband voucher scheme.“

Under the programme, the new infrastructure will improve connectivity to:

Clive Downing, R100 programme director, said: “The fact that R100 is bringing gigabit-capable connectivity to these islands is a real game-changer. At over 30 times faster than the original Scottish Government commitment the technology will take time to roll-out, but it is truly future-proofed.”

With the fibre cables laid safely by teams on the Normand Clipper and CS Sovereign vessels, and while post-laying work continues, the delivery partner Openreach will turn its attention to building onshore infrastructure to link homes and businesses to the network, with the first connections expected next year.

Robert Thorburn, Openreach Scotland’s partnership director, said: “Subsea work is an incredibly specialist area of engineering. There are only a few cable ships operating around the world, and they’re in constant demand.

“Bringing the logistics together in the islands – where we’ve been at the mercy of strong currents and often inhospitable weather – has been a huge challenge.

“The islands are areas of enormous environmental sensitivity. Protecting the wildlife and landscape is critical, and we’ve worked closely with Nature Scotland, Marine Scotland, Crown Estates and local authorities to secure more than 60 permissions for the project.

“We even had to contend with a torpedo on the seabed and an ancient hand grenade found on the shore, metres from a new landing point. It’s been a rollercoaster of a project – having delivered the first subsea programme to the islands back in 2014, we knew what to expect.

“Reliable, fibre broadband will be life-changing for islanders, and bring new opportunities in every sphere of life.”

However, concerns have been raised that “not everyone” on the islands will be connected.

According to Scottish Liberal Democrat MSP, Beatrice Wishart, the communities of Isbister, Nisthouse and Skaw in Whalsay – the sixth largest of the Shetland islands – will be excluded from fibre broadband, despite Openreach’s work to lay a cable to the island.

Wishart, who represents Shetland, highlighted the issue at a rural affairs, islands and natural environment committee meeting at Holyrood.

Speaking to Futurescot, she said that the issue was one of “inequity”, adding: “Public money will be spent installing a subsea cable to Whalsay for superfast fibre broadband from which residents in Isbister, Nisthouse or Skaw will be excluded.

“This will impact daily life, as utilities increasingly move online, and limit economic growth in parts of Whalsay.

“Island communities rely on communication between the Mainland of Shetland and Scotland, limited internet capacity hinders this and does not allow for innovation such as online medical appointments.”

After informing Wishart that there are “no R100 contracted properties in Isbister, Nisthouse or Skaw”, a spokesperson for the Scottish Government’s digital directorate revealed that bidders “designed their networks for the properties they were confident of building to with the available funding and unfortunately this hasn’t included the above communities”.

The excluded areas will be expected to rely on the government’s broadband voucher scheme – introduced in 2020 to enable people who would not have access to superfast broadband by the end of 2021, or where there was no planned coverage, to apply for a voucher to get connected by another supplier.

But according to Wishart, only nine of the 60 of the suppliers the Scottish Government signed up to the broadband voucher scheme can provide an installation in Shetland.

It comes after the Auditor General for Scotland provided an update on the Scottish Government’s R100 programme, which said that completion of infrastructure for the North contract was expected by 2026-27 – six years later than originally anticipated.

The delay is due to a legal challenge to the North contract, which meant that it was not awarded until December 2020.

The report, published in March, found that around 107,000 premises remain to be connected through the three R100 contracts. It stated: “Many of these are in the hardest to reach locations, with the majority in the North. Connecting these remaining premises, will be challenging and expensive.”

Praise for Openreach after engineers complete gigabit-capable network in Kilmarnock