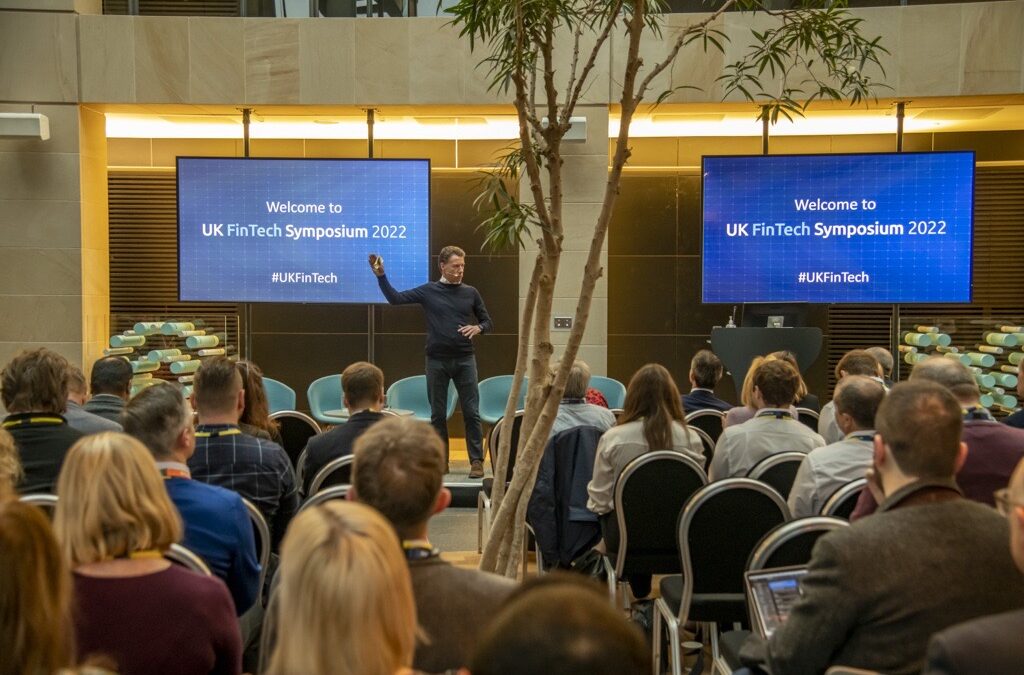 The UK Fintech Symposium held at NatWest’s Gogarburn headquarters saw leaders from ‘cluster organisations’ across the UK convene to chart the next steps for the industry.

On the agenda was a new private sector-led body set up following a landmark review of the sector last year, carried out by former Worldpay boss Ron Kalifa.

Charlotte Crosswell, as the newly-appointed chair of the Centre for Finance, Innovation and Technology (CFIT), backed by £5m in UK government funding, made her first public appearance in the role.

She said: “It’s great to be back in the NatWest building in Gogarburn. I was last here when we did a fintech challenge with NatWest, pre-pandemic, looking at how we use fintech for good. So it’s great to continue those types of discussions and see the commitment here.

“But for me, we could be in Scotland, in Bristol or in Manchester, Leeds or anywhere in between. It’s really important that we not only shine a spotlight on where we are in fintech, not just in London, but all around the UK and how we put that together into a clear vision for the future of all our regions.”

The ‘levelling up’ theme was reflected in an opening speech from UK government exports minister Andrew Bowie, who added: “More than a million people work in financial services across the United Kingdom and two thirds of them are outside the capital. In all bar two British regions, financial services are the largest services exporter, taking the best of British to the world. That’s what levelling up looks like in practice.”

Mr Bowie shared some recent statistics which showed the value of fintech for Scotland, and the UK. According to the figures, there are now 8,000 jobs in the sector north of the Border and almost of half of Europe’s fintech ‘unicorns’ were created in the UK.

He said: “Last year, the UK racked up more investment than France, Germany and the Netherlands put together and so far this year five of the 10 largest fintech across Europe, the Middle East and Africa were closed on our shores.”

Nicola Anderson, CEO of FinTech Scotland, reinforced that view. She said the Scottish cluster is now up to 208 “inclusive, collaborative and innovative” fintechs. Investment in the sector has also reached £1.3bn “with a unicorn in that number this year”, she said.

The Scottish Government’s business minister, Ivan McKee, also appeared at the conference, with both governments committed to developing the sector.

The regional fintech cluster organisations – the FinTech National Network – were all represented at the conference. Speakers from FinTech Wales, FinTech Northern Ireland, FinTech North, FinTech West, SuperTech (West Midlands) and FinTech Scotland took part in a regional leadership session, showcasing each of their own regions’ strengths.

Innovate Finance, the national body representing the sector, and the Financial Conduct Authority, the regulator, were also present alongside some established financial institutions including Dundee’s NCR – the company that brought the cash register to the world – and the next generation of fintech startups.

The consensus was that Britain, as a global forerunner of open banking standards, had stolen a march on competition around the world with a positive vision for how regulation and innovation can work together to help the sector grow.

However, some challenges remain. The post-Brexit environment has yet to settle on crucial factors concerning skills and workforce planning and financial ‘passporting’ for British products and services to fit into overseas markets. And companies were cognisant of investment opportunities being affected by the economic downturn.

Janine Hirt, CEO of Innovate Finance, reminded the audience though of the positive role that fintech can play in society.

She said: “We need to be celebrating the role that fintech plays, having a positive impact on us all, ensuring greater financial inclusion, greater financial wellness, and helping individuals and SMEs to understand, grow and manage their money.”

She noted that 65 per cent of all lending is now done by fintechs, either ‘challenger banks’ or alternative lenders, which are “powering the engine of our economy”.

In terms of investment, the UK is second globally to the US, with $9.1bn secured in the first half of this year.

The afternoon session provided a showcase for some of most promising Scottish fintech startups. CienDos, a climate finance focused company, Legado, which helps people manage their personal financial documents, Snugg, an energy efficiency app, Nude, a platform which helps young people save for their first home, and Cybershell, a cybersecurity platform, were all able to spotlight their products and services.

Stephen Ingledew, chair of FinTech Scotland, said: “This event has been a fantastic opportunity to bring together a vibrant and maturing UK fintech industry. The FinTech National Network has become a diverse and mutually reinforcing entity in its own right, with cluster organisations forging their own paths in quantum, reg-tech, data, or cybersecurity and providing collaboration opportunities between the regions. When viewed as a whole it is a really compelling picture for national and regional policy coordination as well as a clear gathering point for local fintechs themselves looking for support to take their products and services to the next level.”

As seen in today’s copy of The Times, click here to view.

New fintech roadmap aims to create 20,000 jobs over next decade