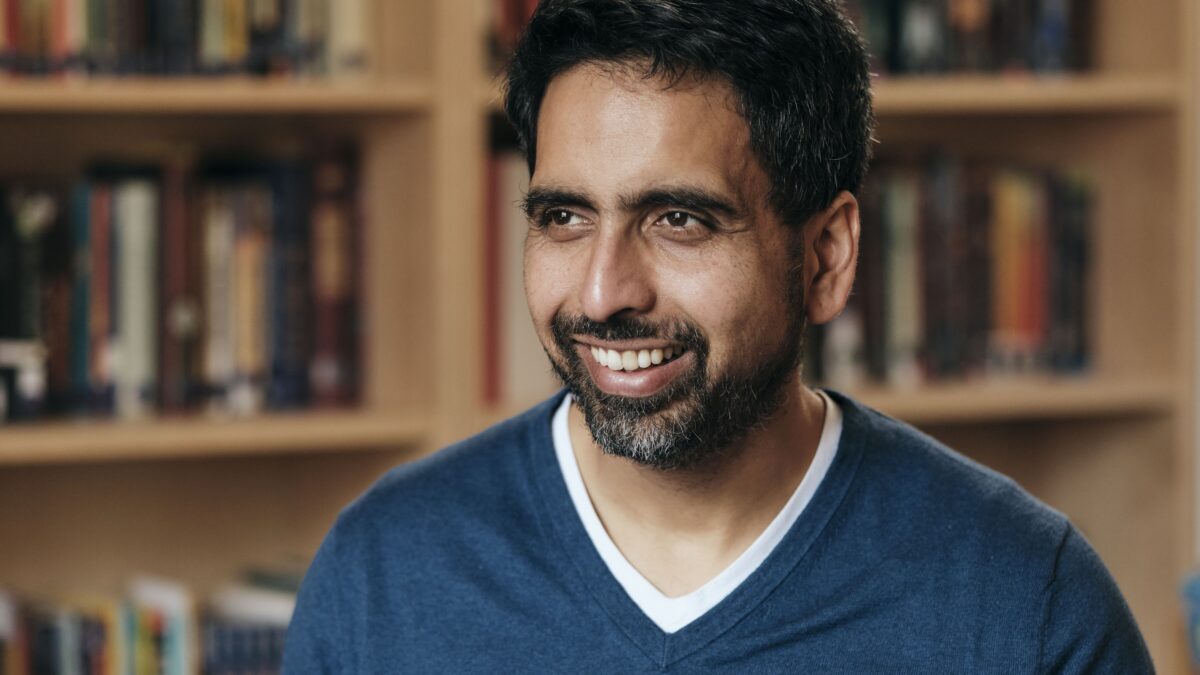 It has been 16 years since Sal Khan started a YouTube channel from his closet-turned-office in California in order to help his cousins with some maths problems.

Since then, the MIT and Harvard educated tech whizz has gone on to found what is now effectively the largest school in the world, helping more than 18 million learners across the globe each month.

Khan Academy – a self-described philanthropic venture – offers access to more than 70,000 practice problems, quizzes and articles, to help students of all ages both in and outside of the classroom.

Available in 51 languages and used in more than 190 countries, anyone with a device can access the school’s range of free content via web browser. Once a course has been selected, learners are able to view relevant lesson material and get stuck in.

Futurescot spoke to the Silicon Valley entrepreneur about the rapid rise of Khan Academy, the impact of the pandemic and what’s in store for the future of remote learning.

What inspired you to give up your career to teach online?

I’ve always been intrigued by it [education]. But I was also gravitating to other things. I worked in tech, I was working in finance. But when my cousins needed help, I felt I could help them. And it was fun for me to be able to connect with them remotely – they were in New Orleans, I was in Boston at the time. But in the back of my mind, I did feel that, well, maybe if I can help them, I could learn more about this thing that I’ve always cared deeply about. And it could eventually turn into something larger. It was just a little glimmer in my eye. It wasn’t a real plan. But as word spread in my family to the free tutoring that was going on, I was tutoring more and more family all while I was an analyst at a hedge fund.

I started making videos for them – they famously told me, they liked me better on YouTube than in person. And so the pieces were coming into place. And these [videos] were public. And I started getting letters from people all over the world saying how it was helping them pass an exam or how it was making them excited about science or how it was helping their children who might have had say a learning disability keep up with their class. And so I was hooked.

By 2009, I frankly had trouble focusing on my day job. And so I set up Khan Academy as a not-for-profit with a mission of free world class education for anyone anywhere. And I took that plunge, because I just thought – you get one life – how do I use it as optimally as possible? And I thought maybe just maybe this could be where I might be able to make a positive impact on the universe.

How has Khan Academy become the world’s biggest school?

I quit my job back in 2009. At that point, there were about 50,000 to 100,000 folks using Khan Academy. And even then it dawned on me that in a given month, even then, when I was just one person in a walk-in closet, Khan Academy was reaching more students than Harvard had in its history. And obviously, it’s not an apples to apples comparison. But it was giving me a sense of the scale. And I knew that even if we were reaching 50,000 or 100,000, then one day we could reach maybe 50 or 100 million, or maybe one day, we could reach 5 billion.

That was kind of what gave me at least the aspiration to provide a free world class education for anyone anywhere. And then if you fast forward to today, those aspirations have come to pass, and we have over 120 million registered users, 20 to 30 million students every month – and we had 12 billion learning minutes on the site last year.

As large as those numbers are, I still know that this is still only a fraction of all the potential that, frankly, humanity needs and that the world needs. I would like to see all of those numbers grow, by at least a factor of 10, maybe a factor of 50. We can’t grow much more than a factor of 50 – then we run out of people.

What sets Khan Academy apart from other virtual education facilities?

It was a blessing that this started as a family project. And it started as a pretty small project. And it is still relatively small compared to the problem we’re trying to address. But I think that keeps it human. There’s so much that we experience in the world, especially textbooks and software, that doesn’t feel human – it feels like it was made by a corporation. But I like to think that when people experience a Khan Academy video, or work on our software, they feel connected with the human beings who are trying to help them.

How did the pandemic impact Khan Academy?

So when the pandemic hit, I first got a foreshadowing in February of 2020, that we could be very relevant when a teacher in South Korea wrote to us and said that he was using Khan Academy to keep his kids learning through their nationwide physical school closures. And that was when it dawned on me – ‘wow, whole countries are shutting down their schools because of this pandemic’.

And then we know what happened within a month, the rest of the world, including the US and Scotland, and everywhere else, had shut down their schools. And we saw our traffic increased by a factor of three. or, become a factor of three, and went from about 30 million learning minutes a day to about 90 million learning minutes a day. So we just tried to keep up with that. We tried to provide thought leadership and everyone in the system – parents, students, educators – were just figuring out trying to make sense of what was going on.

We also recognise that as important as the asynchronous learning – the at-your-own-time-and-at-your-own-pace learning – is on Khan Academy, there was a huge gap. People were feeling isolated, they wanted to be connected to other people. So we spawned up a new effort called schoolhouse.world which is another not-for-profit with a mission of connecting the world through learning. And schoolhouse.world provides free tutoring and most people say ‘how do you provide free tutoring tutoring?’ and the way we do that is by having high quality certified vetted volunteers, some of whom are high school or college students.

Do you consider digital teaching just as valuable as in-person teaching?

My answer would be – it depends. I’ll be the first to say if I had to pick between an amazing teacher in person, and no technology, versus the fanciest technology, digital learning whatever, I would pick the amazing in person teaching with no technology any day. Now, luckily, we don’t have to pick one or the other. But we can use both.

But even when you use the technology, it’s also important to know why you’re using it, you shouldn’t just be using it because it’s cool, or it looks modern, you should have a pedagogical goal. And for us the pedagogical goals are: how can learning not be bound by time or space? How can you personalise the learning so it meets students where they are? How can you provide students and parents and teachers with a lot more data and information that then they can act on to even accelerate their learning even more?

In Scotland there is a digital poverty gap, which meant some kids were unable to access at-home learning during the pandemic. Why should remote teaching be made accessible to all?

We have to make sure that not just devices, but sufficient devices are available with internet access everywhere, I think it has to be treated like clean drinking water or heating, we wouldn’t consider a house a suitable place to live if it did not have heating or clean drinking water.

And it’s not just for education or to be able to access Khan Academy. It’s also, frankly, just to plug into the economy, to be able to look for a job, to be able to stay in touch with friends and family…. I hope that the pandemic has put a fire in everyone’s belly to close this gap sooner rather than later. It’s definitely – it’s not cheap – but it’s within the means of countries that are fairly wealthy like Scotland, or like the United States, to close the gap for this subset of the population that don’t have it. And I think if you close that gap, it’s going to lead to far more economic growth than the cost. So I think it’s a genuine good investment that’s actually going to grow GDP.

Remote learning around the world has taken off during the pandemic. What developments in the digital learning field do you predict?

If we wanted to speak specifically about technology… artificial intelligence and virtual reality are going to play a role in, I would say the 10-year horizon, but I actually don’t think those are the most important things right now.

I think the most important things are – the tools are already good, they need to get better – but how do we integrate them with the system as it is? And then how does that unlock things like personalised learning and mastery learning where we don’t just shuttle kids along at a fixed pace and they accumulate gaps. Give them the opportunity and incentive to fill in their gaps, and then that leads to opportunity and credit.