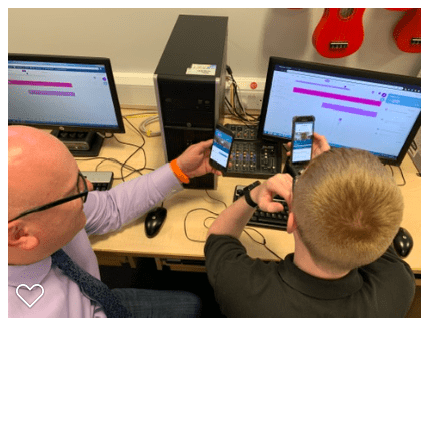 Teachers and pupils at Arran High School have used Soundtrap for Education for the past two years to compose music, tell stories and explore communication in and outside the classroom.

The programme has now become embedded in many parts of the school’s formal and informal curriculum and is used as the primary means of teaching the composing of music led by Andrew Dickie, Arran High School’s Head of Music.

Soundtrap, a Spotify company, is an easy-to-use online music and podcast studio that integrates with major learning management systems, including Google Classroom, Canvas, Schoology and Musicfirst, as well as Noteflight and Flat.io.

The cloud-based studio enables music-makers to compose, podcasters to tell stories and teachers and pupils to explore communication and co-creation in formal and informal settings. With Soundtrap for Education, teachers and pupils can collaborate in a safe, online environment in a place and time of their choosing.

“For Arran High, collaboration has been one of the most important features of the programme as it has allowed all pupils to be included – even those who would often struggle on their own,” said Andrew.

“Having used other software, we felt Soundtrap best catered for all our needs. The ability to collaborate online was a major advantage – particularly as an island community where pupils often live quite far away from each other and the ability to call round to a friend’s house in the evening is not always an option – even more so during lockdown.”

“Pupils have been busy creating content for ArranSound.com and Soundtrap has made it possible for our pupils to work from home on dedicated software – picking up from where they left off in school.”

Andrew added: “It has brought our community together in ways that we would never have imagined, particularly during these long dark months and when lockdown has thwarted so many other activities we would normally be involved in.

“We plan to create more music and use Soundtrap across the wider school curriculum – particularly the podcasting feature. I know our English and Modern Languages Departments are already very interested in further exploring its capabilities.”