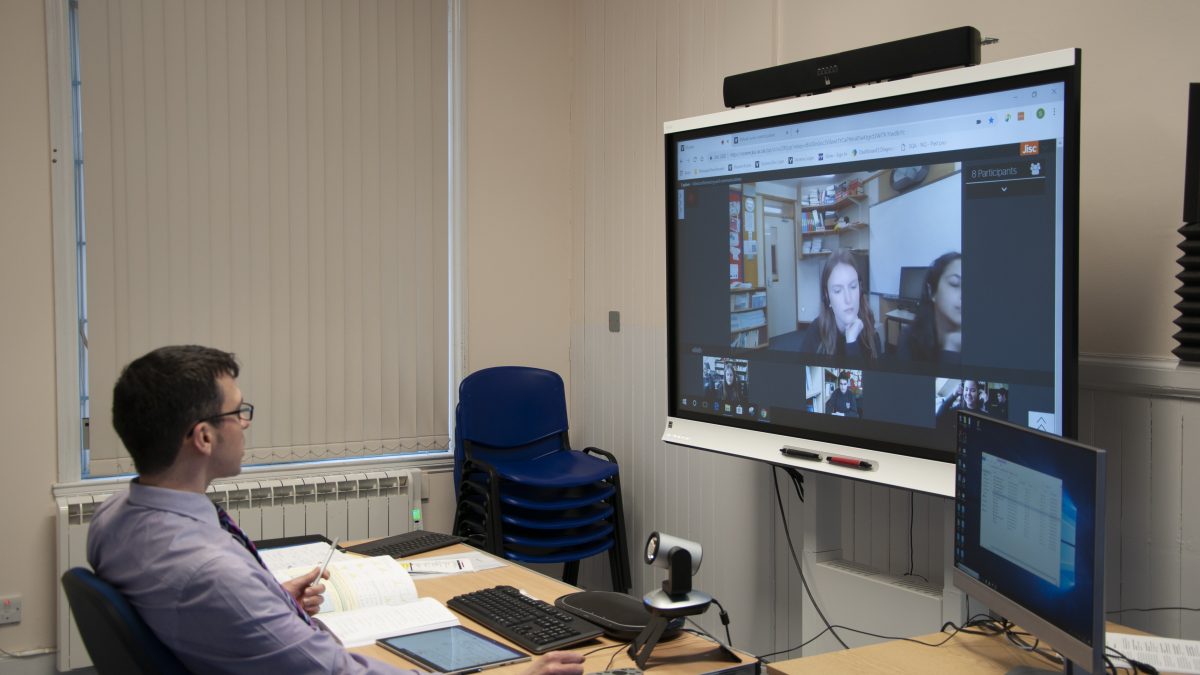 The e-school ‘in the right place at the right time’

It’s hard to imagine many teachers would relish the opportunity to lead Scotland’s “most scrutinised school” through a global pandemic – but for one man from Harris, the experience has been “exciting, exhausting and exhilarating.”

“I’m going to change the ‘e’ to mean all these things,” jokes Angus Maclennan, headteacher of the Stornoway-based remote teaching facility e-Sgoil which was thrown into the national spotlight last March when schools locked down.

Created in 2016 by “two men, a computer, and an office” as a “local solution to a local problem”, a remarkable year of expansion has seen e-Sgoil transformed into a nationwide school.

Its team of teachers, many on flexible and part-time schedules, has increased more than eight-fold to over 120, and their classes now reach students in all 32 Scottish council areas as opposed to a handful.

“We were in the right place at the right time when Covid struck. To us, it presented more opportunities than it did challenges,” MacLennan says. “We’ve been asked to do things that would normally take months – in days.”

The former Gaelic teacher was approached by Education Scotland shortly before the first lockdown – “we were seeing the storm clouds on the horizon” – and a new partnership was formed to help deliver remote teaching to pupils across the entire country.

The digital school had to “ramp up very, very quickly” as from that moment it was instrumental to the National e-Learning Offer – an online programme that compliments the curriculum – and which has been a lifeline for thousands of students, teachers and parents during the public health crisis.

In the lead up the assessment period in April, e-Sgoil’s study support programme – comprised of 80 courses – helped over 14,000 pupils.

Maclennan largely attributes e-Sgoil’s success to its close working relationship with Education Scotland and West OS – an online bank of student resources – as well as the Northern Alliance, the Scottish Languages Centre, Keep Scotland Beautiful and digital platform Glow, which coupled with Microsoft Teams, is how teachers are beamed into learners’ homes.

But back to the “e” – what does it stand for? “It was originally electronic,” says Maclennan. “But then very quickly became equity.”

He is committed to “equity of opportunity” for all students, which means access to specialist cover teachers and access to all subjects. It was a lack of this in the Western Isles that first inspired e-Sgoil.

Maclennan says: “From day one, our core business has been to supply specialist subject cover for schools, if they cannot get a teacher to teach physics in Barra to cover an emergency, we will try to find one, somewhere, I couldn’t care less – she could be Outer Mongolia – as long as she’s a good teacher and has an adequate broadband, it can be delivered.

“We’ve had a subject specialist based in Spain, delivering courses to Scotland for a whole year and getting pupils through their SQA exams, no problem.”

At one particular school in the Western Isles, e-Sgoil has made almost double the number of subjects available to pupils in their senior phase.

And this means that “pupils get what they want and what they enjoy… and if you get that, you get better engagement, better behaviour and better results all round.”

To hear more from Angus Maclennan about e-Sgoil’s digital education success – and its rapid response to Covid – register for Futurescot’s EduTech 2021 on June 10.

Read the full interview in Futurescot magazine, published in The Times Scotland on Saturday, June 26.