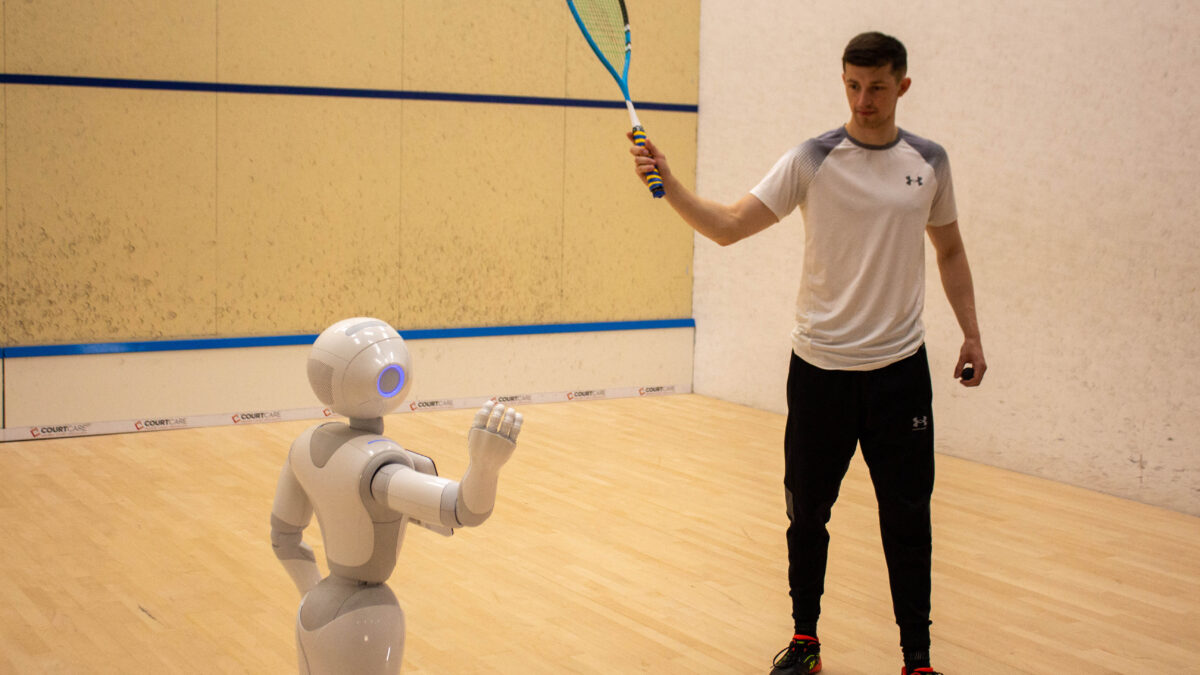 The world’s first robotic squash coach is stopping players’ motivation from hitting a wall, in a project led by Scottish scientists.

The groundbreaking National Robotarium experiment, which seeks to improve motivation and performance during solo practice, will involve research on court between an athlete, a motion-tracking sensor and a robot.

The player will practice a variety of shots, the motion-tracking sensor attached to the squash racket will monitor swings and speeds of hitting the ball, and a robot receiving this data will interpret what coaching feedback to provide.

The National Robotarium, hosted by Heriot-Watt University, is a research facility part of the Data-Driven Innovation initiative.

It is supported by £21 million from the UK Government and £1.4m from the Scottish Government through the £1.3 billion Edinburgh and South East Scotland City Region Deal – a 15-year investment programme jointly funded by both governments and regional partners.

The robotic coaching project will be delivered in collaboration with industry partner RacketWare, the company which develops the motion tracking sensors that are being used in the experiment.

From observing one-to-one training sessions between real coaches and players, 12 coaching strategies have been developed.

Based on the sensor’s data, the coaching strategy programming will enable the robot to give instructions about what the player should practice next, using hints and tips and positive reinforcement. It is hoped this will imitate a live coaching experience.

Martin Ross from Heriot-Watt University said: “We want to discover if robotics can complement and support the activities of a human coach, bridging the gap between in person coaching sessions when an individual sportsperson is conducting solo practice.

“Robots have been used in other sports, but we believe this is a world first for squash coaching. We are looking forward to sharing results on whether a robot can improve different aspects of a player’s game and increase their motivation for solo practice.

“This is particularly relevant during recent lockdown periods as indoor coaching was suspended. Additionally, we are observing the human response to a robot coach, assessing whether machine-led coaching strategies and words of encouragement are accurately timed and positively received.”

UK Government Minister for Scotland Iain Stewart said: “This is a superb example of how robots can help us improve our learning in different areas of our daily lives. Innovations like this mean more and more people are able to access support for their health and wellbeing.

“The UK Government is investing £290 million in Data Driven Innovation in Scotland as part of its £1.5 billion City Region and Growth Deals commitment, helping communities to build back better from the pandemic.”

Dr Paul Mellor, founding director of Racketware, added: “Solo practice is typically used by professional level players and committed rank amateurs.  Research shows that it increases the skill and motivation levels of all abilities of players.  A coaching session is typically £40 per session with an estimated 10-20 coaching sessions required to make progress. It’s expensive, especially if you’re committed to improving your game.

“That’s why we’re excited about this project. It has the capacity to push the frontiers of how motion sensor technology can be applied to racket sports and explore the area of robotic coaching with motion sensor data to develop products, like ours, that make squash coaching accessible to more people.”

Professor Lynne Baillie, who supervised the project at the National Robotarium, said: “This project will contribute to our understanding about the value humanoid robots can bring to enhance the sports performance and motivation levels of squash players.

“Students studying with the National Robotarium have the opportunity to apply their knowledge to real-world problems, working on new innovations through industry-led partnerships like this. As well as accelerating their skills, their research is actively shaping the future of the field.”

Paul Bell from Scottish Squash, the national governing body for the sport in Scotland, said:  “Historically, squash has been slow to embrace technology. However there have been some exciting advances in its use in the sport recently which we have fully embraced at Scottish Squash.

“This is an exciting new project that has the potential to offer some great insight into how robotics might help improve the performance of squash players in solo practice, an activity usually reserved for extra motivated players who are looking to explore every opportunity to improve their game.  We know that solo practice offers great benefits to squash players so if the use of a robot coach can motivate more players to try it then it will be a great thing for the sport in Scotland.

“The work that Martin has done exploring coaching practice in one to one sessions with Scottish coaches has already offered valuable insight for us to use within our coaching development work and we are excited to see what more can be learnt from the project moving forwards.”

Testing started in July at Oriam, Scotland’s national performance centre for sport, based at Heriot-Watt University’s Riccarton campus in Edinburgh.  The project will be completed in March 2022.