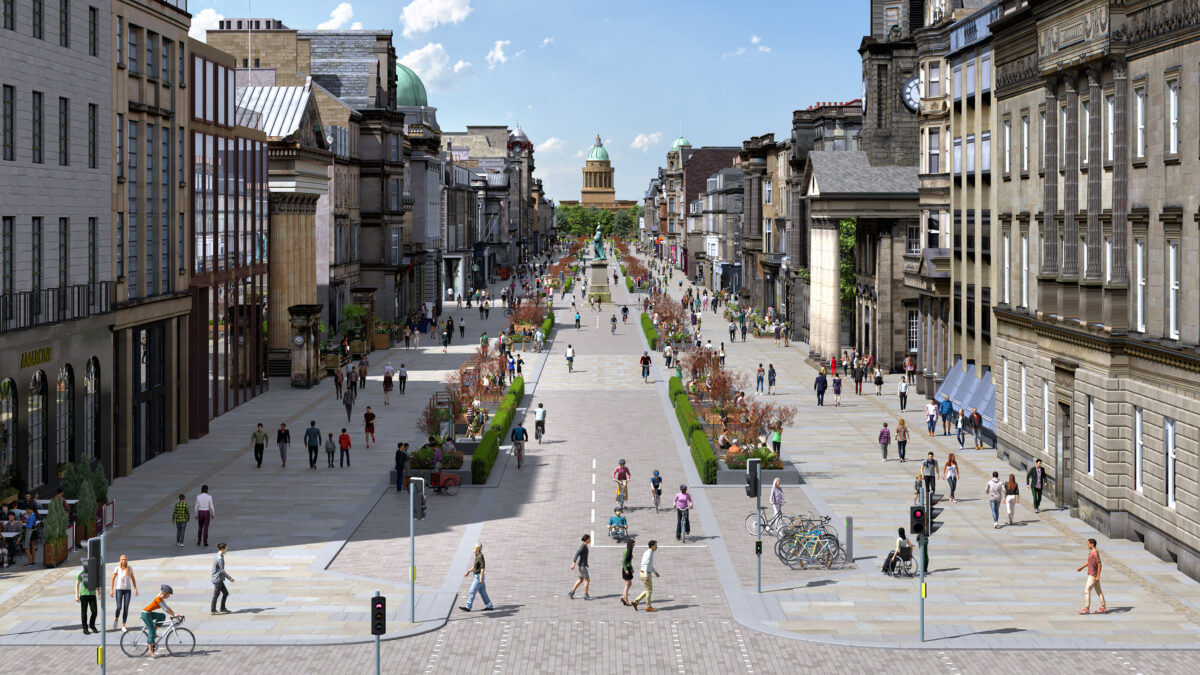 Core elements of an ambitious vision to transform Edinburgh into a more attractive and people-friendly city have been published by council planners.

A concept design for the project, which aims to create better walking, cycling and wheelchair routes in George Street and New Town (GNT), was unveiled by Edinburgh City Council in February.

These include wider pavements on both sides of George Street, ‘greening’ and landscaping sensitive to the area’s heritage and the creation of a ‘cycling street’.

Fundamental design elements also encompass the removal of buses and all other non-essential traffic from George Street, in line with the City Mobility Plan, as well as a reduction in parking bays to free up space for walking, cycling and wheeling.

A series of proposed operational changes would support the area’s transformation and will form the basis of the development of the statutory notice process which is required to enable construction of the scheme.

There will be further development of the operational plan during the next design stage of the project, beginning in September. Proposed operational principles will be finalised in partnership with key stakeholders, local businesses and residents.

Key principles of the operational plan cover the delivery of pedestrian and cycling priority, the prioritisation of blue badge parking and removing all but essential motor traffic from George Street, amongst other operational changes.

Councillor Lesley Macinnes, transport and environment convener, said: “We’ve reached a key stage as we move forward with this major project to transform George Street and the surrounding areas. These fundamental elements for the design and operation of the scheme will be central to its realisation over the coming years.

“This is exactly the kind of transformational change we want to effect in Edinburgh. Not only will wider pavements, significantly improved cycling infrastructure and relaxed, landscaped areas in-keeping with the historic surroundings create a safer, welcoming environment for people to spend time in, but it will support travel by foot, bike or wheel. Facilitating sustainable transport is crucial if we are to meet our zero carbon goals and improve air quality for future generations.”

Councillor Karen Doran, transport and environment vice convener, said: “We’ve worked hard to involve the community, businesses and active travel, accessibility and heritage groups in the development of these plans, and their feedback has been essential.

“Now, as we progress further, we want to continue to bring all those who have contributed with us, and we’ll continue to engage with them as we take the next, exciting steps towards the project’s delivery.”

The project is a key component of the Edinburgh City Centre Transformation (ECCT) strategy and delivery plan and its formation follows years of engagement and development with the community, businesses and other stakeholders. This included a year-long trial in 2014 and 2015.

Its delivery will be closely linked with other major active travel schemes planned for the city centre, namely Meadows to George Street (MGS) and City Centre West to East Link (CCWEL).

In addition, it aligns with the recently approved City Mobility Plan (CMP), which targets a redesign of the bus network by 2025, based on the ‘to not through’ principle, and a car-free city centre by 2030.

During the next design stage for GNT it is expected that sufficient detail will emerge from the design process to enable the commencement of the necessary statutory consents by the end of 2021, under which the power to construct the scheme would be obtained.

The project is being supported by funding of up to £20 million secured from the Sustrans Places for Everyone programme, with 100 per cent of design costs and 70 per cent of construction costs covered by the grant award.

Watch discussion of the report by Transport and Environment Committee live from 10am on Thursday, 19 August via webcast.