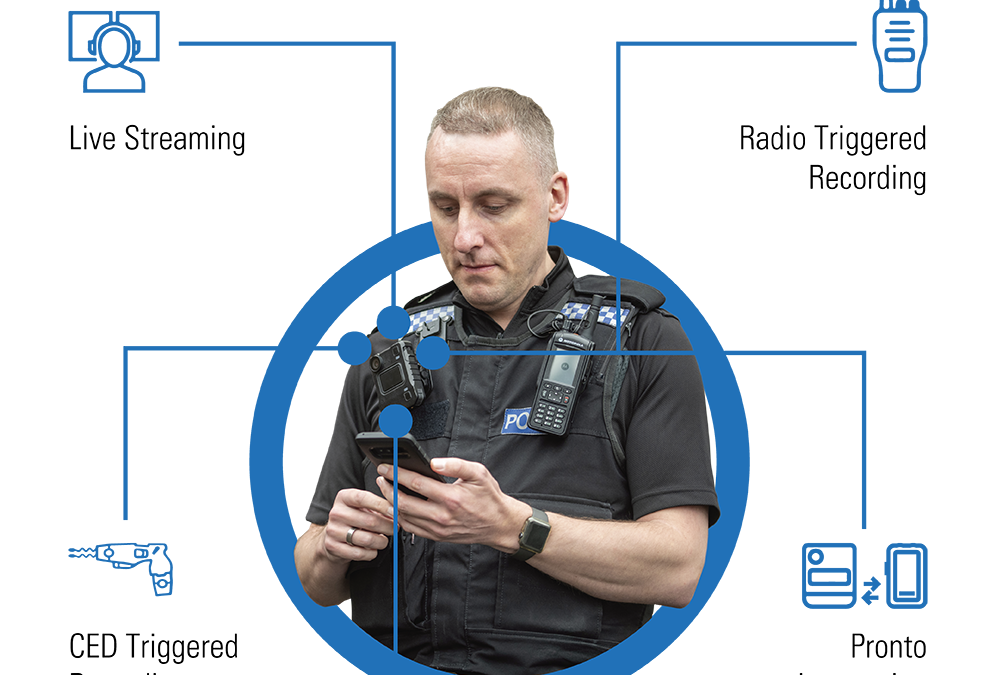 Critical connections on the beat

What seemed to be a trivial incident mere seconds ago is escalating rapidly. An attending police officer presses the emergency button on their radio to summon backup from nearby colleagues.

This instinctive action starts recording on the officer’s bodyworn camera via Bluetooth connectivity, while simultaneously streaming live footage from the scene back to the control room.

At the same time, recording is automatically triggered on other officers’ cameras in the immediate vicinity, helping capture a clear picture of the unfolding incident from multiple viewpoints.

Officers at a separate incident have determined that the tactical use of a conducted energy device
(CED) is necessary to reduce the threat of harm posed by the suspect, to themselves, police staff and the public.

As the CED is withdrawn from its holster, video recording starts automatically on the officer’s body-worn camera – capturing crucial evidence that will later be used in court to support a successful prosecution.

Withdrawal of the same device could also trigger the automatic generation of a “use of force” form, auto-populating location, incident and officer specific details such as training to justify use of the CED in that specific situation and assist with future oversight of appropriate procedures.

The idea of the Connected Officer has been enabled by a convergence between wireless video and short-range communication technologies to benefit law enforcement workflows.

“By connecting and automating disparate processes we can save precious time at the scene of an incident, improve officers’ task performance in dynamic situations and contribute to better outcomes for frontline staff and the public at large.”

Once that video has been captured by an officer’s camera at the scene, innovation by Motorola Solutions also saves time for police staff and reduces the possibility of manual error by linking that footage to relevant back-office systems and resources – before an officer has even returned to base.

The officer’s smartphone running the Pronto digital policing app is linked via Bluetooth to a companion app embedded in the VB400 body-worn camera.

An officer in the field can scroll through recorded clips on their mobile device, tagging each clip
to identify the nature of the incident – such as drugs, domestic violence or stop and search – or perhaps associating them with a specific crime number.

By linking and tagging within Pronto, officers can reduce duplication by completing this process as part of a crime reporting workflow, and at the same time eradicate errors introduced by manual entry or cut and paste between siloed systems.

At the end of their shift, officers will get a friendly reminder to tag footage. This ensures that crucial clips are not automatically deleted after 30 days, in compliance with policies for admissible evidence.

“In critical situations officers have little time to consider multiple processes other than their safety: the important thing for them is to get help on its way.

However, if that process can trigger actions that automate better evidential collection, then it can ultimately offer a better victim experience,” says Williams.

Ways to secure your hybrid workforce

What lessons can Scotland learn from the Danes?

Widening the search for tech talent in Scotland

Chris Hughes was a dyslexic student at the University of Strathclyde. Now he’s a tech CEO and neurodiversity champion