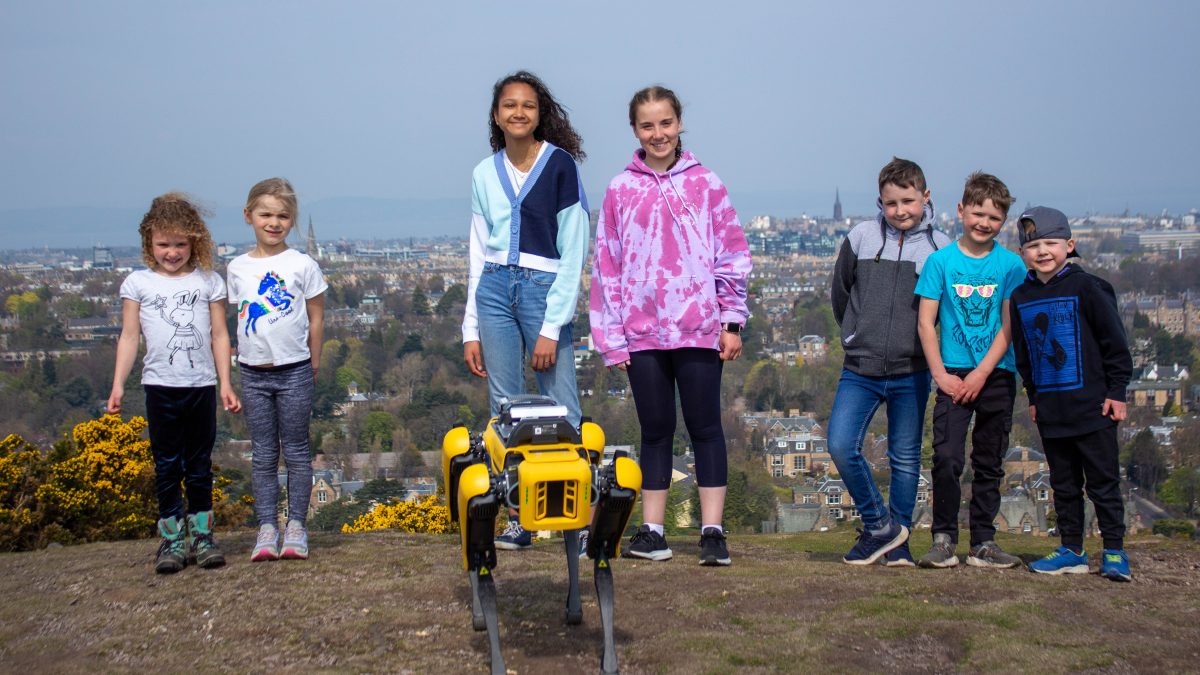 A programme to educate young people about robotics and artificial intelligence (AI) has been launched by an Edinburgh-based consortium dedicated to researching autonomous systems.

It aims to build future skills and encourage more young people from a wider range of backgrounds to consider a robotics career.

The National Robotarium is a partnership between Heriot-Watt University and the University of Edinburgh.

The name ‘M.A.R.T.I.N.’, submitted by the P6/P7 class at Aberlady Primary School near Edinburgh, was crowned the winner. The acronym stands for Mechanical, Artificial, Remote, Technological, Intelligent, Ninja.

Chosen by guest judge and BBC science journalist and broadcaster Vivienne Parry because of its ability to inspire discussions surrounding the fundamentals of robotics, M.A.R.T.I.N. has since been joined at the National Robotarium by a second robot dog with a mechanical arm.

Aptly named MA.R.T.I.N.A. with the final ‘A’ acknowledging its robotic arm, the two robot dogs have been fitted with specially created hardware to carry out research into how robots can support humans in offshore energy inspection, construction and disaster recovery.

Two drawings won the design competition. ‘Fire Bot’ by Cole Paterson, aged 10, and ‘Care Taker Bot’ by Sophie McGinty, aged 8, were chosen because of their detailed robot features that enabled their creations to help people and to solve global challenges, mirroring the objectives of the National Robotarium.

The National Robotarium is part of the Data-Driven Innovation initiative and is supported by £21 million from the UK Government and £1.4 million from the Scottish Government through the £1.3 billion Edinburgh and South East Scotland City Region Deal – a 15 year investment programme jointly funded by both governments and regional partners.

Professor Petillot, co-academic lead of the National Robotarium and director of the ORCA Hub, said: “The National Robotarium is keen to engage as many young people as possible in AI and robotics research to inspire the scientists of the future. The enthusiasm the pupils have shown in taking part in this competition is fantastic as it proves how much interest there is in robots. I’m excited to see how the next generation will embrace technology and evolve it with the new ideas they will bring to the field.”

Iain Stewart, UK Government minister for Scotland, said: “Robotics is an area with tremendous potential to help us all live healthier, safer, more prosperous lives.  Our children stand to benefit the most, and engaging them early in this cutting-edge sector is essential to ensuring Scotland is at the forefront of this revolution.

“The UK Government is supporting the Robotarium with £21 million as part of our £1.7 billion investment in levelling-up communities right across Scotland.”

Richard Lochhead, employment minister at the Scottish Government said: “Automation, robotics and wider technological advances will have a significant impact on the labour market and the demand for skills will change as our businesses adapt. It’s crucial our young people are able to take advantage of these opportunities in the future as we build on our growing reputation for hi-tech industries.

“The Scottish Government is providing £1.4 million to support the Robotarium. Ensuring Scotland has a skilled and productive workforce, both now and in future, is central to our ambitions for our economy.

“We want to ensure our people and businesses have the skills to be successful in the rapidly evolving world of work.”

Lottie Bradley, aged 12, a pupil from Aberlady primary school, said: “The robots are really interesting. It’s amazing to have these robots to help make everyone safer, because people won’t have to go into dangerous situations. It would also make work a lot more fun if you could get to control a robot.”

Judge Vivienne Parry, BBC science journalist and broadcaster said: “For us now, robots are extraordinary.  But for those in school today they will be normal and part of both their work and play.  It’s essential that these young people are equipped for this future so that they can develop robotics to its full potential.”

Over 7,000 schoolchildren across Britain take part in BIMA ‘Digital Day’