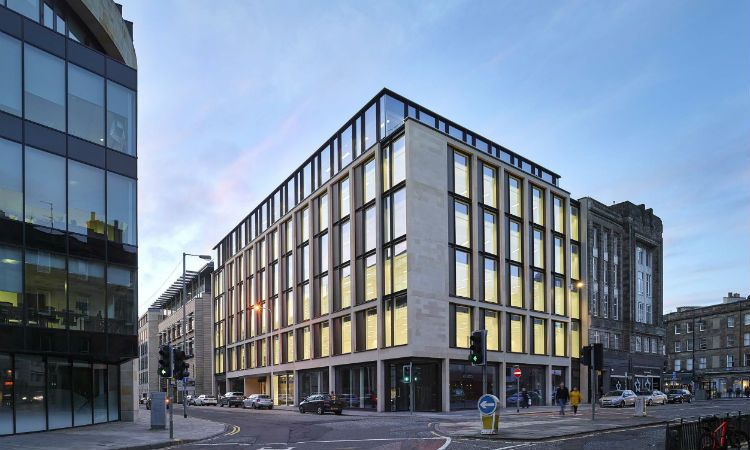 Kevin O'Sullivan, January 30, 2020 3 min read
Huawei is set to open its debut office in Scotland according to property industry insiders. The Chinese telecoms giant will occupy space at a plush office block on Semple Street in Edinburgh, according to real estate advisers familiar with the deal. The company, which received the green light two days ago to be given a “limited role” in the UK Government’s 5G network, despite ongoing security concerns, has put pen to paper on a deal to take a floor-and-a-half of space at the new building, through the developer GSS Developments. Although the major parties advising on the deal – property management firms CBRE and Cuthbert White – were unable to officially comment without approval from Huawei, the details contained in a report by property industry trade news title, React News, were described by sources as “accurate”. In that report, it is stated that Huawei will take ‘10,000 sq ft of Grade A office space… signed at just above £35 per sq ft’; it is not known what period the lease would extend to although using standard industry calculations, a five-year lease would be worth around £1.75m in commercial rent and 10 years £3.5m. Similarly, it is not yet known how many staff will occupy the amount of floor space taken by the company, which opened an office in Manchester last year – at the Blue Tower building at MediaCityUK – albeit with a smaller 4,000 sq ft presence, creating an anticipated 50 roles. When plans were first revealed by developers in 2016, 2 Semple Street was advertised as premises over five floors which could ‘accommodate up to 350 employees and may attract the attention of accountancy and legal firms or Edinburgh’s vibrant technology sector.’ The square footage taken in Scotland’s capital means the company would have space for around an estimated 100 staff, which could mean a larger presence than in Manchester. The move could provoke concern among senior Scottish politicians, given the controversy surrounding Huawei’s involvement in the UK’s planned 5G network, which will be the backbone of the next generation of mobile internet connectivity. On Tuesday, First Minister Nicola Sturgeon told Sky News that there were “very big, and very real security concerns” around the project, adding: “Obviously I am not privy to all of the information that the UK Government has, but I think we have to act very much in a precautionary basis when we are building digital infrastructure, to make sure that we are doing that in a robust way that has security very much at its heart.” Prime Minister Boris Johnson granted the Chinese company a “limited role” in the delivery of the 5G network, specifying that it will not be allowed to supply equipment to “sensitive parts” of the network, known as the ‘core’; in addition, it would only be able to supply up to 35% of the kit involved in the network’s periphery, which includes radio masts. The UK Government’s decision is in sharp contrast to the stance taken by the US, which banned Huawei entirely from government contracts in August last year; the US and the UK are both among the ‘five eyes’ security partner nations, which have a shared intelligence network, and close cooperation between national spy agencies. In Scotland, Huawei has forged close partnerships in academia and with the national police force, Police Scotland; it works with Edinburgh and Napier Universities, who have teaching and research partnerships with the firm, and Police Scotland, which uses the company’s broadband devices. The company agreed a three-year partnership deal with Edinburgh University in 2018, which led to the opening of a lab for distributed data management and processing, based at the University’s School of Informatics. Although the facts of the story were confirmed by FutureScot – through conversations with the parties involved in the deal – official comment is subject to approval Huawei.
Previous

UK's cyber security industry worth £8.3bn according to government report

Technology recruitment: Why speed is of the essence