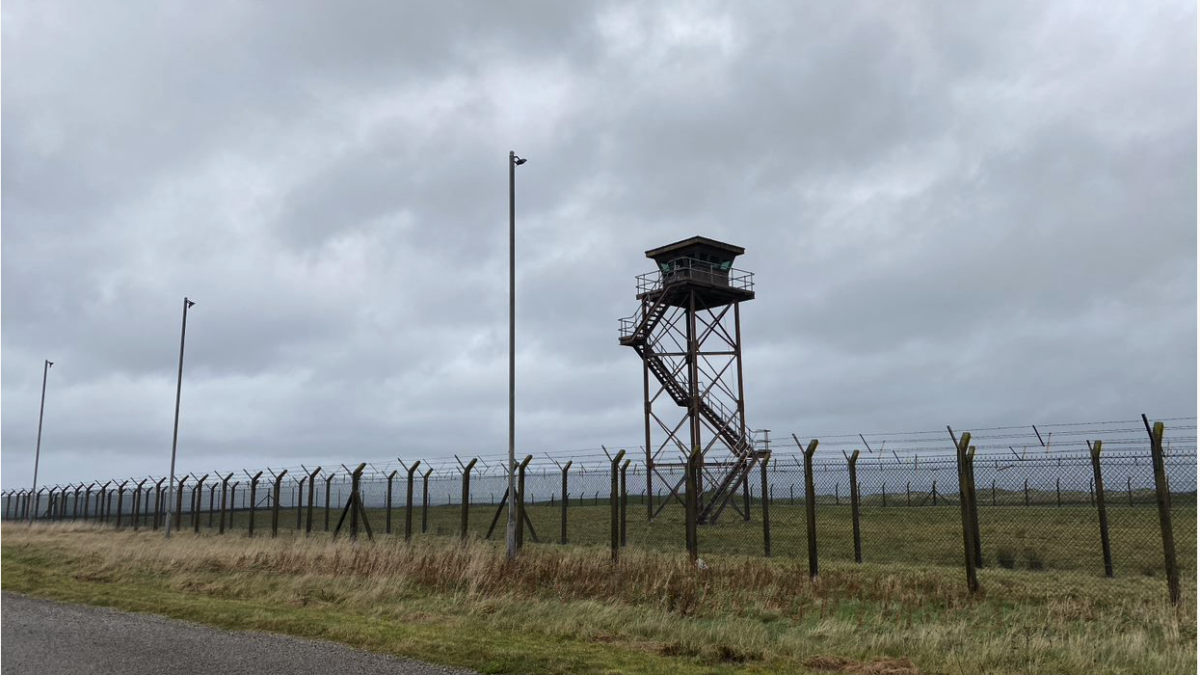 With underground bunkers, watchtowers and Europe’s longest runway, it’s little wonder why some
online forums describe it as Scotland’s version of Area 51. But the former RAF base Machrihanish
in Kintyre could soon house something other than special operations stealth bombers, and reputedly
NASA aircraft.

The secretive military installation, which was used by the US military at the height of the Cold War, is one of a dozen sites selected to host a legion of ‘green datacentres’ powering the tech sector.

Partly occupied by the tiny Campbelltown airport, the sprawling and once heavily fortified site has been described in a scoping document as a ‘strategic’ datacentre location which, with its proximity to Portrush in Northern Ireland and Killala in Ireland, would offer an ‘inexpensive new subsea connection to Ireland and the USA’.

With Amazon building a wind farm adjacent, and an existing solar farm with ‘ample room for expansion’,
the facility would also potentially be able to access plentiful sources of local green, clean energy.

The plans are outlined in a site selection report commissioned last year by Host in Scotland, an organisation set up by the government infrastructure agency Scottish Futures Trust to attract international datacentre organisations – including the likes of Amazon Web Services, as well as dedicated specialists such as NTT or Equinex – to invest in Scotland.

And they’re not just on a whim. According to commercial real estate giant Jones Lang LaSalle, the European datacentre industry is predicted to grow by a third this year alone, driven by a pandemic-fuelled migration to cloud services during 2020, which makes the work carried out by datacentre consultants TechRe, on behalf of Host in Scotland, so timely.

“The demand is soaring,” says James King, chair of Host in Scotland. “And if we play our cards right, we are sitting on a massive opportunity here.” King, an ebullient Northern Irishman, admits he first discovered datacentres “by accident”. He had joined SFT 10 years ago from the private sector – where he’d been a director at business consulting firm PwC – and started to look into digital connectivity projects.

He realised quickly that Scotland didn’t – and still doesn’t – have much of a datacentre industry compared to the likes of Ireland, where the tech sector has been able to ride the Celtic Tiger through a combination of historic links to the US – and because it’s the first country cables hit when traversing the Atlantic.

“I basically borrowed the Host in Ireland name,” says King, laughing. “But in all seriousness, Ireland benefited enormously in connectivity terms when the likes of IBM came in 60 years ago. So, the subsea
cables that were laid back then are still crucial to its ongoing success.”

King did further research and worked out that Ireland’s vast network of datacentres consume over 900 megawatts of energy, whilst Scotland’s market is around one sixtieth of that figure. Ireland is not only able to provide ‘low latency’ (a computing term for delay) data services for its own economic needs, but it also acts as a net exporter of data. King also highlights the fact Scotland relies on connectivity through internet exchanges in London, Paris and Amsterdam, which results in lag times for data intensive industries.

King says: “If you look at fintech (financial technology), which is a really fast-growing sector, and just the financial industry more generally, you need that ultra-low latency through dedicated dark fibre to do the high-volume trades, you need to be the first mover or you miss it, so fractions of milliseconds really
matter.”

The vision for Scotland’s data future was set out in a government action plan published in March, which highlighted the need and opportunity for enhanced international connectivity and datacentres powered by renewable energy. With a quarter of Europe’s offshore wind energy potential surrounding Scotland’s coastline, the TechRe report is a statement of intent to a highly competitive market increasingly looking to reduce the massive reliance on fossil fuel power.

King is clear that this “collateral” is helping him make the case to datacentre operators – and investors – directly, through a series of online events during lockdown. Whilst he hasn’t been able to network in the traditional sense, there has been a lot of interest in the TechRe report, which has been downloaded by companies “from California to Japan”.

King can’t talk about some of the pipeline projects (due to non-disclosure agreements), but it’s clear that the talks are in some cases advanced. Indeed, just last month Stellium Data Centres established a new Scotland office in Aberdeen as part of its growth strategy for the UK.

He adds: “What we have here is the renewables story, and that is critical to the datacentre industry, which must decarbonise. The current business model for datacentres globally is based on extremely
intensive energy requirements. Some of the hyperscale datacentres consume as much energy – if not more – than entire cities. With the implications of climate change, we cannot carry on burning fossil fuels
to meet that demand.”

As well as the green agenda – and the drive to build datacentres that are self-sustaining in energy terms – there is also an increasing desire to co-locate them with other industries. In the Netherlands, Agriport A7 has demonstrated how the waste heat produced by a datacentre can be pumped into a greenhouse growing flowers, fruit and vegetables next door; in Norway heat at the Green Mountain hydro-powered datacentre is used to warm up a nearby reservoir, increasing salmon and trout farm yields. King calls it the “circular economy” effect, which minimises waste, and insists that – whilst the obvious aim is to remove waste altogether – Scotland should at least be starting to follow these examples.

“We’re looking at the best in class and seeing how that can be applied in Scotland, because we also have those traditional farming and maritime industries and growing concern about sustainability and debate over food miles,” he adds.

Another consideration is the shift towards so-called ‘edge computing’, whereby datacentres are increasingly being developed on a smaller, more local scale. As more organisations move to the cloud – and start to use data-intensive technologies such as artificial intelligence and autonomous transport systems – the current hyperscale datacentres, which are massive, remote facilities do not provide the low latency required to run such systems efficiently.

It is significant, then, that TechRe was recently asked to revisit the fieldwork they undertook last summer, where a longlist of over 100 sites was whittled down to 38 and then 12. That revision is shortly to be produced and will include island locations in the Hebrides and Orkney they were unable to visit due to Covid restrictions.

One particular project with Microsoft in Orkney has been a noteworthy success, where the tech giant sunk a datacentre underwater. The submerged racks, King explains, were almost too successful as it required almost no human intervention, and the cold depths of Orcadian waters meant the facility also needed virtually no energy to cool down. “It was almost too perfect, ironically,” he adds. “Part of the drive for the strategy is to create jobs.”

In that respect places like the formercoal-fired power station at Cockenzie, East Lothian and Hunterston B, the soon to be decommissioned nuclear power station in North Ayrshire, are among attractive options listed in the prospectus, as the areas retain a high number of people skilled in engineering roles, who can be retrained in the management of datacentres.

King adds: “These places are also located in coastal or rural areas where there is a need for regeneration and economic growth. If you can bring datacentres to these parts of the country it will inevitably create a clustering effect for local tech companies who may not previously have had much incentive to stay in the area.”

Whether all this work pays off remains to be seen. But the signs are promising. “Renewables are our master stroke in all this,” says King. “Other countries simply cannot build the generation facilities quickly enough to satisfy the demand. We already have them, we now just need to convert the opportunities.”