Home > Education & Skills > Meet Marty: he can walk and dance – and teach you coding 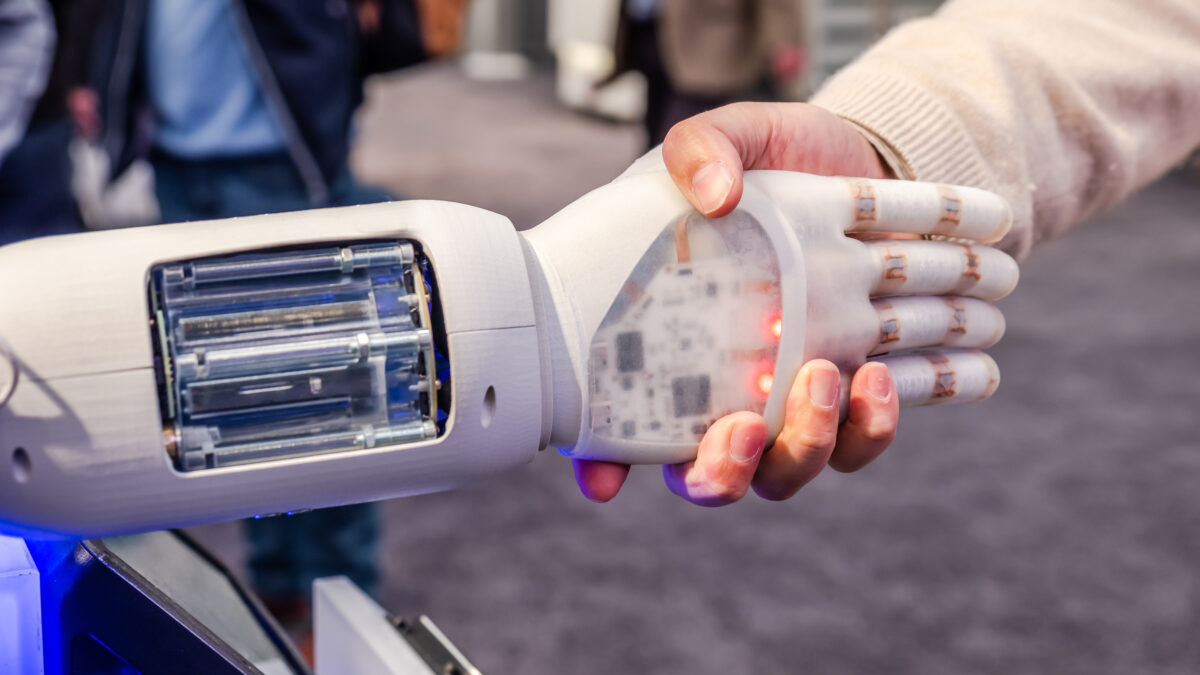 It’s hard not to have a soft spot for inventors. Especially one who churns out bits of moulded plastic through a 3D printer, adds springs and coils and tiny little electronic components, to eventually assemble a charming little robot, who can walk. And even dance.

You might even say that Alexander Enoch, its creator, is a bit of a modern day Gepetto as he toils away in his workshop putting together his lovingly assembled droid, called Marty. With his flying saucer eyes, and cartoonish head, it’s hard to see how Marty could be anything other than an instant hit with kids. But there is something else lurking behind the characterful exterior of Enoch’s creation: Marty is fully programmable.

He has a brain that the user – if they familiarise themselves with a bit of entry-level code – can instruct to do things.

“It comes as a kit that you can build,” says Enoch, who has a PhD in ‘walking robots’ from Edinburgh University.

“And it’s also got wi-fi so you can play with it like a remote control toy. But then, when you want to, you can start to programme it in a few different coding languages. Scratch is the really easy one. It’s just a bunch of blocks that you click and drag together to make a programme, but it’s got all the concepts of programming in there so it’s a nice way to get stuck in. And then when you’re ready you can start on full
programming languages like Python or C++. You can do all this via an app.”

Programmable toys are now all the rage as the global trend for making so-called STEM (science, technology, engineering and maths) subjects more accessible to kids gathers pace. As educators face up to the challenge of making mathematics – through coding – more interactive, and enjoyable, a raft of new products has entered a market that is predicted to grow from $1bn to $2bn by 2020, according to analysts Markets and Markets.

And it’s fair to say the impact of programmable toys went intergalactic last year when Star Wars: The Force Awakens featured a Sphero, in the form of the droid, BB-8.

Enoch’s company, Robotical, still has some way to go to crack the market itself. But as a start-up, the signs have been positive thus far: at the recent EIE Investor Showcase in Edinburgh, the company attracted a considerable amount of interest from investors.

When I catch up with Enoch after the event, he tells me that he had about seven or eight initial expressions of interest and there were around three very serious contenders to invest in the project. Robotical has also just secured a £60,000 investment at the recent Scottish Edge funding competition, and has raised just under £20,000 of a £50,000 target on crowdfunding site IndieGogo.

“It’s all so we can get the product ready for market,” says Enoch. “Ideally, I’d like to raise around £200,000 although some are saying that £150,000 would be the level as that’s where the Seed Enterprise Investment Scheme kicks in. That’s the level where you have tax breaks for investment. But that’s ok, I can work with that.”

Enoch himself has a fellowship at the Royal Academy of Engineering, and is aged just 30. He is a scientist through and through, but after running out of money to complete his PhD he took a job as a trainee patent attorney to try and fund the rest of his studies.

“That was good but wasn’t for me,” he says candidly. “I found myself when we had inventors in and we were speaking to them, as they were writing a patent application, I was wishing that I was the other side of the table, being the inventor. So that was one of the things that spurred me on to go and start up the company.”

Whilst admitting not all aspects of business come easy to him, it’s clear he has set about entrepreneurship in the right spirit. Aided by some business mentors – acquired through Edinburgh Research & Innovation – Enoch’s endeavours have already been featured on the BBC and in the national media, all without much of a budget at all. He has done much of the online marketing himself, but is seeking to add to his staff so he can focus on what he is naturally good at: product development. Amidst all the frenzied activities of a start-up, as well as seeking the right distributors, he is also interested in tak- ing Marty into a physical store.

I tell him that I could see the robot, which is priced at £100 on the crowd-funding site, but may well sell for less if Enoch can drive the manufacturing costs down, in a store such as John Lewis. You can imagine a programmable robot being a hit not just with kids, but with parents who are keen on trying to teach their offspring computing fundamentals almost by stealth.

“I think it’s the perfect spot for that kind of market,” says Enoch. “It might just walk off the shelves.”
One thing Enoch is acutely aware of, he tells me, is the issue of positioning an educational toy in the market.

“The positioning is a tricky one,” he adds. “If we can get the right distributors and follow the same route as the Raspberry Pi that would probably be a good way to go.

“I think if we were to go with toy shops it would be next to the Lego or the more technical toys. I’d like to try putting it in different schools to try and prove the educational credentials but it’s very much trying to market it as a consumer product. There’s a fine line to be trod there, I think.”

Unlike some products Enoch is also keen to involve a community of buyers in further developing and enhancing it. He is happy to release Marty’s design files online, so anyone who has access to a 3D printer can manufacture new components, and potentially add sensors. “I’d like to see people be able to customise it and see what they can make,” he adds. “That would be very cool. It would be the equivalent of an app store where people can share what they make. Robotics is a nice way to get into the very different aspects of science and engineering. “

As for the future, once Marty is successfully brought to market, Enoch would like to develop further ideas. His inventor spirit is irrepressible, but when I ask what kinds of creations he’s thinking of next, he’s understandably a bit reluctant to reveal his next big idea. However, as we amuse ourselves talking about the next generation of robots – which he thinks will “explode” in the next 10 years – he suggests that consumer and service robotics will probably be the focus of most manufacturers.

“These things are now coming of age and they don’t look like the traditional big, bulky household robot,” he says. “They’re a probably a few years down the line but I think one of most useful would be a sous chef, because that’s what takes the most amount of time, all the prepping of the veg.”

“We’re just concentrating on getting this product done, and done well,” he stresses. “But in future I envisage we will do other products and branch out from educational toys. If all goes well we’ll be building up a company with a lot of expertise and we can move into those areas.”

Scotland has the right mix for digital health and care