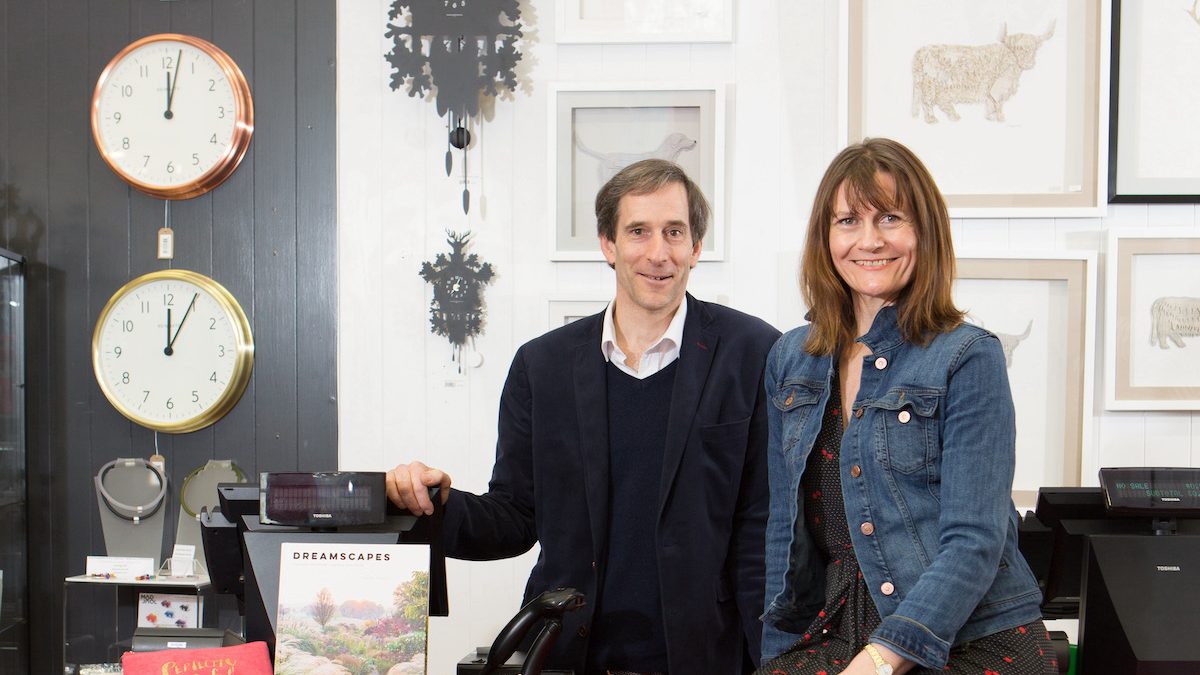 Every time he gets a ping, William Crawford checks his phone and takes a moment to register another sale.

For all the terrible economic and social consequences of the pandemic, there are some for whom the internet has proved a lifeline.

Running a small local business 15 miles from Inverness, William and his wife Helen’s gift shop has seen web sales increase by 415% during a year impacted by lockdowns.

The businessman, who runs the Old School Beauly village shop, says it has been the couple’s “most profitable year” as an investment in a Shopify platform four years ago has more than returned its investment.

“It’s been just incredible; the level of interest has been hard to believe,” he says. “Pre-pandemic we were doing not even one per cent of turnover in web sales, but that has just skyrocketed.

“When the pandemic began we had maybe around 3,000 products on our website, out of 18,000 products overall that were in our range. We worked flat out as lockdown began to get as many of those on the website. In the first week we were working from 4am to 10pm every night to get as much as we could on the site. It’s made such a big difference to our business.”

As lockdown gathered pace, the Crawfords’ popular tourist gift shop – which stocks high-end products from gold jewellery to clothing, as well as the trinkets you might expect – began to resemble a warehouse, as the orders mounted up. And now every time a sale is made online, William gets a ping notification synced directly to his smartphone.

“We spent all our time packing and posting,” he adds. “We even started to hand write people’s cards; it was a weird feeling writing ‘I love you’, or ‘I miss you’ on someone else’s card, but it proved a really popular service and we started to see a network marketing effect; people who had gifts sent to them would also place an order.”

The couple had also invested their time and energy in a search engine optimisation (SEO) course with Business Gateway, and Helen spends a lot of her time building an online audience via social media.

William contrasts this with some businesses he knows who have “really struggled” because they have not had a web presence. He mentions one business he knows which has been conducting Zoom tours of its shop with customers. “All just to sell something for twenty quid,” he says.

Although turnover has not been as high as a ‘normal’ year, the fact that the shop has been closed for long periods – although in between lockdowns it was “really busy” – has meant there have been fewer overheads in terms of staff costs and also reduced heating and lighting bills.

And reducing the cost of postage and packing has also helped generate interest in online sales as “people really don’t like paying for postage”, according to William. In terms of customer base, 82% of orders are from the UK, with 10% from the US, 1.6% from Germany, 1.5% from Australia, 1.5% from Canada and 3.4% from ‘everywhere else’.

According to the Federation of Small Businesses Scotland, a survey of almost 800 Scottish businesses has revealed that a fifth say that the coronavirus outbreak has led to them adopting new digital technologies. Its findings revealed:

Colin Borland, Director of Devolved Nations, Federation of Small Businesses, said: “The pandemic underlined that necessity is the mother of invention. Many small firms had to find new ways of doing business in order to keep themselves afloat. For some, this might have involved accelerating plans that were already in development – for others it meant taking a big step into a totally new world. I remember last spring, one business near me, who didn’t even take credit cards until a few years ago, getting an online offer up and running in a matter of weeks.

“The challenge now is to build on these changes and maximise their value. There’s no shortage of will among the small business community – even before the pandemic, a clear majority of Scottish firms said that digital technologies were important to their plans for growth.  But to turn these ambitions into reality, businesses need access to good skills and quality infrastructure.  That’s why we need to see the next Scottish Government, through schemes like DigitalBoost, put resources into helping local firms compete with the digital giants.”