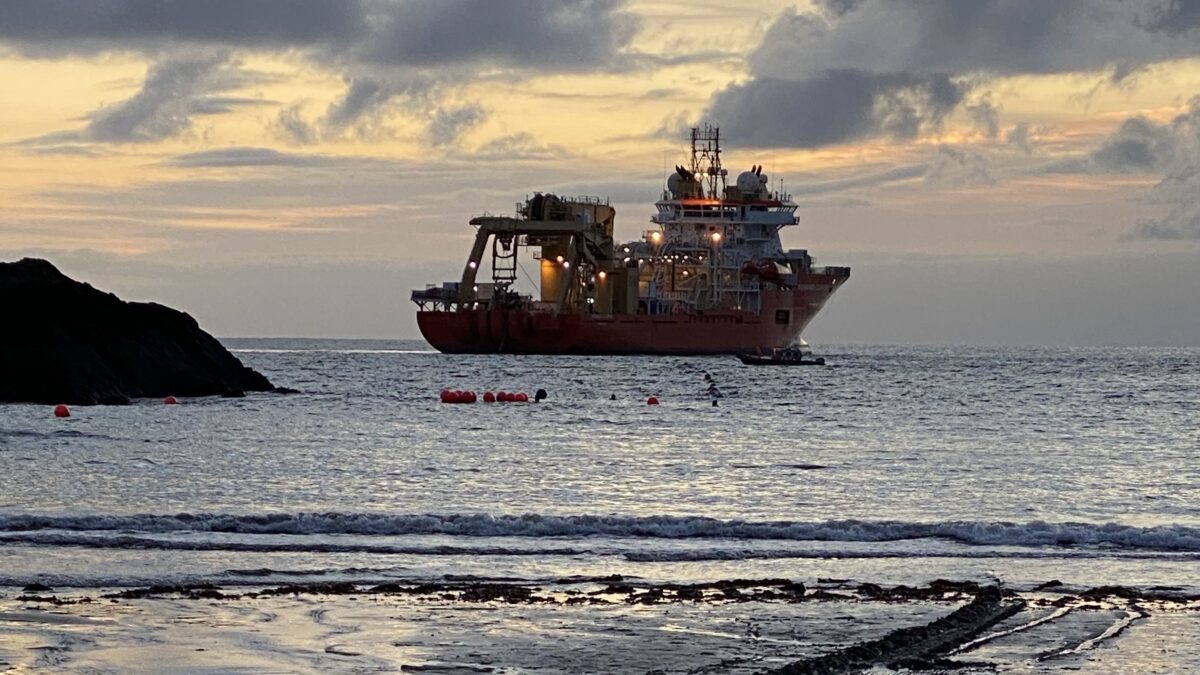 As part of the Scottish Government’s £600m Reaching 100% programme (R100) – a commitment to connect everyone in Scotland to “superfast” broadband – network giant Openreach has started work to lay 16 new subsea fibre cables.

Engineers set sail this week – heading first to Norway to collect the cables and then on to Shetland to begin the installation.

Economy secretary Kate Forbes said: “The Scottish Government and our delivery partners Openreach are providing future-proofed, fast and reliable broadband services to 15 islands across Argyll and Bute, the Highlands, Shetland and Orkney.

“Preparation of the seabed began this week for deployment of 16 new subsea fibre cables that will connect island communities via the Reaching 100% (R100) programme. This is part of the £384 million R100 North contract which will connect more than 59,000 homes and businesses across the north of Scotland and islands.

“The Normand Clipper and CS Sovereign vessels will collect subsea cables in Norway then begin installation beneath the seabed around Shetland.”

The work will improve connectivity to:

Ms Forbes added that the process is due to be completed over the summer, with 139 miles of cables implemented in total, ranging from shorter routes between the mainland and Lismore in the Inner Hebrides, to a 71 mile connection between Shetland and Sanday in Orkney.

She said: “This will deliver full fibre broadband capable of one gigabit per second download speeds, more than 30 times faster than the Scottish Government’s original superfast commitment.”

However, concerns have been raised that “not everyone” on the remote islands will be connected.

According to a Scottish Liberal Democrat, the communities of Isbister, Nisthouse and Skaw in Whalsay – the sixth largest of the Shetland islands – will “be excluded” from fibre broadband, despite Openreach’s work to lay a cable to the island.

Beatrice Wishart, an MSP for Shetland Communities, highlighted the issue at a rural affairs, islands and natural environment committee meeting at Holyrood earlier this month.

Speaking to Futurescot, she said that the issue was one of “inequity”.

She said: “Public money will be spent installing a subsea cable to Whalsay for superfast fibre broadband from which residents in Isbister, Nisthouse or Skaw will be excluded.

“This will impact daily life, as utilities increasingly move online, and limit economic growth in parts of Whalsay.

“Island communities rely on communication between the Mainland of Shetland and Scotland, limited internet capacity hinders this and does not allow for innovation such as online medical appointments.”

After informing Ms Wishart that there are “no R100 contracted properties in Isbister, Nisthouse or Skaw”, a spokesperson for the Scottish Government’s Digital Directorate revealed that bidders “designed their networks for the properties they were confident of building to with the available funding and unfortunately this hasn’t included the above communities”.

The excluded areas will be expected to rely on the Scottish Government’s broadband voucher scheme – introduced in 2020 to enable people who would not have access to superfast broadband by the end of 2021, or where there was no planned coverage, to apply for a voucher to get connected by another supplier.

But according to Ms Whishart, only nine of the 60 of the suppliers the Scottish Government signed up to the broadband voucher scheme can provide an installation in Shetland.

It comes after the Auditor General for Scotland provided an update on the Scottish Government’s R100 programme, which said that completion of infrastructure for the North contract was expected by 2026-27 – six years later than originally anticipated.

The delay is due to a legal challenge to the North contract, which meant that it was not awarded until December 2020.

The report, published in March, found that around 107,000 premises remain to be connected through the three R100 contracts. It stated: “Many of these are in the hardest to reach locations, with the majority in the North. Connecting these remaining premises, will be challenging and expensive.”

Ms Wiishart said: “It is once again disappointing news about the Scottish Government’s handling of broadband. The timetable for every household to get superfast broadband seems to be getting further and further out of reach.”

The government’s superfast broadband programme has so far reached around 951,000 premises, with the total public sector investment currently estimated to be £311m.

A Scottish Government spokesperson said: “The £600 million Reaching 100% (R100) contracts will deliver connections to more than 112,000 properties across Scotland, including over 59,000 properties in the north with more than 2,300 of those in Shetland.

“For those who will not benefit from the R100 contracts or commercial build, the R100 Scottish Broadband Voucher Scheme – offering vouchers worth up to £5,000 – will ensure they have support to secure a superfast broadband connection.”

New partnership to speed up cancer diagnosis with AI