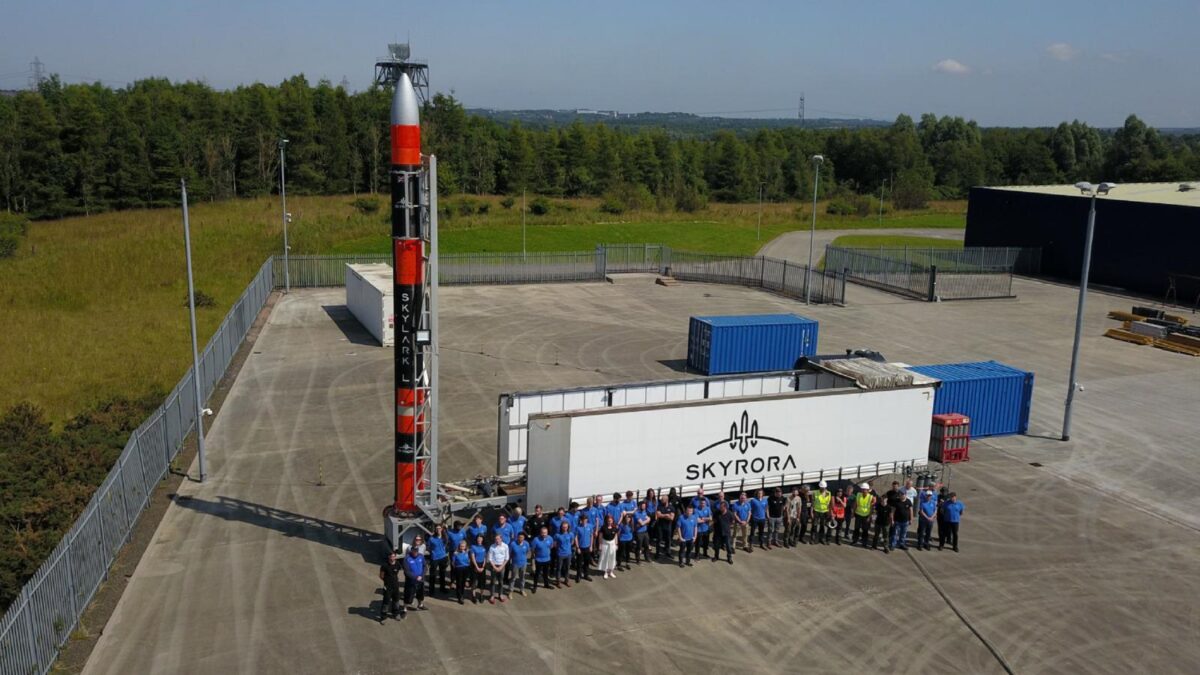 Last month, Edinburgh-headquartered space rocket company Skyrora unveiled the UK’s largest rocket engine testing facility in Midlothian – a significant milestone for the firm which is embroiled in what has become known as the new ‘space race’ to launch Europe’s first orbital mission.

It’s hard to believe that two weeks prior, all its efforts were focused on evacuating its staff from Dnipro – a city located 250 miles southeast of Kyiv, and which has recently been transformed into a hub for humanitarian aid following the Russian invasion.

Though Skyrora’s main facilities are located in Scotland and the UK, about half of its 160 staff are based in the Ukrainian city, which is home to its manufacturing techniques R&D centre.

Under the instruction of its Ukraine-born founder and chief executive, Volodymyr Levykin, the firm has been on a different kind of mission since Thursday 24 February – one which puts “family first”.

“Initially when everything first started, our immediate response was to try and evacuate as many people as we could, that were allowed to leave,” says Laura Edison, who is the legal director at Skyrora.

Though the company was unable to move its men out of the country, who were banned from leaving under the martial law, it provided buses to evacuate their wives and children.

Edison adds: “That’s something that we continue to try and do. If there are safe humanitarian corridors, then we will provide support to help move them.”

And for its staff who remain in Dnipro, Skyrora is providing financial aid to ensure they are able to stock up on essentials such as food.

“We continue to support them, speaking to them as regularly as we can – providing communications lines are still open, which they are,” Edison says. “And we have regular contact with everyone.”

Skyrora is supporting various relief efforts where it can – providing translators to those coming to Scotland, and sending medical equipment and protective gear to Ukraine.

Thankfully, the company’s facilities in Dnipro remain intact, and it continues to operate at pace, with UK staff stepping in to support their Ukrainian counterparts.

Edison, who is based in Edinburgh, says: “It has really brought the team together, because although we typically work internationally, the UK team have had to step up their involvement in assisting in typical tasks that may have been done by our Ukrainian colleagues.

“And everybody else is just pushing that little bit harder in terms of doing the day job, but also doing what they can to help personally as well as professionally, outside of working hours just to try and help the relief efforts that are going on.”

Speaking of Skyrora’s chief executive, who Edison has worked closely with as a legal advisor on his various tech ventures over the past 10 years, she says: “His attitude from the outset has always been family first.

“So once our Ukrainian staff got comfortable, once they got settled, once they’d made their plans and they were wanting to do work, then we welcomed them to do that. That was his attitude. And I think that was a really good attitude to have that really instilled that in all of us. And then that just worked through the company.”

It is personal for Levykin. Though he is a British citizen, who has lived on UK soil for 13 years, he has family of his own in Ukraine who he has been trying to move safely over the past few weeks.

Might the war slow down Skyrora’s efforts to launch an orbital mission from its Shetland spaceport by the end of this year?

Though Edison admits that there are some “key people” who “we really want to be part of that journey” that have been unable to return to work, Edison says that the shared goal of making history currently driving the teams in Ukraine and the UK means that timelines will not be disrupted.

“I don’t think it will impact us in terms of our progress on our own journey to orbit because, we have the UK team just adding to their current activities and tasks, and credit to them for spending a lot more time outside their normal working hours to pick up that extra work that needs to be done to keep us on track.

“We’re working towards such a big dream and big vision here that and it will be historical, when it happens, when we launch from the UK, and everybody really wants to be a part of that journey.”

Staff in Ukraine are “very motivated by that goal”, she says. “They desperately want to be back working when they can and when it’s safe to do so. And we will try and continue to move as many into safety as we can, including to the UK, to allow them to really be a part of that with the team here.”