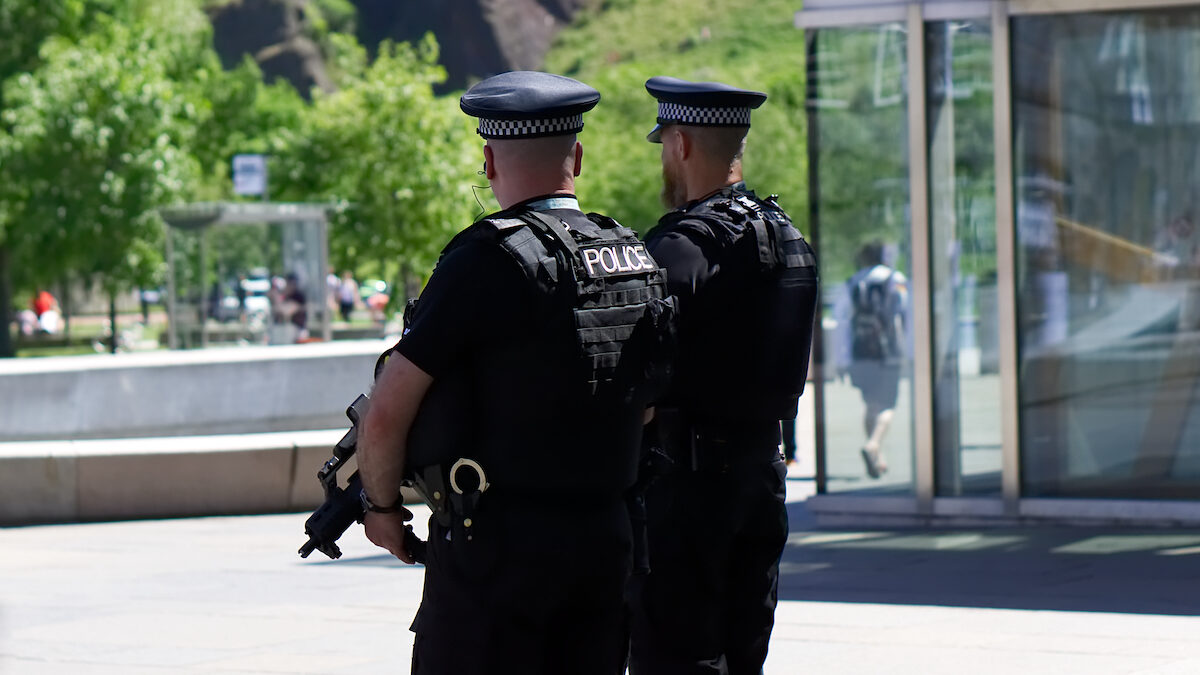 Armed officers will be kitted out with body-worn cameras ahead of Cop26. Tana888/Shutterstock.com
Editors Pick

Almost a decade since they were first used, the national rollout of body cameras could revolutionise policing

The use of body-worn cameras has transformed policing and the criminal justice system in England and Wales, where they have been in widespread use since 2016.

North of the border, it is a different story. At present, only about 250 officers in North East Scotland have access to the devices, where they were distributed after a successful Aberdeen pilot by Grampian Police in 2012. About 60 officers in the Paisley area have also been trialling the technology.

Chief Constable Iain Livingstone has now indicated that there is a “pressing, critical, ethical and operational imperative” to progress a targeted rollout of body-worn video (BWV) to Scotland’s armed officers prior to Cop26.

Police Scotland is aiming to deploy cameras to all appropriate frontline officers and staff “as quickly as funding will allow”. This would see more than 10,000 constables, sergeants and inspectors equipped.

The news has been welcomed by David Hamilton, chairman of the Scottish Police Federation, who believes that policing is entering a “digital age” and that there is now an “expectation from the public and from officers” for the force to use BWV.

He credits the climate change conference in Glasgow in November, with accelerating plans to supply the technology on a national scale.

“We are very supportive of [the rollout of BWV], because in some ways it gives us an equality of arms. Officers are constantly getting videoed now by people with mobile phones. And on occasion we have seen doctored footage, edited footage, or footage out of context that has then made it into mainstream media or social media,” he says.

The public backs BWV, too. An online survey conducted by Police Scotland in February, which had 9,000 responses, found that 90 per cent of people felt BWV should be worn by armed officers “often” or “always”.

Hamilton also believes the implementation of the chest-mounted recorders in Scotland will reduce the number of complaints against officers, which can have a negative impact on staff morale. “What we are looking for is essentially to have a sense of security from complaints and security for what the officers are doing,” he says.

A study conducted by Cambridge University found a 93 per cent decrease in complaints made against officers clearly wearing body cameras. In Grampian, Chief Superintendent Matt Richards told a parliamentary justice committee earlier this year that there had only been one complaint from a member of public about the technology in the last four years, and that officers have been using it on the basis of acquiring consent before deploying the solution.

Widespread use of BWV would also reduce delays to justice, Hamilton says. This is because camera footage can be easily presented at court as opposed to “bringing in witnesses”. The nature of video evidence mean it is also more difficult to refute and is “likely to lead to earlier pleas from those who are accused”.

Grampian Police reported that more than 90 per cent of cases it had pursued, using evidence from the cameras, resulted in guilty pleas after BWV’s first year in operation in the region.

The technology is also thought to increase public transparency and officer safety.

With evidence of strong public support and clear benefits to be reaped – why is it taking so long for Scotland to implement the cameras?

The main bone of contention is underfunding, but questions have also been asked around privacy rights.

And there are more practical issues for Police Scotland to consider, such as having the right technology in place to ensure the appropriate storage, tagging and retrieval of data captured.

A Police Scotland spokesperson said: “[BWV] has been considered for national implementation for a number of years but was deprioritised due to restrictions in capital funding.

“There are also privacy, data and third party concerns that need to identified and addressed prior to any rollout, which is why Police Scotland launched a national public consultation into BWV during the summer and is currently conducting extensive engagement with partner organisations, elected representatives and our communities.”

An independent advisory group was formed by the Scottish Government in May to ensure the use of emerging technologies in operational policing is compatible with equality and human rights legislation.

The panel of 17 experts will report to justice secretary Keith Brown in spring 2022 to advise on whether current legal or ethical frameworks need to be updated in order to ensure Police Scotland’s use of technology is lawful.

Is this good news?

“My initial fear is that it looks quite weighted towards academia, which, in my experience, doesn’t really understand policing,” says Hamilton. “I have a concern that there is perhaps not enough operational input into it. That might be an unfair concern, but I’ll wait and see what comes through from it.”

His hesitancy stems from what he calls “the cyber kiosk debate”.

Police Scotland’s rollout of cyber kiosks in January 2020 proved controversial. The specialist software system, installed on laptops, allows trained officers to plug in smartphones and scan them for digital material relevant to an inquiry.

If evidence is identified, lines of enquiry can be progressed earlier. Likewise, devices which may not be relevant to an enquiry can be returned to the owner more quickly. The information is deleted from the cyber kiosk at the end of each examination.

The force bought 41 of the machines, which it had intended to circulate to police stations across Scotland from autumn 2018, before postponing their introduction amid concerns about the legal basis for their use.

Hamilton recalls a conversation with a journalist a few years ago who was convinced cyber kiosks were devices that could be taken into public and randomly hack into nearby iPhones.

He says: “But when I explained that they simply returned devices of no evidential value to their owners faster, it was clear that his story was dead. So he chose to ignore this and instead printed a story suggesting that there was mass harvesting of data – it was just rubbish.

“Next thing, politicians reacted and it ended up before a parliamentary committee, some of whom I’m not convinced to this day yet understand what a cyber kiosk is, and more importantly, isn’t.”

The Scottish Police Authority faced criticism from the Scottish Parliament’s justice sub-committee on policing for a lack of effective scrutiny, while MSPs warned that Police Scotland had not followed best practice before trialling the devices.

Hamilton adds: “There is far too much misunderstanding of technology by those in positions of scrutiny and influence and far too little willingness to challenge them when they get it wrong. That’s not a good place to be in terms of having a grown-up conversation.”

Is he afraid BWV could go the same way?

“I think BWV will be different because it is well-established and there has been a lot of really good work being done by the service to try and reassure people. It is the other things which cause me concern… like any kind of artificial intelligence.

“Like many organisations, we are now looking at robotic process automation to help deal with repetitive administrative processes. That absolutely makes sense, but as soon as you say that phrase, people start panicking, thinking, ‘What are you talking about? Robocop? Terminator?’

“And it’s nothing to do with that, but people have these preconceived ideas as soon as you mention certain words. So, mark my words – the next nonsense story will be Police Scotland introducing robots!”