Home > Partner Content > On the road to cutting emissions 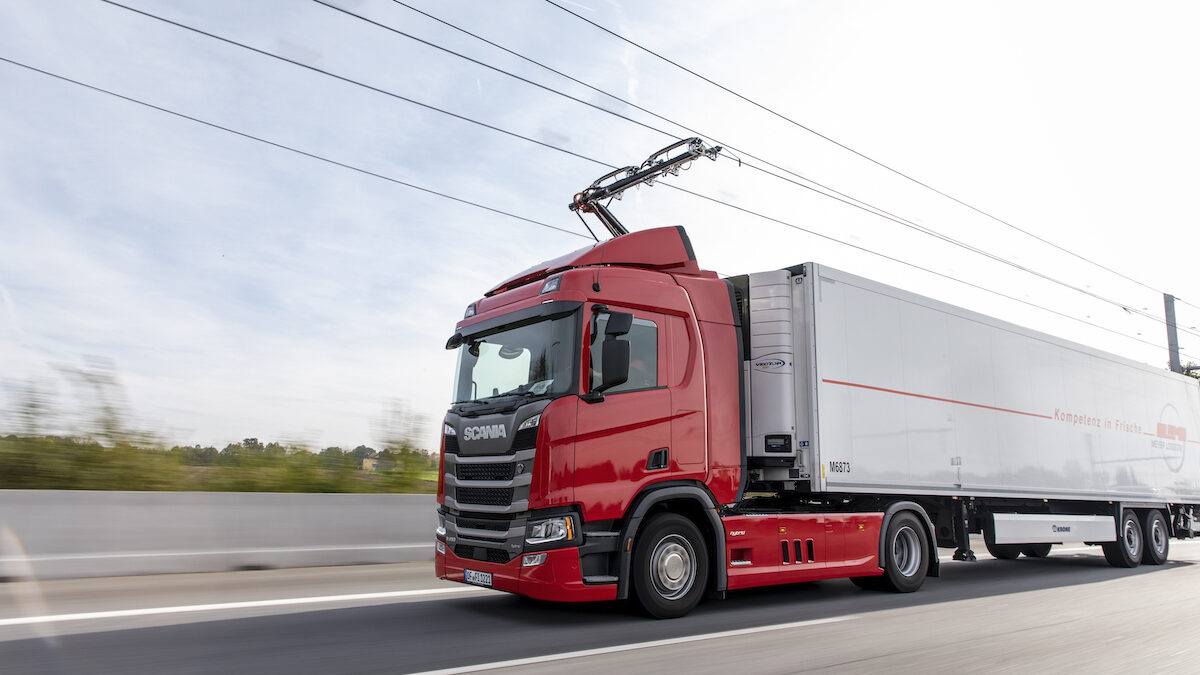 Catenary systems are electric road systems where a vehicle collects its current from overhead lines via a pantograph, much like a train or tram. Photograph © Siemens Mobility
Greentech

On the road to cutting emissions

With transport contributing about 25 per cent of UK greenhouse gas emissions, the race is on to decarbonise vehicles to help hit the country’s net-zero target by 2050.

Freight transport is a particular challenge and, in July, the UK Government awarded funding through Innovate UK to a consortium to lead the UK’s first feasibility study on the electrification of motorways.

This would see overhead electric wires power e-trucks and charge them on the go, like electric train or tram lines, as part of a plan to ban the sale of diesel-powered heavy goods vehicles (HGVs) by 2040.

These so-called electric road systems (ERS), or catenary systems, had a mixed response. The Road Haulage Association raised concerns about the costs (the UK plan is estimated at about £17 billion) and described it as “blue skies aspiration ahead of real-life reality”.

However, the Government announcement drew on a 2020 report by the Centre for Sustainable Road Freight, which said catenary systems were “technically viable, economically attractive and could be achieved by the late 2030s”. In fact, a similar system is already in operation in Germany, using Siemens Mobility’s eHighways technology.

In the third phase of plans announced by the UK Government, just two-thirds of the distance covered by HGVs across the UK would be on the catenary network.

Phase 1 of the plan does not reach Scotland, but Phase 2 extends north of the border on the M74 and A1, and includes the M8 and M9. Phase 3 reaches further north, including the A9 and A90, and into the south-west on the A77 and A75, as well as other central areas.

Phase 1 could start as early as 2025, but each phase is expected to take two to three years, with the whole project potentially running into the late 2030s.

One researcher looking to shine more light on some of the challenges around installing ERS at scale in the UK is Alejandro Gutierrez-Alcoba of the University of Edinburgh Business School.

“Freight transportation must be transformed to hit net-zero targets” says the Marie Curie Fellow whose research work is supported by the European Union Horizon 2020 fund, the Data-Driven Innovation initiative in Edinburgh, construction and engineering firm Costain Group and other industry partners.

“Technologies such as electric vehicles (EVs), combined with the production of electricity using renewable energy, can help to move towards a low carbon economy.

“However, and especially for HGVs required for freight trans- port, EVs have limitations – volume and weight of electric batteries, availability of certain raw materials needed to manufacture them, and tensions when trying to replace internal combustion engine vehicles for electric ones globally. That’s a big challenge.”

Another challenge is the time needed to roll out large-scale systems. How can the investment required to meet emission reductions targets be managed, without undermining the ongoing activity of the logistics sector – and ensuring the network can be used by other vehicles during the transition period?

Gutierrez-Alcoba is also grappling with questions around whether catenary systems should be installed on roads experiencing highest traffic flows – or whether it is best to maximise the length that can be travelled on electricity, either provided by the catenary systems or vehicle batteries.

For freight operators, this aspect is critical when considering adopting the new technology. Favouring the busiest roads only might not lead to the desired effect – to minimise global fuel usage and carbon emissions.

“One advantage of the catenary system is that vehicles can attach and detach from the system, and don’t need to stop,” says Gutierrez- Alcoba.

Route planning under a ERS network is at the heart of the research. “You’re not going to choose the road yourself,” says Roberto Rossi, one of Gutierrez-Alcoba’s supervisors.

“That’s not going to be possible in this system if you have a partially electrified road network where you need to go through a certain route to get from A to B. You need a planner, a tool that tells you where you have to go through so you can recharge yourself dynamically.”

Gutierrez-Alcoba explains that such technology would be similar to current low-carbon routing calculators, and will be vital to maximise the benefits of the catenary systems.

He has four main objectives in his three-year research project. They are to:

• investigate the impact of catenary systems in large road networks in terms of economic cost and mitigation of pollution;

• analyse the benefit of different roll-out strategies for stakeholders such as freight operators and policy-makers;

• study the role of uncertainty regarding logistic operations on the decisions made;

• produce academic contributions in this field.

Gutierrez-Alcoba says: “To achieve these objectives, we will use data from Highways England of hourly HGV traffic density on major roads, and data of vehicles and their route operations from Costain and other logistic partners.

“We will develop mathematical programming models allowing us to calculate optimal routing decisions on catenary road networks and to design roll-out plans to consider economical, physical and managerial factors involved in the deployment of the technology. We will also study the impact of uncertainty.”

“Right now, a truck driver doesn’t have this consideration. The truck is full or empty, it doesn’t really matter – they just deliver according to a certain schedule. When companies like DHL or DPD start using electric vehicles, that consideration will be massive. Leaving off the biggest item first is the most important thing, and we don’t think in that way now.”

The researcher’s findings will present a case study of the UK road network, while data gathered for the project and relevant algorithms will have the potential for further research and useful tools.

Another of his supervisors, Belen Martin-Barragan – stresses that the outcomes have to be practical. “Optimisation models are important in making decisions on what roads should be electrified first, so people believe in the system, and the final result is useful for society,” she says.

“Haulage companies are not going to go on to those electrified roads and support investment if they are put on a road they never use – so the whole project may fail. That’s why we need a plan on what roads need to be electrified first.”

Gutierrez-Alcoba says that introducing ERS on major roads could happen in parallel with smaller and lighter batteries being used during the “last mile” to a final destination, or on interchanges between sections of ERS roads.

Tim Embley, group research and innovation director at project partner Costain Group, says: “The catenary system can unlock other opportunities in the future road network, so I think this research will be part of a transformational journey that industry goes on, in terms of decarbonising the strategic road network. I think it’s a very important piece of the jigsaw.

“The UK has got some big, stringent targets on decarbonisation of the road network so you’ll potentially have government incentives. Hauliers are looking with interest because it will drive greater efficiency and profit margins – and if it gets going in the UK, it will actually be more competitive for them.”

This project has received funding from the European Union’s Horizon 2020 research and innovation programme under the Marie Skłodowska-Curie grant agreement No 801215.

Ways to secure your hybrid workforce

Widening the search for tech talent in Scotland