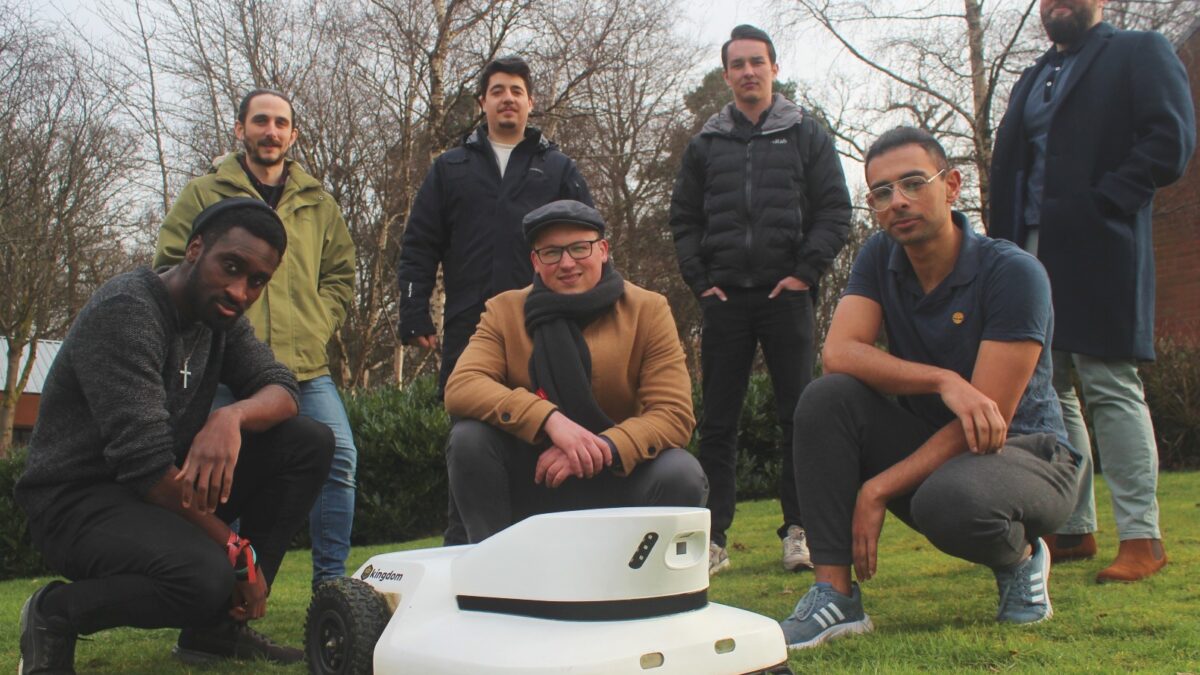 A University of Glasgow graduate is set to scale his commercial robotic lawnmower business after securing a £2m investment from Scotland’s enterprise agency and private backers.

Estonian student Joan Kangro’s firm Kingdom Technologies is sowing the seeds for success after his designs for autonomous robotic lawn mowers for commercial customers took off.

The large machines are ideally suited for large areas of grass to be mown, with the company – set up in 2018 – already listing golf courses and local authorities among its clients.

Robots developed by Kingdom are able to cover areas ten times greater than traditional robot mowers due to smart navigation technologies. With its electric battery, it is also hits the right green notes.

The company has developed a number of novel and patented technologies for mapping, localisation and robotic perception – the robot’s ability to understand and manoeuvre around its environment.

Developing resilient and dependable robotics products requires a long piloting period to ensure they are capable of performing in a range of environments. Kingdom has already run two-year pilots with a number of customers.

The £2m funding will be used to support the growing demand for its services and to expand internationally. The business has nearly 400 pre-orders from customers across the UK, Europe and US. Expansion in the US is a particular focus for Joan.

Investment alongside Scottish Enterprise is from Metaplanet, Ironwolf, Superangel and Specialist VC.

Joan said: “The investment comes at the right time for Kingdom. Having conducted a lengthy period of development, we are now ready to expand our service across the UK, Europe and the US. We know from these extensive pilots that we have a reliable and robust product capable of operating in complicated environments. The next phase of our business is to manufacture more products and expand our offering to the US market.”

Kingdom Technologies has been supported from an early stage by the entrepreneurial team at law firm Harper Macleod. As well as advising on the latest funding round, Harper Macleod has also advised Kingdom on issues such as employment and immigration law, as Joan seeks to double his nine-strong team of robotics developers in Glasgow.

Rachel Miele, in the corporate team at Harper Macleod, said: “After a sustained period of testing and development, Joan has created a product which is attracting attention from global customers. With strong pre-orders and scale-up funding, Kingdom is in a position to grow from its Glasgow base to mow large lawns all over the world. It’s been a privilege to work with Joan since Kingdom was first created, and we are looking forward to supporting him on the next stage of his journey.”

A particular challenge in the growth plan is the availability of skilled robotics engineers. Joan said: “Scotland is good at developing robotics engineers and developers. However, the attraction to then move abroad is very strong. Companies such as Kingdom provide opportunities to put the education into practice, and at the same time contribute to the growing robotics industry in Scotland.”

Kerry Sharp, director of entrepreneurship & investment at Scottish Enterprise, said: “We’ve supported Kingdom Technologies for some time so it’s great to see the company’s continued growth and expansion, including plans to create more Scottish jobs and to target the lucrative US market. The company has cornered a gap in the lawn care market and is making the most of this opportunity. We look forward to seeing what they do and where they go next.”

‘We need a biometrics commissioner for more than policing’