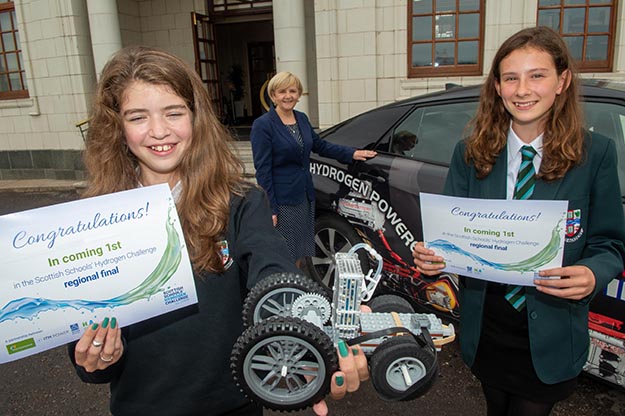 Two Aberdeen pupils are to compete in the grand final of a hydrogen challenge at Cop26 after building the best ‘green’ Lego vehicle.

The two second year Cults Academy students took part in the Scottish Schools’ Hydrogen Challenge alongside nine other groups of two students from the city.

The aim of the contest, which saw 750 local pupils take part city-wide, was to design the most energy-efficient vehicle. The car that travelled the farthest on the zero-emission fuel was named the winner.

The Cults Academy team came out on top after their vehicle travelled a distance of 32.5 metres.

The talented duo will now travel to Glasgow to take part in the grand final during the global climate change summit and be in with a chance to win a Lego Robot Inventor amongst other prizes.

The Scottish Schools’ Hydrogen Challenge is being delivered by partners Arcola Energy, ITM Power and ScottishPower, a partnership formed to help educate people on the importance of green hydrogen in tackling the ongoing climate emergency.

It has seen more than 7,000 pupils taking part from Aberdeen, Dundee, Edinburgh, Glasgow, the Highlands, Perth and Stirling.

The champions, seen photographed with their winning design, were presented with a first place certificate by Aberdeen City Council Leader Jenny Laing.

Laing said: “Promoting STEM [science, technology, engineering, mathematics] subjects to our future workforce is critical, and seeing these pupils getting creative and excited about low carbon solutions at such a young age is really encouraging.

“Building a hydrogen economy is a huge part of Aberdeen’s future and a journey we are already on. Many of the young people in our city will have been on one of our hydrogen buses and we want them to understand this is just one part of our story. The hydrogen industry is creating jobs and opportunities for their future, and ultimately building a cleaner, more sustainable world for generations to come.”

Andy Williamson, head of energy transition at OPITO – a supporting partner for Aberdeen – added: “Aberdeen is uniquely placed to be a global leader in net zero energy skills that are critical to deliver the energy transition.

“Developing the enthusiasm, energy and skills needed to build a net zero energy future starts now. OPITO is delighted to support the Scottish Schools’ Hydrogen Challenge where we encourage the next generation to find the joy in problem solving, get hands-on with technology and inspire an all energy workforce for the future.”

It is hoped it will provide an exciting, engaging opportunity for young people to understand the important role hydrogen can play in a low carbon economy – how it can empower and fuel communities, create environmentally friendly jobs, build a sustainable supply chain and decarbonise transport and industry.