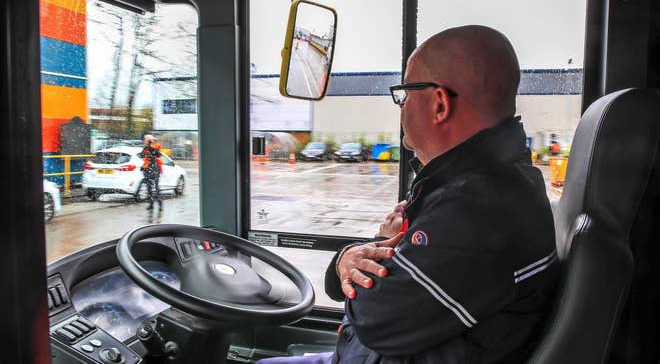 Self-driving buses will come into service later this year between Edinburgh and Fife on Europe’s first full-size autonomous bus route.

Five autonomous buses that could carry 10,000 passengers per week are expected to become “fully operational” on a 30-mile route between Edinburgh Park and Fife, according to the capital’s recently released city mobility plan.

According to the document, which goes before councillors in a meeting tomorrow, the buses feature as part of the city’s commitment to using technology to improve its transport infrastructure.

“Edinburgh has an ambitious agenda for change, including to be carbon neutral by 2030 (supported by an achievement target by the end of 2037). To achieve these changes, Edinburgh needs a new plan for mobility and transport that addresses the challenge of reducing carbon emissions and how people, goods and services move into and around the city. It also needs to address air quality, congestion, accessibility and inclusion, cost of travel and convenience of payment, safety and how to create space for people in the city,” the plan, which goes before the transport and environment committee, says.

In the ‘smart city and innovation’ section of the report, the council outlines how the buses – run by the Perth-based transport giant Stagecoach – are part of the overarching digital strategy launched last year, which aims to ’embrace innovative technical solutions to meet rapidly evolving and changing business needs’.

The report states: ” The emergence of connected and autonomous vehicle (CAV) technology has the potential to bring safer, quicker and more efficient vehicle movement as the risk of human error is minimised, as well as reducing vehicle impact and mileage, as CAV technology usually entails optimal route planning. By focusing on connected and autonomous forms of public transport, rather than private cars, the benefits of public transport can be extended to a broader range of the population, improving inclusion and access.

“A pilot project trialling an autonomous bus service between Fife and Edinburgh Park began in 2020. It is anticipated that when the service becomes fully operational in late 2021 the 30- mile route will be served by five autonomous buses and could carry 10,000 passengers per week.”

CAV Forth, as it is termed, is a collaborative project part funded by the UK Government’s Centre for the Connected and Autonomous Vehicles (CCAV).

A consortium of UK partners are in the process of designing and developing a fleet of full-size autonomous buses that will service a new Stagecoach-operated route running from Ferrytoll P&R in Fife, across the Forth Road Bridge into Edinburgh Park’s transport interchange.

The project has emerged from an existing partnership between Fusion Processing, Alexander Dennis Ltd and Stagecoach which has already automated a full-size bus able to drive itself around our Sharston depot in Manchester. Other partners include Napier University, Bristol Robotics Lab and Transport Scotland.

Travelling mostly on motorways controlled by Transport Scotland, the single deck autonomous buses will be required to safely interact with other traffic in a live road environment, negotiating junctions and bus stops while carrying fare-paying passengers at speeds of up to 50 mph.

Estimated to cost around £6.1m, Project CAVForth is part-funded by the Centre for Connected and Autonomous Vehicles (CCAV), delivered in partnership with Innovate UK. It is part of the UK Government’s £100 million Intelligent Mobility Fund, supporting the Future of Mobility Grand Challenge.

A Stagecoach spokesperson said: “Stagecoach and all the partners remain committed to delivering the trial of the UK’s first autonomous bus service, which is a ground-breaking and exciting project. We are finalising the full project timing and detail, and the intention is for the trial to start later in 2021.”