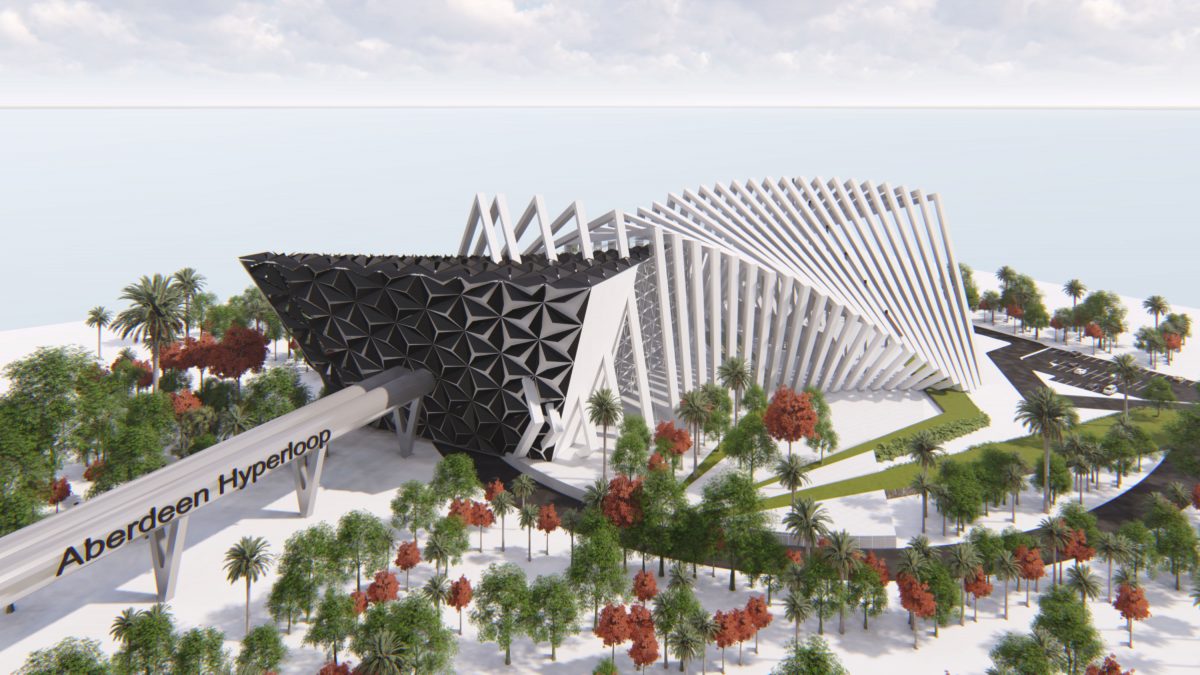 Students have released their innovative designs for a series of sustainable and ambitious projects, including Scotland’s first ‘hyperloop’ transport system – high-speed trains housed in sealed tubes.

Budding architects at Robert Gordon University (RGU) in Aberdeen have been developing a series of ‘forward-thinking’ projects for the north east and have released their work onto ‘opensea’ – a marketplace for rare digital items.

The young innovators are among the ‘first in the world’ to publish their work as non-fungible tokens (NFTs), which are unique digital objects housed on a blockchain, the technology behind cryptocurrencies.

NFTs, often described as a registration licence number for a particular unique object, provide a platform for artists to break through previously inaccessible markets, or in this case, for architectural designers creating original designs.

As well as a hyperloop, the students have designed a vertiport station – a type of airport for aircrafts which land and take off vertically – high-rise towers and community centres in Aberdeen. Each architectural design addresses future challenges and has a particular focus on zero-carbon issues.

A hyperloop is a revolutionary new form of eco-friendly transport conceived by US tech entrepreuner Elon Musk. Under his original design, passenger capsules are propelled through sealed tubes which have virtually no air resistance and are currently in development by a number of companies.

It could see passengers travelling at over 700 miles an hour in a floating pod which races along inside the giant low-pressure tubes, either above or below ground.

In 2017, Virgin Group founder Sir Richard Branston claimed new hyperloop technology which his company has invested in will take passengers from Scotland to London in 45 minutes.

Theo Dounas, learning excellence leader at the Scott Sutherland School of Architecture and Built Environment, said: “Our work on the applications of blockchain technologies in architectural design expose the MSc advanced architectural design students to the cutting edge digital tools that can be used for design and design management.

“To connect our research into building information modelling and blockchain with our day to day teaching activities in the MSc advanced architectural design, we set up a week-long, intensive workshop where the students were able to design and model their own designs on the blockchain.

“The students were excited about the workshop and working with blockchain technologies, as it allowed them to develop new business and operational models for architectural designers and their engagement with decentralised communities.”

NFTs are currently trending due to the sale of popular digital assets such as the first ever tweet by the founder of Twitter and the original image behind the 2005 ‘disaster girl’ meme.

The Scott Sutherland School has already built mechanisms to create NFTs for building components and use the blockchain as an information layer for a circular economy for the Architecture Engineering and Construction Industry.