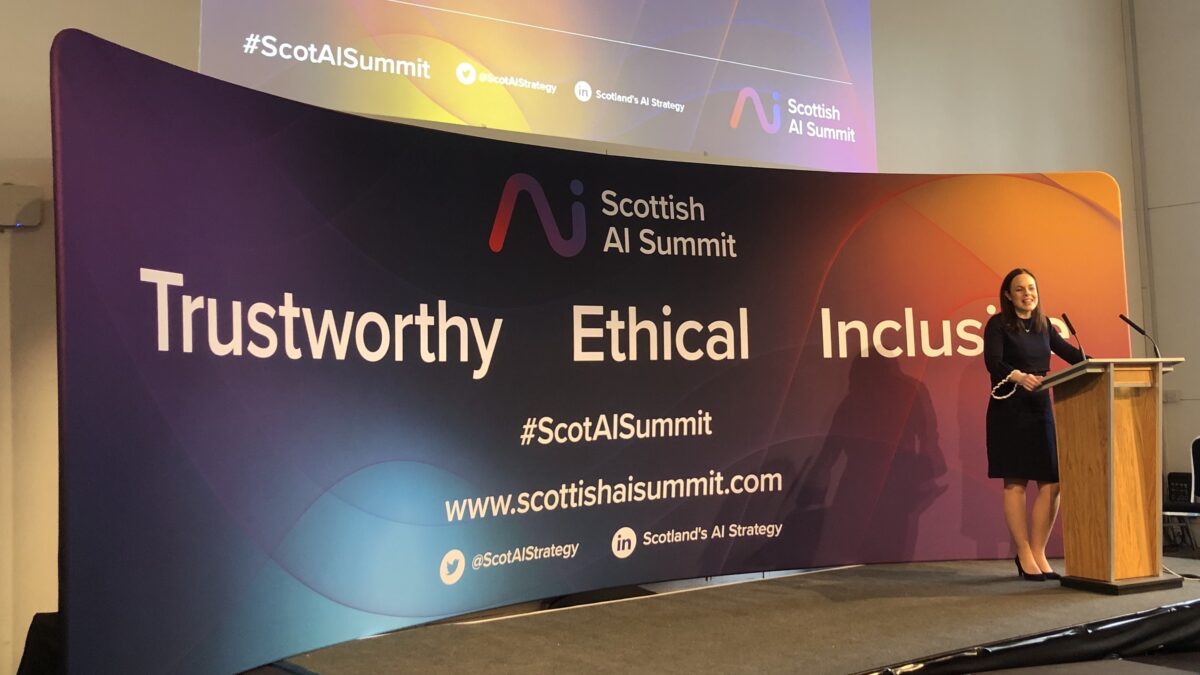 Securing the public’s trust is “absolutely essential” if Scotland is to “fully unlock” the potential of artificial intelligence (AI), the Scottish finance secretary has said.

Kate Forbes has urged Scotland’s data leaders and policymakers to work with the general public to help them “recognise the value” of data and AI.

Ms Forbes, who spoke at the Scottish AI Summit in Edinburgh this week, said it was her job to “bridge the gap” between experts and citizens.

The conference marked one year since the publication of Scotland’s AI Strategy, which sets out a “vision for AI in Scotland” and aims to make the nation a leader in the development and use of “trustworthy, ethical and inclusive AI”.

Addressing an audience of 200 in-person and 500 online, Ms Forbes said: “I’m a bridge between conferences like this, where there’s a hugely exciting and very enthusiastic approach to what is possible with AI, and a general public, which knows about AI, which thinks about AI, but has a whole host of different views on AI.

“Making sure that we bring the public with us – because they can see in the way that we develop and adopt AI, that there is perfect integration, there is an ethical framework, there is an inclusive approach – and they can have trust in the work that we do.

“And if we get that right – now, in early 2022, when the world is fast evolving, when the potential couldn’t be more exciting – we can go all the way to integrating data, and digital and AI, in our services, in our approach, and we can ultimately solve some of the world’s biggest problems.”

Ms Forbes told delegates that it was important that work to develop the AI Strategy aligns with other initiatives and programmes in Scotland’s wider public sector to solve challenges faced by society.

“Whilst there’s a lot of us that understand that – my job, our collective job, is to make sure that is not just a niche area of interest, with the same individuals interested in solving the problems from an AI perspective.

The conference, which took place at Dynamic Earth in Holyrood on Wednesday 30 March, was organised by the Scottish AI Alliance.

In terms of what’s next, Ms Forbes said that a new AI hub for life science, NHS and social care – which the government has provided £20 million for – will create AI innovation and commercialisation capability in Scotland linked to the AI Strategy and other initiatives.

She said the AI Alliance is continuing efforts to improve the public’s understanding and adoption of AI and formulating further plans for national and international engagement.

In addition, work is being undertaken to better leverage in investment, researching and development funding, “where there are many other links to Scottish government programmes”.

The finance secretary, who is chair of the AI Strategy steering committee, also welcomed the news that applications for the next Edinburgh AI Accelerator are now open, which will focus on using AI for transformative change.

Ms Forbes’ keynote was followed by Albert King, chief data officer at the Scottish Government, who announced that a new website for the Scottish AI Playbook, an “open and practical guide to how you do AI in Scotland”, was launched that day.

The summit also coincided with the publication of the State of AI Report, which sums up the progress made in delivering the strategy’s actions over the past 12 months.

Other high-profile speakers at the conference included Irakli Beridze, head of the Centre for Artificial Intelligence and Robotics at United Nations Interregional Crime and Justice Research Institute, and Virginia Dignum, professor of responsible artificial intelligence at Umeå University in Sweden.

It was revealed by Les Bayne, chair of The Data Lab, during an evening drinks reception after the event that Brian Hills has moved permanently into the role of chief executive at The Data Lab, after serving in an interim capacity following the departure in January this year of Gillian Docherty.