Home > Justice & Policing > Now showing: no blockbusters, no matinees, but a drama with an innovative plot 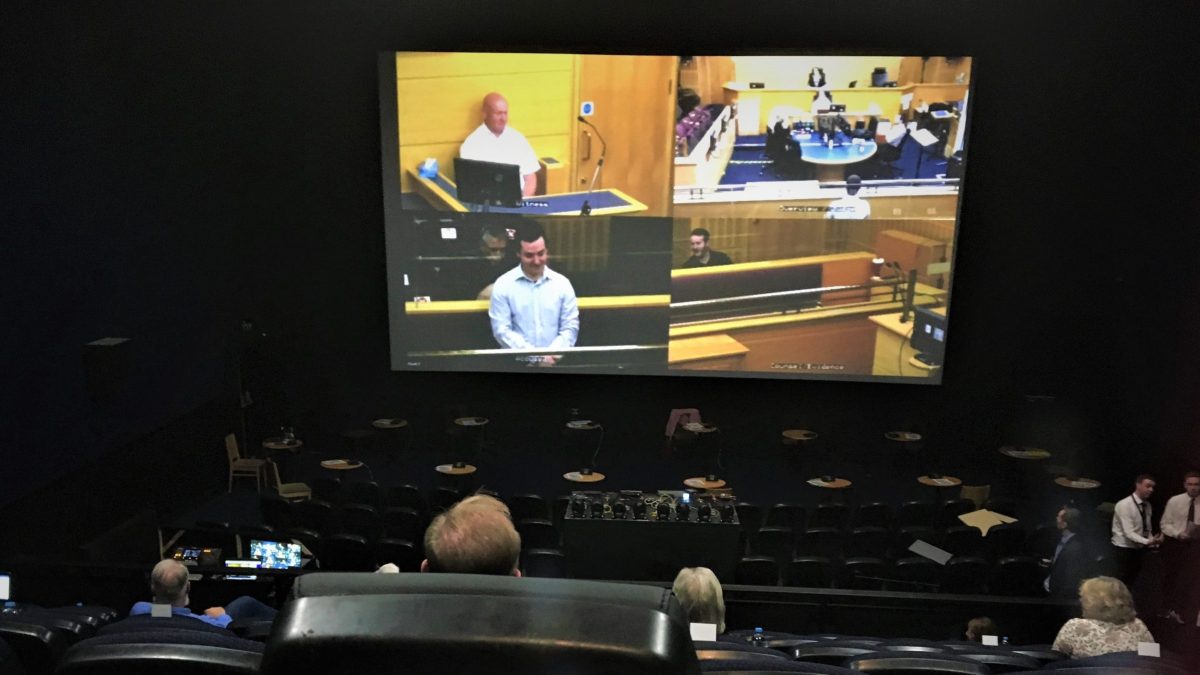 When jurors enter the solemn surrounds of a courtroom in Scotland today, centuries old sandstone edifices and wood panelling have largely given way to steel and glass, covered up popcorn kiosks and empty film poster hoardings.

They will be filing into an Odeon cinema complex, but there are no blockbusters, matinees or trailers to speak of; instead, jurors are greeted by courtroom staff in a manner that befits the seriousness of participating in a criminal trial.

Interactions between jury members, defence and prosecution counsel, judges, victims and witnesses are now done online over a Webex platform designed by the American tech giant Cisco. Jurors take their seats (much comfier than the hard benches in court) and watch the proceedings from afar. On their screens, they see a composite view of the courtroom – the Edinburgh or Glasgow high courts – as cameras display all the main protagonists split into quadrants.

The 15 jurors themselves are filmed individually and rendered onto a video wall in the courtroom, allowing the process to be as two-way as possible. When it comes to their deliberations, the jurors are brought together in an oval-shaped space at the bottom of the cinema’s main auditoria, seated two metres apart, with microphones allowing their voices to be heard by their fellow panellists.

The remote jury centres have been up and running since September 2020, after six months of disruption that severely curtailed the ability to conduct judicial business across the country. In the interim, courts had been carrying out a reduced quota of cases, but social-distancing requirements meant that jury members had to watch courtroom proceedings from adjoining rooms, which limited the capacity of the building as a whole.

A working group, chaired by the Lord Justice Clerk, Lady Dorrian, was established by the Scottish Courts & Tribunals Service (SCTS) to find a solution, and what has taken effect is arguably the biggest single innovation in the history of the judiciary in the UK. Scotland was the first of the home nations to set up cinema-based jury centres. It has transformed a traditional profession often seen as immune to change. And for jury members themselves, the situations they find themselves in are actually not so strange; it is a diary commitment that is more than likely to be a one-off in most people’s lives, as Tim Barraclough, Executive Director, Judicial Office, SCTS, explains.

“The most important thing was that we got the justice system back up and running as effectively and safely as possible, and that was what happened,” he says. “There was a huge amount of goodwill and support – which stemmed from the working group involved in designing the new approach, feeding in a number of requirements at the outset, to the practitioners and other participants. And the feedback so far has been pretty positive; there will be a proper evaluation in the longer term but so far, because everybody was on board, things have worked out pretty well.”

He added: “For the juries, they don’t really know any different. It’s not as though they have done several trials in their lifetimes. We took a lot of advice from folk, particularly victims’ representatives, who said they didn’t want people thinking they were part of an entertainment show when giving evidence. So we put a lot of work into making sure that everybody strongly felt that they were turning up for a court proceeding rather than at an entertainment venue.”

The tech itself has held up well and there is a high level of assurance in place from the supplier, says Barraclough. Both the Odeon complexes in Fort Kinnaird – serving Edinburgh – and Braehead, for Glasgow, were chosen largely because of the robustness of their IT infrastructure and good connectivity, something that became quickly apparent when the working group conducted its market scoping exercise for suitable venues over summer.

Once the agreement was in place, a lot of bespoke work had to be carried out, including tweaking camera angles – giving all participants a good view – and lawyers had to curtail any tendencies to roam during speeches. There is a complete backup system should the main tech fail, and time glitches, to be expected of audio-visual conferencing suites, have so far been minor.

High courts are now running back at full capacity. According to the latest figures from SCTS, high court evidence-led trials are actually 17 per cent higher than the average monthly pre-Covid level, with the normal capacity for 16 trials per day successfully restored.

Remote jury centres are being extended across Scotland to restart sheriff court jury trials, with Lothian and Borders and Glasgow and Strathkelvin having commenced at the beginning of December. The other sheriffdoms will follow in the early part of 2021. While these are encouraging signs in getting back to normal operating levels, scheduled cases are twice the normal level and the average waiting period for trials has doubled to 12 months in the high court, 15 months in sheriff solemn and six months in sheriff summary hearings.

Like all parts of the public sector, it will require investment from government on top of the £12m it has committed to remote jury centres in order to continue to resource a legal profession seriously stretched by the pandemic.

Barraclough is keen to emphasise, though, the progress that has been made, and which he thinks will be hard to reverse in many instances. Lord Carloway, the Lord President – Scotland’s most senior judge – has also long been keen to modernise the judiciary, and Barraclough credits both him and Lady Dorrian as enthusiastic supporters of tech.

Aside from the remote jury centres, much of civil courts’ work – as well as appeal hearings, proceedings based on written submissions or legal arguments – had already been moved onto the Webex platform. Another area that needs further development is the ability of police stations to host custody hearings remotely instead of transporting the accused to court, which could reduce the burden on the justice system.

The courts system will also need to continue to evolve its own practices digitally, and consider how to serve vulnerable people, whether those who find it hard to deal with the justice system or those who have problems with travel, for whom technology could offer a better solution.

Barraclough says: “Those issues are already being looked at and this has helped us to develop the trust in the technology to be able to do that, and the willingness to consider the idea.

He adds: “The key to the success of this was getting all the different players and representatives together to agree on a way forward and to get their input. That was really important and we have really valued the contributions from the different interested parties.

“What this pandemic has done has given a huge amount of energy to a great deal of innovation that would probably have taken an awful lot longer if we were just trying to do it in the normal way. It has generated a huge amount of interest and excitement in coming up with these solutions and we hope to capture that energy and enthusiasm, and continue with the pace of change, into the future.”