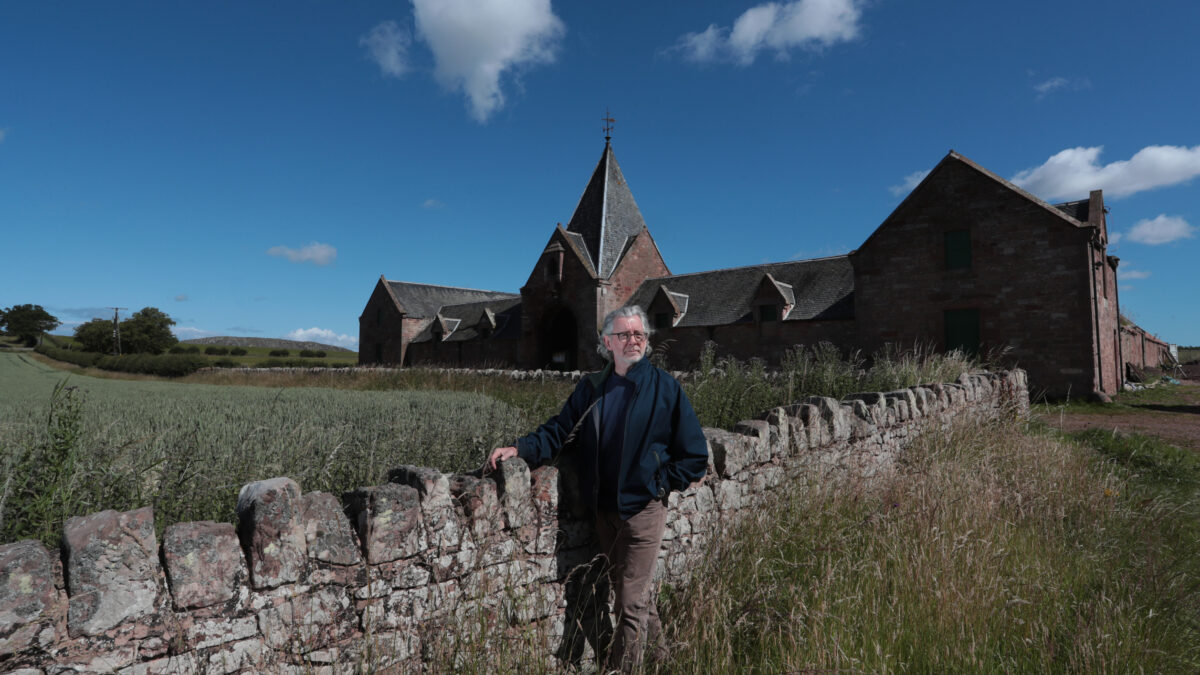 What do the words “economic catalyst” bring to mind? Most likely, you are not thinking of a historic farm in the East Lothian countryside – but that could be about to change.

Scottish tech entrepreneur George Mackintosh is opening Papple Steading – an example of the model farms of the agricultural improvement movement – as an exclusive retreat for businesses and professional groups this month.

The founder of software testing company Eggplant has transformed the sprawling estate which he purchased in 2017 into an “economic catalyst” for businesses that will act as a “stimulant” for their ideas.

But launching the business hub is just phase one of Mackintosh’s ambitious vision for Papple Steading, which will also feature an agricultural heritage museum and a conference centre, due to open in December 2023 and December 2024 respectively.

Last June, Eggplant – which Mackintosh formed in 2009 – was acquired by California-headquartered Keysight Technologies for £238 million.

The tech guru also previously founded web conferencing business Geoconference in Glasgow in 1996, with the company being sold to Global Crossing – now CenturyLink – in 2000.

Now Mackintosh, who is the son of a Highland farmer, is combining his head for business with his roots in agriculture.

Startup or scale up?

What does Mackintosh think of Scotland’s tech economy?

“It could do better on the report card,” he says. “We shouldn’t be preoccupied about Scotland’s tech industry within Scotland. I think we should be preoccupied about businesses that are here that might become significant internationally. That’s what we should all be thinking about. Because Scotland doesn’t have an economy or a population that would support a really significant tech industry,” he says.

According to the Scottish Government, Scotland is home to a “thriving tech ecosystem” with over 1,500 companies that contributed £4.9 billion gross value added (GVA) to Scotland’s economy in 2019, accounting for 3.5 per cent of total GVA.

GVA per head for the tech sector is 40 per cent higher than for the economy as a whole, making it a significant contributor to Scotland’s economy. This success has elevated Edinburgh to the most active tech community outside London, closely followed by Glasgow in fourth place.

“We probably are. But we’re not scaling the ones we’ve got sufficiently. If we actually stopped the clock, and had no more tech businesses, and then diverted all our energies and all our private funds and our public funds to scaling the ones that we’ve got, that might be a better economic solution then encouraging more new entrants,” Mackintosh says.

“Now, I’d never discourage new entrants. But the point is that we’ve got to think scale, and scale comes from international.”

Mackintosh’s ideas for the sector echo aspects of Mark Logan’s independent review of the Scottish tech ecosystem, which includes recommendations to provide support for the Scottish tech meet-up network and the creation of a tech-scaler national backbone.

Former Skyscannner chief operating officer Logan has recently been appointed by the government to oversee work to establish Scotland as a “world-class technology hub”. The programme will be delivered with £7m Scottish Government funding in its first year. This will include a £1m fund to make strategic investments in organisations and activities – such as tech conferences, meet-ups or training programmes – that create the “best possible environment” for Scottish startups to succeed.

Karen Meechan, chief executive of tech trade body ScotlandIS, agrees that tech meet-ups, such as Papple Steading’s business destination, are crucial for the sector. There are currently 200 such hubs running across Scotland’s tech ecosystem.

“Collaboration and peer-to-peer support is crucial for tech companies to grow and evolve, and this comes mostly from networking and creating relationships at events such as conferences and training programmes,” she says.

“They provide opportunities to promote your business and often these meet-ups can be what keeps a business going – by learning first hand from the experiences and successes of others. It is imperative that we don’t lose that sense of support and collaboration as we come out of the pandemic and get back to meeting in physical environments again as soon as it’s safe to do so.”

On whether the government should invest more in scaling up as opposed to funding startups, she says: “Startups are the established success stories of the future and the support given at their early stage is crucial for them to realise their potential. Likewise, larger more established businesses play an important role in contributing to the economy, creating jobs and enhancing Scotland’s reputation as a global tech hub. For these reasons they need to be encouraged to stay in Scotland.”

Is the government doing enough?

Mackintosh, who is the vice-chairman of the CBI’s SME Council and an associate at the University of Edinburgh Business School, thinks the government could do more to foster Scotland’s tech economy.

He says: “Even if they were doing a good job, they could do better. If I’m a paid-up member of any party, it’s the enterprise party, and that enterprise party doesn’t have much of a voice in Scotland. The enterprise party is not a political party. It’s a way of thinking that’s about promoting business. And there’s just not enough people voting in that direction.”

He added: “We hear all the time about initiatives… maybe we should be talking more about earning initiatives. If you were in a household, you and your other half, and all you were thinking about is ‘what shall we spend, what shall we spend’ – that’s not great way to run your household. I think in the Scottish household, we’re spending a lot of time thinking about ‘how can we spend?’, not ‘how can we earn?’

Meechan takes a different view, believing the Scottish Government has “shown its support for the tech sector” though initiatives such as its new AI Strategy published in March and the appointment of Mark Logan to lead the tech scalers programme.

But she warns that many companies need more assistance than usual as they adapt to the digital economy accelerated by Covid-19. “The sector is one that continually evolves and innovates, meaning constant investment and support is needed. The pandemic has seen a lot of businesses pivot to digitally transform, too, and doing this is still a process for a lot of organisations who need guidance and investment to see it through.”

She says: “They are doing quite a bit to support the tech industry. If you look at the support that’s been put into digital transformation of businesses and the FinTech cluster and things like the Southeast of Scotland City Deal, which is focused around data driven innovation, I think there is actually quite a lot of activity going on that maybe doesn’t all come under the banner of tech, but supports that kind of wider ecosystem of tech companies and organisations.”

However like Mackintosh, Reid thinks the sector “could benefit from more support”.

Though there is room for improvement, it is safe to say the future looks promising for Scotland’s technology industry.

Not only is the sector growing one and half times faster than the overall economy, four Scottish businesses were also recently identified as ‘futurecorns’ – companies set to achieve a $1b valuation.

They include Edinburgh-based Roslin Technologies and NuCana BioMed, Motherwell’s Amphista Therapeutics, and Interactive Investor in Glasgow.

And despite the public health crisis and uncertainty caused by Brexit, Scotland’s digital sector has remained resilient and optimistic, according to ScotlandIS.

The not-for-profit organisation’s recent survey of the tech industry revealed that growth within the sector is high. Almost half of participants increased their sales and profit margins over the past year and 70 per cent plan to recruit more staff in the next 12 months.

Initiatives like Papple Steading’s business destination should only serve to further cultivate a balanced tech ecosystem.

Meechan says: “As a sector we will continue to grow through collaboration and can look forward to a year of strong growth to come. As we emerge from the Covid-19 pandemic, we have an opportunity to build back better, to reshape our society, to deliver highly skilled and fulfilling jobs and to drive efficiencies and productivity gains in our public services and established businesses.”

Power up a net zero future through digital